It’s Friday, and you know what that means: #FollowFriday, an opportunity for us to show some appreciation for the wonder we call Twitter – more specifically, someone related to Doctor Who you should follow.
And it’s Sixth Doctor Week at the DWC. No prizes for guessing that today’s #FF is… Colin Baker!
Colin obviously played the Time Lord between 1884 and 1986, but previously appeared in Doctor Who as Commander Maxil in Arc of Infinity (1983), the first of only two actors to play both the main role and a guest role (the other being Peter Capaldi).
He first came to prominence, however, in The Brothers, in which he played the manipulative merchant banker, Paul Merroney between 1974 to 1976, working alongside directors like Timothy Combe (Doctor Who and the Silurians; The Mind of Evil), and Lennie Mayne (The Three Doctors; The Hand of Fear). Baker has since starred in I’m A Celebrity… Get Me Out Of Here!, Doctors, and the very first episode of Jonathan Creek.
A regular at conventions, Baker’s incarnation of the Doctor has proved particularly popular at Big Finish, and gaining new companions like Evelyn (Maggie Stables), Constance (Miranda Raison), and Flip (Lisa Greenwood).
But before we delve deep into his Twitter feed: a game. Colin tweeted this:

Name this Doctor who actor with whom I had lunch today pic.twitter.com/FQBkROhWsJ

So who do you think it is? A further clue:

Nobody's got it yet. He or she has a birthday this week. The image is from a birthday balloon pic.twitter.com/wb7eOtr31l

We’ll reveal the answer later on. Well, Colin will, at least.
Baker’s very active on Twitter, particularly when it comes to politics and animals, two things he’s naturally passionate about. He’s a great ambassador for animal charities, actually, so expect plenty of love for pets.

Thought for the day pic.twitter.com/uZtnKxI2Z4

Watching that smug cultural vandal Whittingdale justify the erosion of our most valuable asset. The BBC. Sad day

I've unfollowed friends because of the stream of personal abuse about politicians they don't like. Can we start the healing process please?

Both of the 'major' parties are behaving like characters from Julius Caesar and/or Macbeth!

And there’s plenty to please Doctor Who fans.

The sun is shining, the birds are twittering and I am off to Big Finish #aperfectday

Fan at Gally yesterday thanked me for spelling her name correctly. Joanne. Apparently @WilliamShatner got it wrong. Trouble with Scribbles?

Okay, so briefly back to that game…

Not Troughton, Olivier, Waterhouse either

Nor Briggs nor McQueen

Before we announce who that actually is, here are a few miscellaneous tweets from good old Sixie:

The man who invented predictive text has died. His funfair is next Wednesday.

Strange watching War and Peace. 45 years after being in it myself on the BBC Memories come flooding back.

First day of a short break in Cornwall. This is our view. And it sooooo wonderfully still and quiet. Bliss pic.twitter.com/24AbJHsv5U

And the correct answer is…

Yes it was my old friend Simin Williams aka Chunky who will be 70 on Thursday. Sweet young chap 🙄

Simon not Simin of course

Ah, Chunky Gilmore. I feel a rewatch of Remembrance of the Daleks is in order, followed by Revelation of the Daleks.
Follow Colin @SawbonesHex. 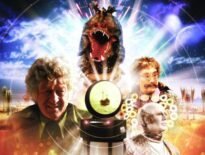 Features Why I Love Doctor Who – Carnival of Monsters…
Features Season 23 – When Doctor Who Went On Trial
11
%d bloggers like this: