‘When this presentation is finished, you will have a choice.’

Doctor Who is not trivial.

In amongst humour and drama, character and adventure, space battles, mysteries and Yetis on loos in Tooting Bec, there are moments when Doctor Who attempts the most demanding of philosophical conundrums; what do you do when there are no good choices to be made? Okay, it doesn’t pretend to write a deep academic treatise; it’s a family show telling a fable wrapped in an adventure. But it trusts that its audience has enough brain and heart to think about it for themselves. It’s not a new fable; but Steven Moffat takes it a single, beautiful Who step on from the greats who tackled it before him.

There are lots of things to like about The One With the Space Whale (though some call is The Beast Below): Amy’s first foray out into the universe; her wonder, excitement, and thirst for adventure; her journey in space and time, and in experience. Her being lit like a Dutch Interior as the light dawns on her that she can save the whale.

Youngest-ever Doctor Matt Smith showing us, only his second story in, how powerful, alien and un-childlike he can also be. His pain sensing the creature’s agony when he first encounters a tentacle-in-distress is a masterclass in show-don’t-tell. His rage at the counsel of despair: “Nobody human has anything to say to me today!”

The tentacles waving with a hint of Macra, the early hints of whalesong in the soundtrack, the lighthearted political digs like the Doctor’s “every five years everyone chooses to forget what they’ve learned: democracy in action.” The queen with a revolutionary’s mask and intentions. The slippers and nightie. And the chute into digestive gunk. “Top layer, if you want to sa–” oh, wait, that’s another story.

I particularly enjoy the shock reveal of the Smilers’ third face even before the titles, the police state rapidly sketched in because that is not the point of the fable, merely the backdrop. I like the children’s honest sensitivity to the fact the Something Is Wrong That You Don’t Talk About. Mandy is realistically played; her red school uniform’s resonance with little red riding hood is no coincidence. There’s an animal with big teeth coming, and some adults with authority and the tools to kill it. But which one’s the baddie? By the time it’s spelled out, we already know there’s more to this than the surface shows.

Liz 10: “There’s a darkness at the heart of this spaceship.”

But any Doctor Who fan would have been expecting that for a long time. Especially if they’d read Dostoyevsky.

The underlying question, the rather literally portrayed dilemma, is not new to fiction, nor to science fiction. On what is our society built? If there are winners, do there have to be losers? One of my favourite writers, Ursula le Guin, wrote a prize-winning short story in 1973, called The Ones Who Walk Away From Omelas. But don’t expect to come away with a big happy grin on your face. As I write in Covid-19 lockdown, there are miserably impossible decisions to be made about who gets PPE, a test or an ambulance, how many of the critically ill we can save, and where we store mortal remains of people’s loved ones. While lockdown protects many, some suffer violence and mental collapse, confined at home. So the idea that our happiness, safety, or future could be a teetering construction wrought at the cost of someone else’s suffering is not fiction to us.

Back in 1880, Fyodor Dostoyevsy wrote The Brothers Karamazov. In a short but utterly central extract, the brothers tackle a philosophical argument on which pivots the atheism of the one and the faith of the other. And it’s all about means not justifying ends – the boiling down to bare bones argument: if ultimate happiness, peace, and prosperity for all depended on the torture to death of one small child, would it be worth it? Can a world with such evil in it, whatever the overall benefits, be considered good?

Ivan: “Tell me yourself — I challenge you: let’s assume that you were called upon to build the edifice of human destiny so that men would finally be happy and would find peace and tranquility. If you knew that, in order to attain this, you would have to torture just one single creature, let’s say the little girl who beat her chest so desperately in the outhouse, and that on her unavenged tears you could build that edifice, would you agree to do it? Tell me and don’t lie!”

“No I would not,” Alyosha said softly.

In le Guin’s fable, the rest of society does – we are told – enjoy its guilt-free happiness because the suffering of one, single victim is so far outweighed by the perfect harmonious life of every single one of the others. The greatest good for the overwhelmingly greatest number; one tiny price to pay.

And like any blunt and unsubtle rule utilitarianism, it feels inhuman, instinctively wrong. If you can’t make an omelas without breaking even one small egg, should we be making them at all?

At the end of Le Guin’s story there are a few who walk away from that closed loop system, they too know it is wrong. They reject the terms and ‘know where they are going,’ perhaps to build a better world not dependent on the torture of another. That’s all very well, but my unsophisticated sense of justice demands they at least try to free the child first. Perhaps they feel they don’t have the right to impose their choice on the rest of the ‘happy’ citizens, to destroy everyone else’s happiness for the faint possibility of restoring some degree of happiness to the one damaged child.

What happens when there are no good choices to be made?

Liz 10 has that power; she could make the choice for all her subjects; ‘I will not acquiesce to this abominable contract. I will accept, on behalf of all my subjects, the consequences of freeing the child’. But many times over the last 300 years, she had chosen to accept the terms Alyosha would not; accept the torture. And forget.

The Doctor cobbles together an unsatisfactory but workable third way, angry and loathing humanity and his own actions. It hurts to watch this story; it should.

But this is Doctor Who; this is the reason we love the show. This is what Moffat does best. He says Omelas built their dilemmas on a false premise; the evil they thought necessary was a human assumption not based on the facts. They ask “if society depended on…” But what if it doesn’t?

Amy, so new to the cost of the Doctor’s modus operandi and ‘getting involved’ looks, learns, watches, and thinks – and she makes her choice on facts others have failed to notice. Everyone else has voted to kill the unborn moon dragon but she chooses to – oh wait; that’s another story.

Amy is our identification figure: the companion. And as the presentation finishes, we have a choice to make.

What if there’s another way?

Because there’s some good in this world Mr Frodo, and it’s worth fighting for.**

We live as though the world were as it should be to show it what it can be.***

And occasionally, just now and then, when the wind’s in the right direction, the good in the world smiles back. It turns out the victim wasn’t angry, desperate to escape, or resentful. It didn’t need forcing to help because that’s why it came in the first place. “Our children screamed”, recalls Liz 10. “It came — like a miracle.” All they had to do was ask. Trust its extraordinary kindness, knowing that whatever it had to do until it was released, it could never hurt the children. And once released, it carried them all onwards unforced, a gift of grace despite all they had put it through.

And yes; I’m writing this in Holy Week. But that’s another story too.

* Do I really have to tell you the first one? 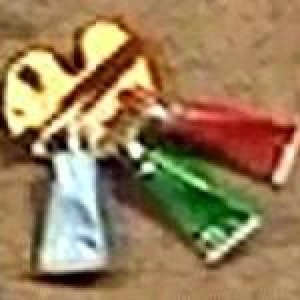 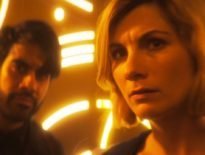 Features Here’s What the Doctor Who Companion Thought… 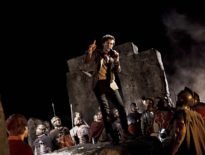