Big Finish has provided us the goods on Russell’s behalf, and, given the likely cost of hiring a knight of the realm and all-round national treasure, it’s perhaps unsurprising that he made his debut in a one-hander production. But all the better as Tim Foley’s clever script gives the listener 78 full minutes of Sir Palin in the catchily named Tropical Beach Sounds and Other Relaxing Seascapes #4.

The concept of this audio is a haunted self help tape, and I thought the best way to listen to it would be alongside two people who had no idea that it was in fact a Torchwood audio drama and not a just a new production during lockdown by the man who narrates Clangers.

For the first 10 minutes or so, this audio genuinely works as a brilliant calming escape from our current collective home-bound existences, and the variety of tropical beach sounds and other relaxing seascapes coupled to Palin’s tones really sell the idea that life is a summer holiday right now. It’s the same immersive effect that Palin delivers in his famous television travelogues.

The immersion is important for narrative functioning, as this whole story is delivered in the second person. You are literally part of the action. Which makes it all the more fun seeing my very relaxed colleagues look increasingly less relaxed when the inevitable switch to a darker tone occurs. And boy can Palin deliver commands of violence that sounds as sincere as his usual politeness.

The members of Cardiff’s Torchwood Three, circa the first two seasons of the show, all make appearances in Tropical Beach Sounds and Other Relaxing Seascapes #4, and your (yes, your) interactions with Captain Jack Harkness are predictably diced with comments about sexual attraction. Palin makes the listener get close to each member, especially Jack, and possibly the best way of describing the experience is as if The Doctor Who Experience were based around Torchwood and all its adult content. Unlike your usual interactive adventure based around exploring your favourite TV show, there is no guarantee of getting out of this story alive. Potential Death By Palin is as good as it literally sounds.

Foley’s cleverest trick in this innovative script, which takes a huge risk with its format and makes it work with apparent ease, are the moments when the listeners who have bought their CD to genuine seek some relaxing sounds start to think about turning it off. As the tone gets darker, Palin tells the listener he knows they’re having doubts about the effectiveness of the self-help tape, and attempts to convince them to stay listening if they want to become a better person as originally advertised.

And you can’t say no to a request from Sir Michael Palin. 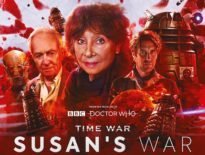