Arthur Darvill is back as Eleventh Doctor companion, Rory Williams, for audio company, Big Finish, as we explore the legends of The Lone Centurion!

Rory returns in his own full-cast audio series, as the guardian of the Pandorica for nearly 2000 years.

Legend tells of the Lone Centurion — a mysterious figure dressed as a Roman soldier who stood guard over the Pandorica, warning off those who would attempt to open it; a constant warrior whose story appeared in the folk history of a dozen civilisations.

“I’ve worked with Arthur on a few Big Finish projects before now, so I know first-hand how much he loves the audio medium. It’s one of the reasons we ended up doing Frankenstein together, where he gives an electric performance as Victor! It’s lovely when an actor wants to do more, but I knew he was nervous about revisiting Rory and upsetting established story arcs, which is how The Lone Centurion came about.

“Set during the centuries he waits for the Pandorica to reopen, these stories allow us to explore new sides to the character while remaining true to his on-screen journey. As soon I started suggesting it to Arthur, I knew we were onto a winner…”

“It seemed like an offer I couldn’t refuse. As soon as I read the scripts, I was like, ‘Oh well, they totally get it, they’ve really nailed his voice’. It’s been a lovely way to revisit it in a very different way to what it was, but to do something more with this character. It’s funny but also quite epic, which is so lovely with what you can do on audio: to have these huge stories which in another medium would break the budget!”

The Lone Centurion: Volumes 1 and 2 are now available to pre-order as collector’s edition three-disc box sets or downloads from just £16.99 each. Volume 1 is due for release in May 2021, with 2 to follow in July 2022.

Big Finish listeners can save even more money by purchasing volumes one and two together in a bundle for just £38 on CD or £33 as a download.

To celebrate the announcement of this historic new series, Big Finish is also holding a flash sale on the Arthur Darvill back catalogue. For a limited time, the following releases are available up to 50% off when bought directly from the Big Finish website: 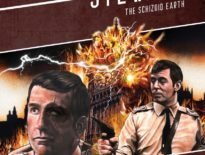