COVID-19 has claimed another victim in the 2020 entertainment and cultural schedules, as the debut of Steven Moffat’s new play has been delayed until next year.

The Unfriend is a satire on the middle class compulsion to always try to be nice. A married couple (Peter and Debbie) get back from a cruise to find an unexpected – and unwelcome – visitor waiting for them. The couple will be played by Reece Shearsmith (Series 9’s Sleep No More) and Amanda Abbington (Sherlock) with Frances Barber (Series 6’s Madame Kovarian) as Elsa Jean Krakowski, their erstwhile shipmate. The play is being directed by Moffat’s long-time collaborator, and Shearsmith’s fellow Gentleman, Mark Gatiss.

According to Moffat, he got the idea from friends who had a similar experience of exchanging email addresses with someone while on holiday only to have them make good on their threat to ‘keep in touch’:

‘Jesus, they’re coming to stay!’ They soon find out stuff they’d rather not know. I said: ‘Can I have that? Can I take that story and reorganise it so that it goes even more badly than it did in real life?’

The Unfriend, to be performed at the Chichester Festival Theatre, had been announced as part of Chichester’s 2020 season, which would also have included five world premieres, five revivals, and two musicals. Unfortunately, the Theatre has now announced that all productions for the rest of the year are cancelled. As Moffat later tweeted,

Sorry to those of you who booked, but that’s The Unfriend delayed till next year – we’ll put an extra joke in it to make it worth the wait.

Did you manage to get tickets? Or are you keeping your fingers crossed for cancellations? 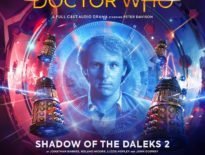