Britbox, the streaming repository of all things British, cult, and difficult to find on DVD will be adding the two Peter Cushing Dalek films. 1965’s Doctor Who and the Daleks and 1966’s Daleks – Invasion: Earth 2150AD will arrive on the service today (10th September 2020).

The films were produced during Dalekmania – like Beatlemania, but more plungers. In the infamous first film, Dr. Who is played by Peter Cushing who creates Tardis in his back-garden. He takes his grandaughters Susan and Barbara (and her boyfriend Ian) on an intergalactic adventure to another planet.

There are elements of the original show, which was still very much in its early years when the film were released, but there are many changes. The films are even more odd considering the build up of lore that happened after the 1960s.

Other classics are coming to Britbox this month. TV shows Blake’s 7 and Survivors, both by Dalek creator Terry Nation, will be added, along with films like One Million Years BC and The Man Who Fell to Earth, starring David Bowie.

Dalek props from the Cushing films were used by the BBC in the TV story The Chase. You can currently order some exclusive Dalek figures based on pepperpots seen in both stories.

Britbox also has the entirity of Classic Doctor Who to watch at your convenience. Has anyone been using Britbox? Will you been logging on to watch the Cushing films? 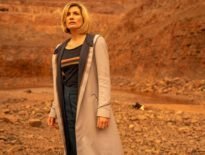 News Doctor Who Series 13 Begins Filming “in the … 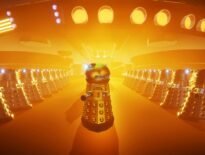