The latest edition of Doctor Who Magazine includes an exclusive preview of the new animated series, Daleks!, part of the Time Lord Victorious event. As the first official Doctor Who animated spin-off series, it’s pretty big news, so it’ll be fascinating to learn more about the behind-the-scenes.

The magazine includes interviews with the cast and crew members, plus screenshots of the series. 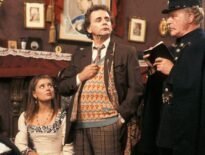