The Doctor and Peri have been an on-and-off combination for 36 years now, and we have a Big Finish boxset dedicated to this relationship in the form of The Sixth Doctor and Peri Volume 1. Within this special release of four stories, we’re told that the two characters had actually been travelling with one another for a period of 12 Earth years, albeit with stoppages for Peri becoming a warrior queen and being consumed by a mind parasite, which as a full-time member of the TARDIS crew is actually a very long time for such a lifestyle. And legend has it that neither Colin Baker or Nicola Bryant have aged a day.

These two have been tried and tested in every way, from the very end of the Fifth Doctor’s life and the start of the Sixth Doctor’s tenure, bar one very obvious situation: couple therapy. Conflict Theory, the final story in this boxset, is dedicated to just that and is likely what has attracted many buyers to this release. And we’ll get around to that. But before you see a relationship at breaking point, you need to know what leads up to that.

In The Headless Ones, written by James Parsons and Andrew Stirling-Brown, Doctor Who does Joseph Conrad’s Heart of Darkness by sending the Doctor and Peri deep into the Congo with a group of Victorian explorers.

This story starts with a slightly confusing TARDIS scene that is supposed to explain why the titular characters of the boxset end up in the Congo, and quickly splits into an alternating format of full-cast drama and diary readings from a Victorian adventuress who is also present.

The initial pacing feels like a classic Sixth Doctor story from Big Finish, and on a lengthy journey through the jungle that would make sense, but the hour-long format is actually used in this boxset. That means the Doctor, who is of course wearing his vibrant coat in a humid jungle, gets hot very quickly.

A lost tribe of people with faces on their chests is the target of these explorers, but the group have a variety of motivations – which stay hidden for a lengthy period when you consider how many time jumps are needed to fit a journey deep into the Congo into a single hour.

Besides a local tribe (not the one being searched for) speaking perfect English, the group of characters seem pretty believable and it certainly feels like it is set in the same universe as most Big Finish release to feature Queen Victoria herself. In fact, this story seems to masquerade as being about colonial interests and the mystique of unexplored Africa (and the literature that spread those ideas in the past), when it’s really focusing on gender relations in different types of societies.

The ending does make the most of its colonial-era setting though, and sends the same grisly punches as Heart of Darkness does at its most brutal points.

From Victorian-era violence, we head to 21st Century violence in Jacqueline Rayner’s Like, although once again there’s a disguise in use as this time the setting is actually a far-future planet where everyone is chipped as a compulsory measure so they can essentially have their life plugged directly into the equivalents of Instagram, TikTok, Twitter, YouTube, and whatever other social media platforms you care to think of.

Pretty quickly this works in a certain companion’s favour, as her name happens to sound just like ‘Peri’, she looks very good for an aging woman (not my words), and she bags some brand deals as a sci-fi equivalent of an influencer. Meanwhile the Doctor is dismayed to find out he doesn’t have enough subscribers to face the authorities. Yup, subscribe to the Doctor to bring about the revolution.

But here comes the twist in this society: dislikes bring physical discomfort and anyone going against the system will be clearly given the ‘downwards thumb’ by other users. The Doctor gets zapped, while Peri appears in a sitcom-like ad campaign with a cheery alien.

Like anyone after a fair amount of time on social media, everyone – including the authorities – spends this story making decisions based on what will get them likes. The villainous governor of the planet (Big Finish always does a good job of making governors very flawed and unlikeable individuals) would never act in an unpopular way, as she’d probably be killed by dislikes before she’s voted out.

For all of social media’s flaws, and the power of an interest-driven media rather than one that informs and educates, this story uses the platforms’ advantages to resolve a lot of problems, including stopping people kicking down others because they feel hurt themselves. Oh, how we can learn.

This still works as a well-paced story, despite being a dramatised commentary on social media culture, and reiterates the power of societal relations and how anyone can become a slave to public opinion.

After chasing likes, where to next? The Vanity Trap is another very 21st Century issue viewed through a different time period, and unlike episode two, this features a pre-titles sequence, which is a great introduction to the setting, characters, and central dilemma. Stuart Manning’s story feels more reminiscent of more modern eras of the show with its use of time travel, but in a way that feels like this is what the Sixth Doctor and Peri era could have looked like, had it been made with 2005 techniques.

Myrna Kendal is a cliched 1950s movie star who won’t let go of the peak of her career, and allows her ego (among other things) to damage the world around her. It’s now the 1970s, and she is making her final film, but her first in England. So basically a B-movie.

Colin Baker, sounding younger than ever, is on top form here and being able to simultaneously portray the pompousness of early Sixie and the calmer Doctor of later years is a great mirror to the character development going on with Myrna Kendal.

The plot gets ever weirder the more Myrna tries to hold back time on her career – a comment on the distances people go today to look perfect – but her bond with the Doctor eventually heads to a conclusion that is a bit rushed but leads well into Conflict Theory.

Anyone who has studied sociology will either find the final episode an absolute hoot or an infuriating reminder that many theories don’t actually work in practice. Conflict therapy has five resolution strategies: avoiding, accommodating, compromising, competing, and collaborating, and it’s up to you to decide which route the Doctor and Peri take as they visit a intergalactic therapists manned by robots that resemble famous psychoanalyst Sigmund Freud inside and out. Which as a comedic idea actually serves the plot for its entirety very well.

The Doctor and Peri are split up for their one-hour allotted session of therapy, and like any appointment with a specialist you have to travel back in time to share your woes to resolve what you should do in the present. The Doctor’s include being oblivious to the events of a Virgin Missing Adventures novel and guilt over his granddaughter Susan, while Peri gets consumed by a black suffocating cloud of – no wait, she literally gets consumed by a black suffocating cloud. The commentary can be very on the nose in this boxset.

Nev Fountain, who has a record of writing some brilliant stories involving Peri, delivers again; he does a great Freudian analysis on the relationship between the Doctor and his companions, and the subsequent guilt complex. Often, as in the case of an Ice Warrior and Venus who sought therapy once, it can just come down to him being from Mars and her from… well, you can guess.

The Doctor’s description of Peri as mentally insane fuels the Freud robots’ desire to prove their theories correct (they also have a fear of prosecution), and, inevitably, theory is proven to now always work in practice, especially when your villain of the week also has mental health problems. Stopping said enemy requires surviving couple therapy first as both the Doctor and Peri having their egos exposed to who they really are.

When the Doctor looks in the mirror, he only sees his audacious coat, while the Freudian robots see so much more…

Given there are less and less new Peri stories being produced by Big Finish now, this boxset is worth purchasing if you’re a huge fan of the student botanist. But the stakes never really feel high for Peri in any of the four stories, and while she’s given enough plot to make the lead-in to Conflict Theory seem worthwhile, especially with the relationships she builds in The Headless Ones, there isn’t much high-scale peril for Peri.

The Sixth Doctor and Peri Volume 1 is available now from Big Finish. 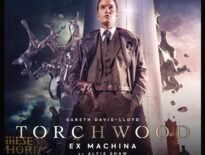 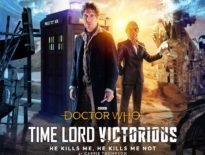