After more than 20 years, Big Finish’s Doctor Who Main Range will be coming to an end in March 2021, with the 275th release, The End of the Beginning. The cover shows the Fifth, Sixth, Seventh, and Eighth Doctors, drawing parallels with the first release, back in 1999, The Sirens of Time.

The Main Range has been a monthly series typically starring Peter Davison’s, Colin Baker’s, Sylvester McCoy’s, and Paul McGann’s incarnations of the Doctor. Now, these are coming to an end, to be replaced by boxsets for the respective Doctors and companions, seemingly trialed with The Sixth Doctor and Peri box.

Here’s the blurb for The End of the Beginning:

It still seems a huge shame that they’re concluding this series, giving it’s been a staple of Big Finish for so long – the go-to for any fans who want to revisit Classic Doctor Who. Still, at least it sounds like they’re ending not with a whimper but with a bang.

The End of the Beginning, written by Robert Valentine, is available to pre-order now, and is released in March 2021. 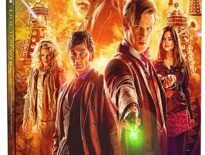