Thinking through all of the Eighth Doctor’s adventures in the audio and visual mediums, the latest War Master boxset from Big Finish, Hearts of Darkness, is perhaps the closest we have to a full-on movie on the scale of this Doctor’s inaugural outing.

Four episodes are delivered over four CDs, but each really feel like an act (or at least a blend of three acts over the four CDs) in a large-scale science-fiction movie which takes inspiration from the founding movies in the genre as well as classics such as Star Wars and the plethora of genre movies that appeared in the 1990s. The soundtrack firmly places this boxset too in a decade where the presence of cinema (or even the straight-to-TV movie) was possibly at its largest in American and British culture.

Yes we’ve had numerous multi-boxset tales spun from the Eighth Doctor era by Big Finish, and with expansive core casts with cult followings, but the removal of that continuity-laden structure makes this release feel the most fitting to be a cinematic follow-up.

Surely all great Eighth Doctor movies require the presence of the Master as an opposite, and given this boxset actually exists in the Master’s own range, it’s no surprise that we get excellent action from both.

It all begins with the War Master, so brilliantly and cruelly played by Sir Derek Jacobi, being asked by the Time Lords to go on a mission to find the Doctor. This is where the title inspiration comes from, as this pulls from Joseph Conrad’s novel Heart of Darkness where seaman Charles Marlow is sent deep into Africa to track down, and possibly dispose of, a deranged ivory trader called Kurtz who has established himself as a leader of the locals. It takes a while, but this boxset returns to that idea and goes in heavy – although so soon after the release of Sixth Doctor adventure The Headless Ones, set in the era of Conrad’s novel, does make its moral questions a little familiar.

We are thrown into the War Master boxset with the man himself, and this on-the-ground style isn’t just brilliantly theatrical but is also one of many reminders that Jacobi can not only play a character in 100 different ways, but he can play the Master in any way required too.

The core cast of side-characters is introduced early on, and they’re all top casting calls that feed even more into this Star Wars-like feel of the opening episode, especially with the way each is brought into play. The highlight of this core team is Colin McFarlane as the American-accented Captain Morski, and the most disposable is Sam Hallion’s Kriket. And if you don’t like this motley crew, then don’t stress. Once you get in mind that this is an audio movie, then you can see where their character development, and fates, lie.

Morski knows more than he ever lets on, or he’s just playing a convincing bluff, and that leads into a brilliant cliffhanger at the end of the first episode. Where that picks up is a reminder of who the Master really is, when trying to convince a group of rogues to fly him across space to find another of his kind.

This cliffhanger is really the crux of the next two acts, although a load of super-villainy is filled into the final one, and in episode two we are introduced to Dorada (Sandra Huggett) and The Scaramancer (Luyanda Unati Lewis-Nyawo), who is not to be confused with The Sonomancer from the Eighth Doctor’s Doom Coalition sets.

Dorada is introduced as a gun-for-hire (highlighting the point that this is a bit Star Wars-y), and she gets a decent amount of development without ever being truly explored as a character. The Scaramancer, too, is someone we get to know but perhaps without knowing who she really is. This comes off as a deliberate choice and for a very, very good reason which leads into another helluva cliffhanger that introduces the split final act.

That final act does not get off to the strongest start, but then regardless of the gap you leave between listening to episodes two and three, you will still be thinking through that cliffhanger. The episode gets more immersive as it goes along, heading into more classic sci-fi territory (partly inspired by Mary Shelley), and this is where Paul McGann is properly introduced to the story. From the off, you can tell he is absolutely loving the material he has been given by writer David Llewellyn. A personal highlight: a word on horse rights.

There’s a very long set-up before the face-off we’ve all been waiting for, and then there’s not much I can say beyond that in a spoiler-free review. The final episode really feels like the final act of a blockbuster with a classic hero versus supervillian narrative: it picks up on a very old Big Finish continuity reference from episode one that flew completely under my radar, gives delicious dialogue for Jacobi and McGann to play with, packs in some emotionally impactful body horror, and returns to the inspiration provided by the Hearts of Darkness boxset title.

It’s easy to forget that, as this is a War Master tale, it is set during the Time War, because the drama is so immersive and works so effectively as a one-off. The original Doctor Who TV Movie was designed to be a jumping-on point, and really this feels like a sequel of sorts. As long as you’ve encountered the Eighth Doctor in video or audio before, and have also witnessed Jacobi’s incarnation of the Master (a quick YouTube search can solve that if you haven’t), then you have enough to dive into this story and thoroughly enjoy it.

But if you are interested in the continuity, then this fits in very well with Big Finish’s ‘Time War’ output, leaves enough questions and introduces enough new ideas and characters to merit a return in the future, and ends on one brilliant scene that Big Finish has to follow up on…

The War Master: Hearts of Darkness is available now from Big Finish. 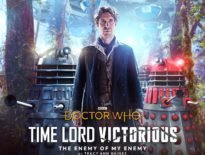