During the heart of the Third Doctor era, Roger Delgado’s Master was everywhere. He made so many appearances through Seasons 8, 9, and 10, that Delgado had to seriously consider stepping away from the show. Other producers just assumed he was always unavailable because of Doctor Who and it probably cost the actor some work. So there was a tentative plan in the works for a big confrontation that would have spelled the end of the Master and regeneration for Jon Pertwee’s Doctor.

Of course the tragic death of Delgado, a car crash in Turkey, changed everything. Most of all, there was no official exit for the renegade Time Lord. But here’s where we come to the notion of doors opening and closing.

If Season 11 ended with a huge, climactic battle between the Doctor and the Master, it’s easy to believe it would have been quite the event, with intense planning and execution between Barry Letts, Terrance Dicks, and possibly even Robert Holmes. Such a send off would likely have ended the Master’s story for good, depending on how it played out (it was apparently to be revealed that he was either the dark side of the Doctor, or his brother). It’s possible that no other later producer might go near the character again, in deference to Letts, Dicks, and Delgado.

But that didn’t happen and the Master’s fate was unknown. (Door wide open.) Until The Deadly Assassin, where we found a desiccated corpse taking up the mantle. So it continued until the end of the Tom Baker era, where we got the Anthony Ainley version.

But throughout the ’80s, we saw this version cheat death a few times. We saw him in some nasty situations that could very well lead to death, but we never seemed to stick around to see if it stuck. That door was kept open. And it seemed as if the Master — just — couldn’t — die. But that’s true with many villains. Many is the time in comics when we thought the Joker or Doctor Doom had breathed their last but again, we’re left with a question mark and no body. Unless of course you have access to spares and obviously the Master does.

That door being held open permanently (via a Gallifreyan wedge) allowed Russell T Davies to bring back a nuttier than usual incarnation (John Simm) in the new era’s Series 3. Opinion’s on the crazy eater of turkey were divided, but by Series 8, there was Missy, (Michelle Gomez) allegedly, the first female form for the Master (who really knows what we missed?).

Here’s where things get interesting. Each incarnation of the Master has his or her own ideas about evil. Peter Capaldi’s Twelfth Doctor really went the extra mile in Series 10 trying to rehabilitate Missy. He saw something in her, and maybe he just wanted his best friend back. It was an extraordinary and sometimes misguided use of his time, but even after all it ultimately cost him, in the end, it worked.

Whether it was the Doctor’s influence, or just witnessing how loathsome her former round-faced incarnation was, at the end, she stepped onto the side of the angels, only to be brutally murdered by her former self. Hit with such a calculated, devastating blast, her ability to regenerate was destroyed. This was Steven Moffat, who knows the rules, and who proclaimed this Time Lady dead. Really, a bold move, attempting to cut off access to the Master for future showrunners. Was this a challenge to Chris Chibnall?

But by all accounts, it seemed at the time that this was a fairly substantial closing of the door on the character of the Master. Until Chibnall kicked it back open, with an even crazier version of the Master (Sacha Dhawan).

It’s at this point that the questions flood back. First, what’s with all the crazy? Eric Roberts portrayal in the 1996 TV Movie seemed toned down and respectable compared to the new era versions, especially Simm and Dhawan.

Second, in the grand order of which incarnations came before which, is the Dhawan version possibly an earlier incarnation?

Third, is there something we haven’t yet been told by Chibnall? If Dhawan’s version did indeed regenerate from Gomez, when it was thought to be impossible to do so, then maybe there’s a reason the character cannot die. Almost as if he’s actually immortal.

Yes, this would once again lead me to believe that it’s actually the Master who’s really the Timeless Child, and not the Doctor. It would explain a lot. The constant cheating of death, it certainly explains the raving lunatic he usually is these days. If you are literally billions of years old and can never ever ever actually die… that is eventually going to affect your psyche.

And it being the Master’s 50th anniversary, and it being all about him, maybe it’s all part of Chibnall’s planned celebration for later this year.

I suppose we’ll see. What say you? 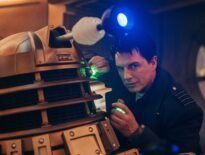 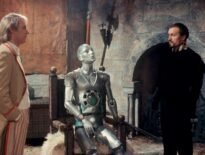