Following a public vote, BBC Books will be releasing two hardback books collecting The Essential Terrance Dicks – reprinting 10 of his best Target novelisations, including the much sought-after Doctor Who and the Wheel in Space.

Volume One contains, complete and unabridged:

The pair will have the Target logo spread across their spines, so they sit beautifully together on your bookshelf.

The first five Doctors are represented across the volumes.

The original Doctor Who and the Wheel in Space is particularly rare as its relatively limited print run was further hampered by a fire at the factory copies were stored at. It’s probably the least-read Target novel, so its inclusion is certainly welcome! 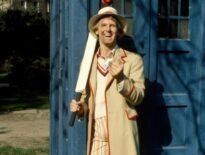