You can now pre-order a very special Lethbridge-Stewart book — The Ever-Running, written by Richard Brewer, raising money for the Brain Tumour Charity.

This book is very different to the ongoing Lethbridge-Stewart series and the anthology books, The HAVOC Files. The Ever-Running is a collection of short stories with an arc, taking the Brig into situations and locations that he has never encountered before.

It’s perfect for Doctor Who fans, especially those who love The Daemons or The Android Invasion.

Brewer originally wrote a short tale, Shadows in the Glen for the first Lethbridge-Stewart Short Story Collection, then kept in touch with Candy Jar’s Head of Publishing, Shaun Russell, with the pair discussing Richard working on a full book.

The Ever-Running sees the Brig facing a new enemy, one who has the ability to manipulate his timeline. Richard explains:

“I wanted to take the Brigadier to places that he has never been before. It was tremendous fun to drop him into unknown territory!”

But then Richard received some terrible news. He continues:

“I started writing The Ever-Running during a particularly difficult time. My wife was diagnosed with a brain tumour at the beginning of last year. At first, she and I shared a deep sense of powerlessness and frustration at the news. But after the initial shock, and following some investigation into the current state of research into brain tumour treatment, we both knew that we desperately wanted to raise some money. I approached Shaun about writing a selection of short stories to raise funds for this urgent cause and he readily agreed.”

Every year, some 16,000 people are diagnosed with a brain tumour, a disease which is responsible for more deaths of children and adults under the age of 40 than any other cancer. Sadly, despite this startling fact, the funding into research is very low, as is evidenced by the fact that the prognoses for brain tumours have not changed in forty years. However, helping lead the fight against this devastating and indiscriminate disease is the Brain Tumour Charity.

Coincidentally Shaun found himself working on The Ever-Running under similar circumstances. Sadly, his daughter was knocked down by a car, fracturing her lower back and pelvis on both sides leaving her unable to walk. Shaun says:

“COVID restrictions meant that I had to stay with her as she recuperated in hospital, so as she was sleeping (or playing on her Nintendo Switch) I edited Richard’s book, and I am so grateful that I was able to do this during the obvious worrying times I was facing. As a cancer survivor, I wholeheartedly support this book and encourage all readers to support Richard, either by buying this book, or donating to the Brain Tumour Charity (www.thebraintumourcharity.org).”

I’ve also been lucky enough to read The Ever-Running, having been a small part of the editorial team, so can wholeheartedly recommend it. The prologue feels like a mix of Dragonfire, Star Wars, and The War of the Worlds, and we go from there to be immersed in an exciting journey throughout the Brigadier’s timeline — and beyond!

Brigadier Alistair Lethbridge-Stewart, the stoic and ever dependable defender of Earth, is about to discover that reality is under attack from an enemy that strikes from beyond the boundaries of space and time. The Ever-Running have vowed that they must never be caught, and to prevent capture they are willing to destroy all that Alistair has sworn to protect.

Explore six new adventures throughout Alistair’s life and beyond, including a desperate battle for survival on a distant ice planet, General Lethbridge-Stewart facing the outbreak of World War 3 in the 1980s, a young girl escaping a remote Hampshire village where the sick never return from an idyllic island, and three further adventures that take the Brigadier to the far future, and a realm beyond the universe itself.

The Ever-Running is written by Richard Brewer, the author of the short story File# 161229 and Shadows in the Glen. Profits from this book will be donated to the Brain Tumour Charity.

The Ever-Running is available to pre-order from Candy Jar, and will be released in early July 2021. It’s not part of any subscription offers because it’s purely for charity. 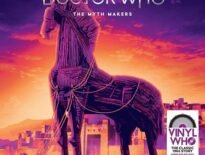 Merchandise Coming Soon: The Myth Makers Gets the Vinyl Who Tr… 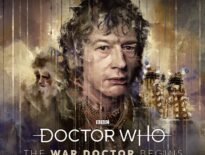