You Are The New Showrunner: How Would YOU Change Doctor Who? “‘Tis nature’s law to change”, as John Wilmot, 2nd Earl of Rochester, wisely said. Writing in the 17th Century, he (probably) wasn’t talking about Doctor Who but change is, of course, the one constant in the programme. Eventually, everyone who works on the show will move on: actors, writers, technicians, showrunners…

And so the wheel has turned and both Jodie Whittaker and Chris Chibnall will be leaving Doctor Who in 2022.

But today, it’s all about you. What would you do if, unlikely as it may sound, the BBC chose to put you in charge of your favourite show?

Previous changes of leadership in the Doctor Who production team have led to significant new directions being pursued in the tone and style of the programme. Think of Jon Pertwee’s debut in Spearhead from Space, which, along with colour filming being used for the first time, established the show’s new, Earth-bound setting and slicker feel reminiscent of the classic ITC shows of the previous decade, once Barry Letts’ and Terrance Dicks’ influence was felt.

Philip Hinchcliffe took over as producer with a clear plan to take the Doctor away from UNIT and back into space. The stories he and script editor Robert Holmes oversaw, influenced in many cases by literary and cinematic classics, have endured as some of the very best in the programme’s long life.

Later still, John Nathan-Turner’s era burst into life with a new title sequence, a new colour palette for the Doctor’s costume, and an emphasis on more serious storytelling, ditching the comic whimsy of the Williams/Adams period.

Steven Moffat spoke of the need for such a long-running programme to constantly re-invent itself too and oversaw not one but two significant changes of tone and style. Matt Smith’s debut in The Eleventh Hour heralded what some have described as a ‘fairy tale’ feel for the next few years, with the mysteries of the Girl Who Waited and later the Impossible Girl (not to mention River Song) serving as enduring arcs which would span multiple seasons.

Just when he felt things were getting a little too cosy, he went and shook things up again, delivering a new acerbic incarnation of the Doctor who would no more eat fish fingers and custard than he’d wear question marks on his jumper.

And then Chris Chibnall came on board, at first abandoning darker narratives and ongoing arcs, then, in his second season, taking a deep-dive into the show’s mythos.

So what do you think? How would Doctor Who be different if it were your name on the credits? New writers? New monsters? Old monsters? More multi-episode stories? Series-spanning arcs? Bring back the Ergon? Give us your views below! Be as bold as you like — but remember, this is about you and the future, not any perceived mistakes of the past…

You Are The New Showrunner: How Would YOU Change Doctor Who?

Features Chris Chibnall: The Man, The Job, The Passion? 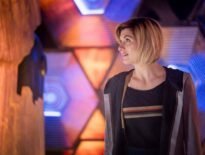