Will Christopher Eccleston return to Doctor Who for its 60th anniversary in 2023? Don’t get your hopes up.

Asked during a Q&A at the Dragon Con whether he’d return to the show, Eccleston said it was “very doubtful.” He went on:

“My relationship with the BBC over Doctor Who has not healed. I left because my relationship with [showrunner] Russell T Davies, [and producers] Julie Gardner and Phil Collinson completely broke down during the shooting of the first series… The shooting of the first series was a nightmare. I agreed with Russell that I would go, quietly and respectfully, and I would look after the show publicity-wise, in terms of publicising it.”

Though it’s undeniably sad, it’s also understandable, given what Eccleston went on to say about why he left Doctor Who:

“And then, without saying anything to me, they announced that I was leaving. They didn’t tell me they were going to do that. I was walking down the street and suddenly I got quite a lot of aggression… They created a quote, and they attributed it to me, which said I was tired.

“When they said that, any other producer reading that would go, ‘Oh, we’re not going to employ Christopher Eccleston because he gets tired’. So it was a lie, and it was in quotation marks, and I’m from Salford, you don’t do that to me. So they issued a kind of apology, but it’s not enough, so no.”

Needless to say, it’s absolutely shocking behavior, making up a quote, especially in such an important press release.

Similarly, you can see why Eccleston felt he’d been blacklisted by the BBC.

Fortunately, we can still enjoy new stories from the Ninth Doctor, thanks to Big Finish. In our exclusive interview, he reflected:

Might Eccleston be tempted to return to Doctor Who on TV eventually? Well, despite what he said here, we remain hopeful. He at least checked the script for the 50th anniversary, having heard Steven Moffat would be in charge. 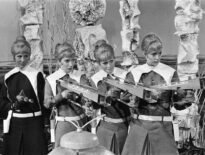 News New Galaxy 4 Animation to be Screened at BFI South… 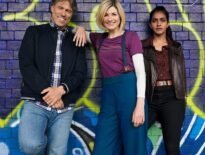