If we go by educated guesses, William Shakespeare was born on 23rd April 1564 (although the first record of the greatest writer in English history was at his baptism on 26th). He died on his 52nd birthday, 400 years ago today. And in 1599, he met a strange man called the Doctor and his companion, Martha Jones, all the way from Freedonia.

Written by Gareth Roberts, 2007’s The Shakespeare Code was Martha’s first foray into the past and was one of the most expensive productions due to its sets and costumes. They did film in London’s Globe Theatre, but much of the stunning surroundings were found in Coventry and Warwick.

It was Roberts’ first work on the TV show, though he’d previously written Doctor Who novels throughout the 1990s and 2000s. He obviously has a fascination with Shakespeare as he previously wrote a 2005 comic for Doctor Who Magazine, A Groatsworth of Wit, starring the Bard. Quite right too…

Shakespeare and the Doctors Many Doctor Who stars have appeared in adaptations of Shakespeare’s work. Though his idol was Charlie Chaplin, one of William Hartnell’s first roles was in April 1926’s The Merchant of Venice at the King’s Theatre, Hammersmith. The First Doctor actor followed this with brief walk-on appearances in Hamlet, Macbeth, and The Tempest, according to Jessica Carney’s biography, Who’s There? The Life and Career of William Hartnell.

But it’s the Troughton family who actively embraced the work of Shakespeare; Second Doctor, Patrick Troughton appeared in the 1948 Laurence Olivier film of Hamlet – as Player King, the lead in the “play within a play” – and again with Olivier in Richard III (1955) as James Tyrrell. His son, David (The Curse of Peladon; Midnight) is a noted member of the Royal Shakespeare Company (RSC), including playing the titular role in Richard III, whilst Sam Troughton, Patrick’s grandson, was nominated for the Ian Charleson Award 2001 for outstanding performance by a young actor when he played Young Talbot in Henry VI.

David Tennant most famously played Hamlet during his time as the Tenth Doctor (Ninth Doctor, Christopher Eccleston, also took on that part in 2002), and since then starred in Richard II, and as Bendick in Much Ado About Nothing opposite Catherine Tate.

Such dark roles – so it’s up to Seventh Doctor, Sylvester McCoy, to make things lighter, appearing as The Fool in King Lear (2007) with the Great Intelligence, Sir Ian McKellan, as well as Puck in A Midsummer Night’s Dream, and Feste in Twelfth Night!

And finally, Twelfth Doctor, Peter Capaldi, starred in a 1983 production of Twelfth Night. But there’s one play none of them will star in…

Whatever Happened to Love’s Labour’s Won? The Shakespeare Code revolves around the ‘lost play,’ supposedly a sequel to Love’s Labour’s Lost. Doctor Who wonders whether it was destroyed after an alien invasion (unlikely, I guess), but what actually happened is a mystery.

It was first mentioned in a list of Shakespeare’s works in Francis Meres’ Palladis Tamia, Wits Treasury, a 1598 book which is the first critical account of Shakespeare’s early plays and poems. It lists six tragedies and six comedies:

As it neglects to mention The Taming of the Shrew, many believe it to be its alternative title in much the way What You Will is for Twelfth Night. However, Meres also omitted the Henry VI trilogy, believed written by 1591. Furthermore, The Taming of the Shrew and Love’s Labour’s Won were listed separately in a 1603 book by Exeter bookseller Christopher Hunt.

Both Hunt and Meres missed out Much Ado About Nothing, though, generally thought written in 1598 – so could the ‘lost play’ actually be an alternative title for that production? The RSC seems to think so: they listed the October 2014- March 2015 run as “Love’s Labour’s Won (Also Known As Much Ado About Nothing)”! RSC artistic director, Gregory Doran, said:

“It’s always struck me that these plays belong together and so strong is my sense that I am sticking my neck out to say that Much Ado About Nothing may also have been known as Love’s Labour’s Won in Shakespeare’s lifetime. We know he wrote a play under this name and scholars have debated whether it is indeed a ‘lost work’ or an alternative title to an existing play. To test my theory, Christopher Luscombe will direct both with a single company of actors.”

The more romantic – and yet tragic (so fitting for Shakespeare) – theory is that Love’s Labour’s Won is, indeed, a lost work, detailing what happens to the King of Navarre, Berowne, Dumain and Longaville after their weddings were strangely delayed at the end of Love’s Labour’s Lost. You’d think Shakespeare would be master of the stage – but the real guy in charge was the Master of Revels, a man who oversaw everything. And if Shakespeare, or indeed any playwright, wished for the Queen to turn up to one of their plays, the Master of Revels was the person to impress. He’d write out any scandalous parts and if it weren’t to his suiting, he could make sure the work was never performed.

It seems unlikely Shakespeare made any offense obvious, though censorship certainly did happen. He nearly got into hot water over Henry IV Part 1’s Sir John Oldcastle, but in 1590, parts of Henry VIII were marked with the warning, “Leave this in at your peril!” Measure for Measure particularly offended and was completely blotted out of a 1632 folio of the Bard’s work in Spain.

Whether Love’s Labour’s Won is a lost play because the Master of Revels dismissed it or not is unknown – but in The Shakespeare Code, he’s drowned by an imbalance of the humours… or killed by witches.

Witchcraft is a subject Shakespeare was fascinated with, probably highlighted by the persecution of those supposedly dealing with the dark arts in Elizabethan England. Most notably, the Three Witches shape events considerably in Macbeth, predicting the titular character’s rise and demise when “Great Birnam Wood to high Dunsinane Hill shall come against him.” Lady Macbeth might also deal in magic, though – spoilers! – she meets a grim fate, as did many suspected of witchcraft in Shakespearian times.

The Witchcraft Act of 1562 was passed early in Elizabeth I’s reign, and anyone who should “practise, or exercise any Witchcraft, Enchantment, Charm, or Sorcery, whereby any person shall happen to be killed or destroyed” was to be killed too. Lesser offences (merely being suspected) meant life imprisonment.

He may be the bane of many-a-student, but Shakespeare has furthered the English language so much. While Shakespeare seemingly borrows the word Sycorax from the Doctor, there are plenty of words and phrases coined by the writer. Without him, the Daleks wouldn’t be the Doctor’s arch-villain, the prefix added in Timon of Athens. Full Circle would have to be called The Planet That Slept, its true title having first appeared in King Lear.

Revelation of the Daleks’ Tranquil Repose might’ve simply been Repose if it weren’t for Othello; Sleep No More would lack its Macbeth quote; and the assassination of J.F. Kennedy the day before Doctor Who made its debut would’ve been the murder of JFK by an assassin. Perhaps we wouldn’t have 2010’s Flesh and Stone either if “own flesh and blood” hadn’t been coined in Hamlet. And the Empress of the Racnoss (from 2006’s The Runaway Bride) would not have said “sick at heart” if it too hadn’t appeared in Hamlet.

Shakespeare also gave science fiction some great phrases, including “once more into the breach” (Henry V) and “brave new world” (The Tempest). A Midsummer Night’s Dream gave us a great little phrase I’m sure various aliens over Doctor Who’s 50-odd year history would like: “What fools these mortals be.”

Some of us, perhaps – but not Shakespeare. 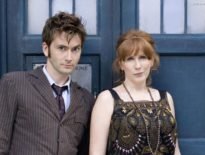