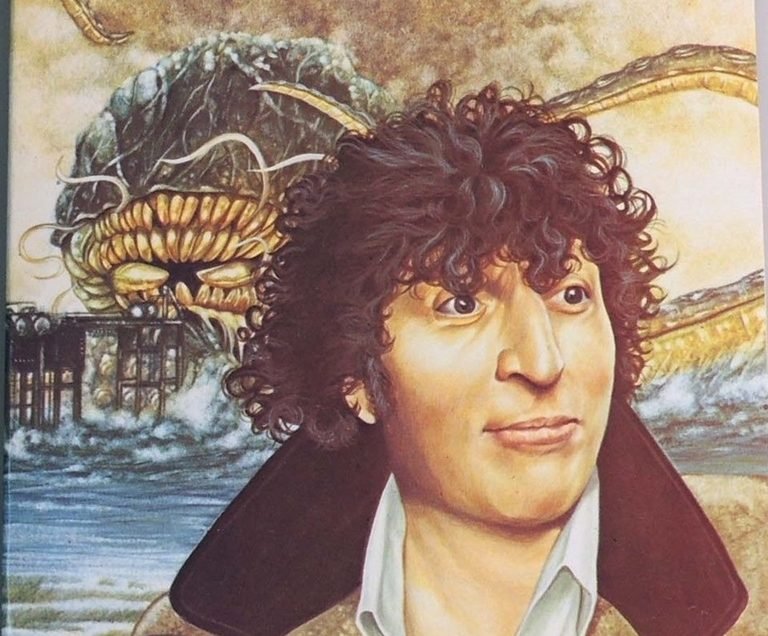 Let me make this clear, I absolutely adore Target Books Doctor Who novelisations, and not just the brilliant, sharp and succinct prose but also the (predominantly) stunning sleeve artwork. The best covers are rightly being celebrated at The Cartoon Museum in an exhibition, Doctor Who: The Target Book Artwork (28 April – 11 May). But what about the covers that didn’t quite hit the mark, didn’t capture (or enhance) the exciting story within? The ones showing farting monsters, welding warehouses, and the world in orange? So here’s my bottom ten: I don’t know much about art but I know what I don’t like…

1. Image of the Fendahl One of my favourite Target covers of all time is John Geary’s brilliant artwork for The War Games, it’s intriguing, exciting and evocative. But his Image of the Fendahl artwork looks like he left the pencil drawing on the kitchen table and came back later to find his 12-year-old son had coloured it in with luminous felt-tips.

‘But mummy said it was brilliant.’

‘Darling, you’ve made him cry now. Would it really hurt to send it in as it is…?’

‘You don’t want to sleep on the sofa again. Do you John?’

It also seems to depict a deleted scene where the Fendahl sneaks up behind and blows a raspberry at the Doctor, who looks rather perturbed, as he’s clearly had a skinfull the night before… blurgh.

2. The Power of Kroll 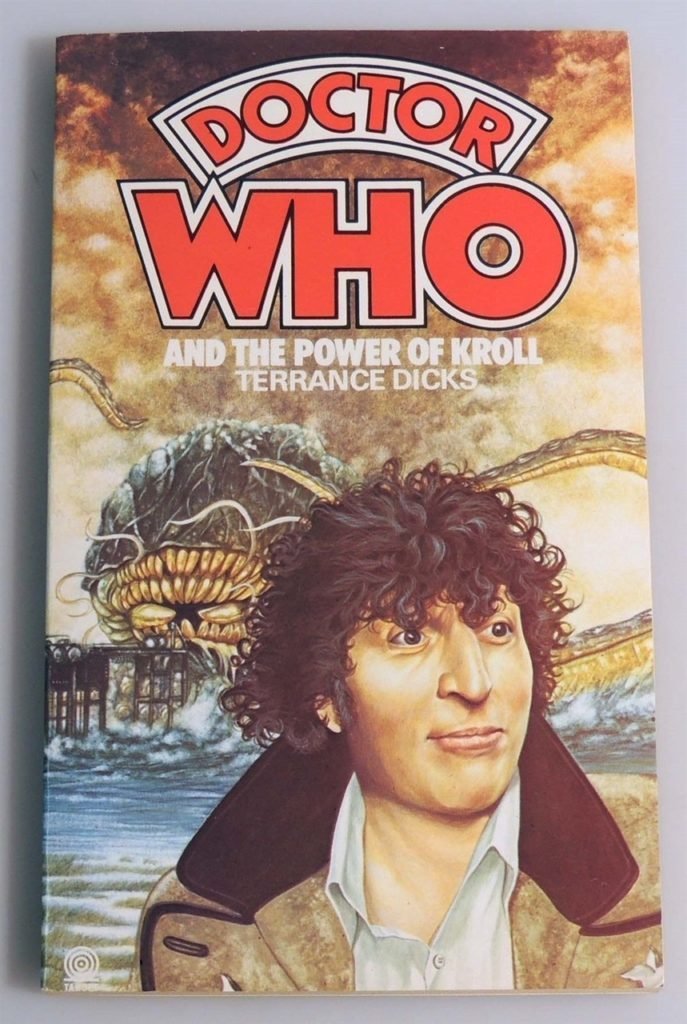 Andrew Skilleter was (and is) renowned for his stunning Doctor Who artwork, the highlight for me being his definitive portrait of Delgado’s master that graced the cover of Target’s The Mind of Evil. But Andrew clearly had an off day (and, to be fair, so did Robert Holmes, Philip Madoc, John Leeson et al) when it came to The Power of Kroll.

Russell T Davies has been unfairly derided for introducing farting to the Doctor Who universe. Not guilty! Because in the very title of this story – Kroll’s power – refers to the super-sized squid’s sphincter whistle. It’s the source of the methane gas emissions that refinery crew are so eager to, um, refine. And that’s clearly the inspiration for Skilleter’s cover: the Fourth Doctor stifling a giggle when he hears the colossal cephalopod’s cheek squeak. You can see the enormous gas cloud amassing behind the beast. You won’t be sniggering, Doc, when the wind changes direction…

This cover is also part of a strange phenomenon that happened in 1980. If you didn’t know what Doctor Who was about and only saw the Target covers for The Invasion of Time, The Power of Kroll, The Nightmare of Eden and The Horns of Nimon, you’d think it was the adventures of a curly haired bloke who wanders about blissfully unaware he’s being followed by space beasts.

3. The Keys of Marinus 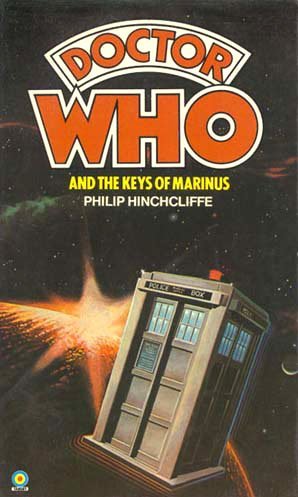 David McAllister is a fine illustrator, his cover for The Mind Robber is jaw-droppingly good. And there’s not much wrong with his illustration for The Keys of Marinus, apart from it being so generic it could be slapped on the front of virtually any Doctor Who book to make it look a little less exciting and enticing.

This was clearly a time when an editorial decision was taken not to depict Doctors other than the current one (Tom Baker) on the covers. Which kind of makes sense as it could be confusing, but not to include anything at all, other than the TARDIS (which, for some reason is grey…?) and a generic planet, is just weird.

Marinus may not be the greatest adventure, but it does have the spooky Voord, those brain creatures with eye on stalks in jars, and three knights frozen in blocks of ice… Maybe if you get an electron microscope you can see the people, towns and cities of Marinus all in wondrous detail on the illustration. Unfortunately, they didn’t supply them in John Menzies in 1980, so there was no way for your average 10-year-old to tell.

If you didn’t know Doctor Who and saw this cover, you might think it was about a quest – right so far – to find the door keys to unlock a police box that was inexplicably floating in space. And had somehow turned grey. 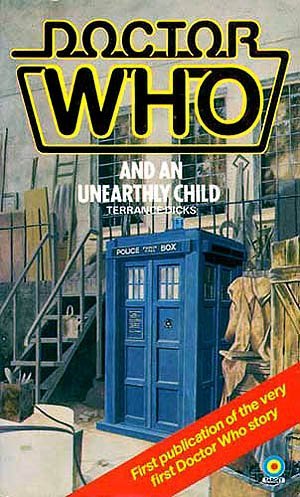 I remember, aged seven, seeing the cover of An Unearthly Child* in WHSmith and thinking, ‘Gosh, that’s a bit dull.’ Then noticing the extra cover blurb ‘First publication of the very first Doctor Who story’, which, again, is slightly underwhelming. So I put it back on the shelf, unpurchased.

It’s always an indication that the cover doesn’t quite sell the book when they start slapping on extra words to persuade you it’s special. And, rather than the creepy junkyard depicted on screen, it looks here like the TARDIS has landed in a welder’s warehouse: Doctor Who in an Exciting Adventure in a Warehouse (With Welders).

Now, if you are going to change the title from 100,000 BC (good job, because welding won’t be invented for another 101,885 years, when Nikolai N Benardos secured the first British patent, welding fans) to An Unearthly Child, one thing you might want to do is feature said child looking ‘unearthly’ on the cover. And if it’s the first publication of the very first Doctor Who story, how about depicting the first Doctor too? Oh weld… 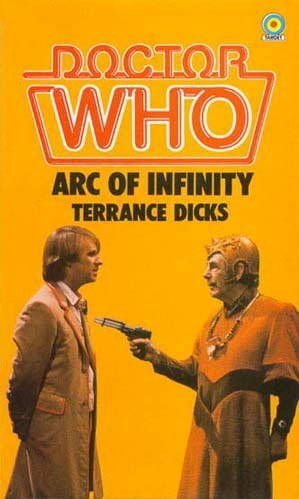 The future’s bright… the future’s garish if this photographic monstrosity is to be believed. I’m no graphic designer (I’m a barely competent writer) but pulling an orange logo on an orange background with orange tinted figures on the cover is maybe overdoing the orange a little. You could imagine the uncredited designer seeking dispensation to use an all-orange version of the Target logo in the quest to make the most orange object in the universe. Sorry, mate, that’s position’s already taken – by an orange.

Arc of Infinity’s cover is the worst offender in a fearsome series of sleeves whose very name ‘The Davison Photographic Target Covers’ strikes fear into the heart of every designer and would-be Doctor Who artist everywhere. Never has the phrase, ‘I’m not an artist, but I’m sure I could do better than that s**t’ been more accurately and universally applicable.

If the world was fair (and it isn’t, soz) then eight of this top 10 would be photographic Fifth Doctor sleeves. The decision to use photos was forced on the range because apparently Peter Davison was a bit picky about illustrations of himself. The decision to use really dull and unengaging images wasn’t.

What’s additionally infuriating is that Target had been producing exciting covers without the Doctor on them for ages. And then they worked out they could do it with Davison covers too, occasionally having the Fifth Doctor poking his head through the glowing neon logo – that’s got to scorch a little. Clearly Davison became more relaxed over the years, and allowed books to use illustrations of himself – lifting the ban just in time for Colin Baker to take over. Who didn’t like being illustrated either… doh!

Check back tomorrow where I’ll once again delve into the artistically challenged work of (off)Target artwork.

Off Target: Doctor Who and the… 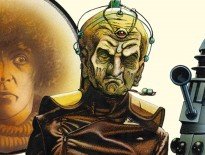 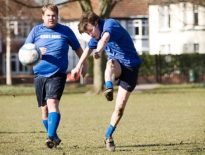 Features Who Are Ya! Football and The Doctor
28