Paying tribute to a former companion, Class, the upcoming Doctor Who spin-off, has dedicated a building in the brand new Coal Hill Academy to them. That’s right, not even fictional schools are safe from Tory meddling, the old comprehensive is now an academy.

Housed within the newly anointed academy is the ‘Barbara Wright Building’ in tribute to the First Doctor’s travelling companion played by Jacqueline Hill from 1963 to 1965 – as seen here in an on set tweet.

Now is it too much to ask for a William Russell cameo? Perhaps Ian can dedicate the new building to Barbara while uttering something ominous about times to come? How cool would that be?

Perhaps, as all academies are state-funded, we’re going to see some government meddling in the alien threats or even a shadowy private company operating as an ‘academy trust’ are quietly using the school for its nefarious deeds.

That’s not to mention the increased powers gifted to headmasters under operating guidelines of an academy – whether all this decreased accountability means we’ll be getting another Mr. Finch from School Reunion or The Demon Headmaster remains to be seen – but it does go someway to explain why Katherine Kelly’s character was described as a ‘powerful’ teacher.

Set in contemporary London, the eight-part series follows four students with “hidden secrets and desires” and has been described by executive producer Steven Moffat as “dark and sexy and right now”.

Class will premiere later this year on BBC Three in the UK and on BBC America in the US. 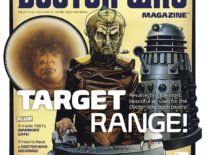 News Is This Confirmation of a Special Guest Star Appea…
8