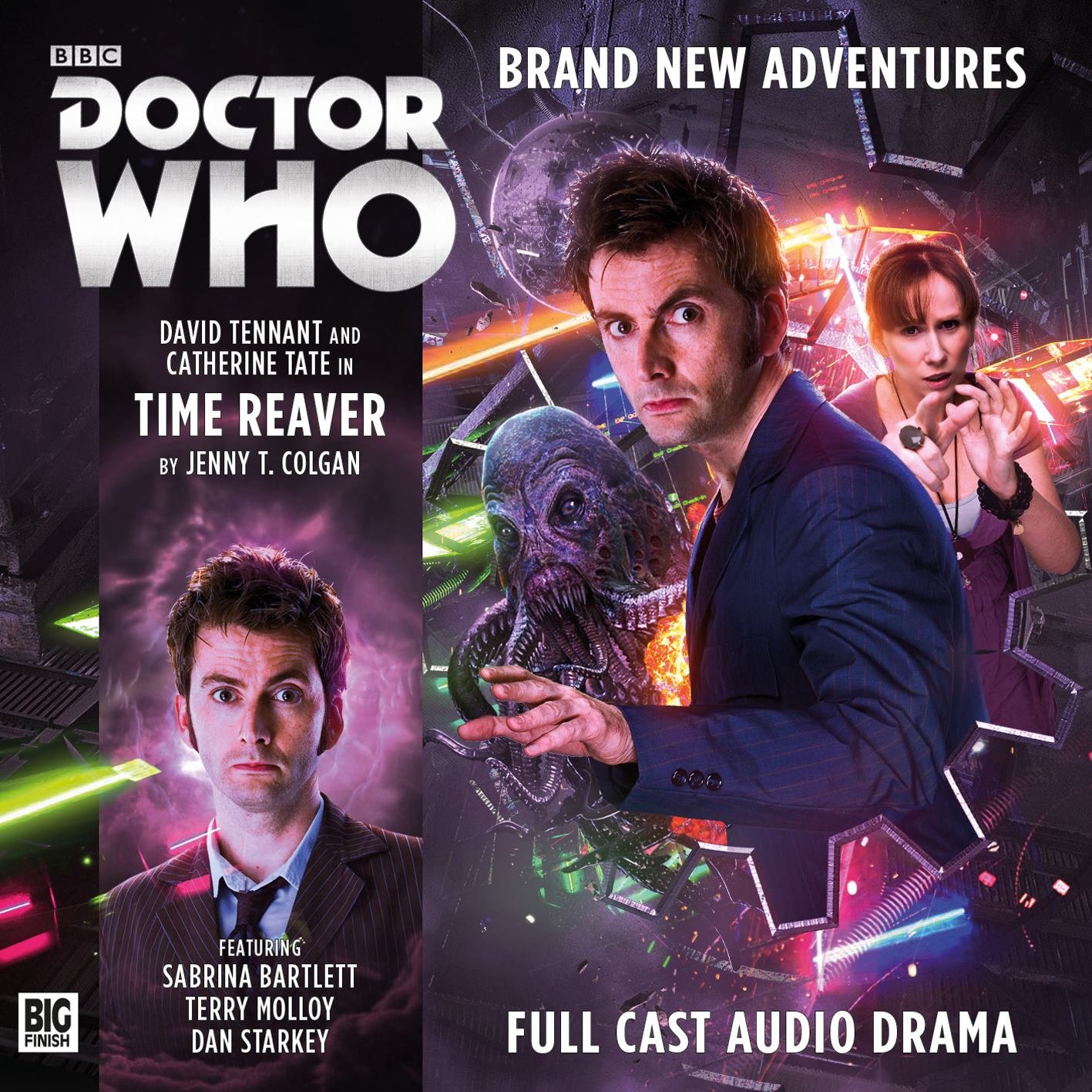 Oh, it’s been an age since Big Finish’s Tenth Doctor Adventures was announced, and wow, it was so great to hear that version of the theme tune again.

Much as I love Rose and Martha, Donna was the perfect match for the Tenth Doctor. Time Reaver, the second tale of this trilogy, showcases why their partnership works so well: their levity, camaraderie, and friendship is infectious. They’re a joy to behold – and it means the stories told can be a contrast to this.

The Fires of Pompeii (2008) was an incredibly dark episode, and that was heightened by their humour, and Donna’s gutsy, brave, and all-together human nature. The Doctor’s alienness was highlighted, but Donna wins him around, every time. He becomes relatable again. The same is true for Time Reaver.

Make no mistake: this is a gritty tale. You’d be forgiven for thinking otherwise if you’ve heard the “planet of the boys” clip released a little while ago as a teaser, but honestly, this scene is the worst part of the story. They just don’t sound quite right in that TARDIS scene. It feels forced. Fortunately, the rest is brilliant.

Let me go off on a brief tangent here. One of my favourite Disney movies is Treasure Planet (2002). It’s a beautiful adaptation of Robert Louis Stevenson’s novel, expanding the book’s horizons to infinity. Jim Hawkins’ enthusiasm and aching for adventure is the same reason the TARDIS is such an enticing prospect. Next stop: anywhere.

But space is a dark place. Treasure Planet isn’t an easy tale. There’s the pure evilness of the black hole, gobbling up the starlight and even a member of the crew. John Silver isn’t a through-and-through villain either. He actually admires the protagonist, telling him that sometime, Jim would get the chance to show everyone what he’s made of, then concludes “I hope I’m there catching some of the light coming off you that day.” It’s a stunning example of contrasts, and how those grey areas colour the best stories. This is another reason why Donna is a fantastic companion, sharing Hawkins’ love of exploration, but also why Time Reaver is a brilliant story.

Jenny Colgan has only written a couple of audios for Big Finish before: a contribution to The Diary of River Song: Volume One, and Gardens of the Dead, a Short Trips tale. But she clearly knows Doctor Who. She grew up with it, and has subsequently written the Eleventh Doctor novel, Dark Horizons; a couple of short stories for the Time Trips collection; and, released just before these audios, In The Blood. Time Reaver is another example of why she’s in-demand in the world of Doctor Who.

Better than anything, it fits the tone of the Tenth Doctor’s era, but also expands that universe, exploring the rougher, grimmer corners of it. This much is obvious from the pre-titles sequence which introduces the truly disgusting Gully (John Banks). He’s an octopus, but sounds so much like Sil the Mentor, they could easily have drafted in Nabil Shaban for the role. He’s a wonderfully vile character, revelling in the torture of others.

This is where the Doctor and Donna come in. Calibris: a spaceport full of wonder and noise. It’s a great setting: the starting point for journeys through the universe, teeming with strange life, and not all well-meaning.

Speaking of well-meaning… Sabrina Bartlett is immediately likeable as Cora, and heads a relatively small, but strong, guest cast. In fact, she plays a similar character to the one she played in Robot of Sherwood: sweet, brave, and unfortunately, a victim. I hope we hear more from both her and Gully. (The latter especially deserves to return in some sordid corner of time and space.)

The story itself revolves around Time Reaver guns that slow down time for an individual so a few moments can feel like weeks: happiness can be stretched out for months – and so can pain. It’s a genuinely unsettling prospect, a weapon that, as Donna aptly points out, means even an itch would seem like hell.

This is where sound design excels. From an onlooker, victims appear to just be speaking slowly, but we also get the viewpoint of the victim, which feels like an isolated echoing void, particularly effective if you’re listening through headphones. In a dark room. 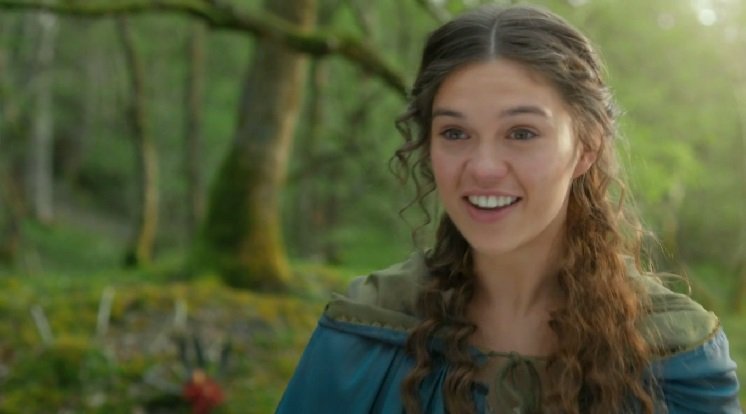 But as you’d expect from Big Finish, the sound design for Time Reaver is exceptional anyway. A spaceport, as already noted, would be loud – certainly an overload of noise if we’d been subjected to it for the full duration – but Colgan finds a clever way of toning it all down: psychic earplugs that filter out any noise apart from what you want to hear. They’re a genius idea, one that Colgan subverts then utilises in a couple of smart, understated scenes.

David Tennant and Catherine Tate are clearly having fun returning to the roles they’re most famous for, but it’s not all laughs. They’re compassionate and angry and scared. Time Reaver pushes the Doctor in an unexpected way towards the conclusion, while Donna remains her wonderful self: caring, thoughtful, and ready to stand up and make her mark.

Jenny Colgan is the perfect choice for the audio adventure. Writing for Doctor Who in general, and this TARDIS team in particular, is an enviable task. I’d give my right hand to do it (as long as I’m still in the first 15 hours of my regeneration cycle). There’s a lot of pressure, but there’s also a confidence to her plot and dialogue. She weaves in elements of Series 4 – and Russell T. Davies’ tenure on the show – throughout. There’s something on Donna’s back (and not what you’d expect); the final words of the play are beautifully ominous, like something from The Waters of Mars, and seemingly leading into Silence in the Library; and the drug-like effects of the Time Reaver guns are reminiscent of Gridlock.

And here we come back to the parallels with Treasure Planet. It’s like a romantic fairytale: a real swashbuckling adventure that manages to balance the dark with the light. In fact, I think this attitude is perfectly summed up in one touching line:

“You wanted to sell sunsets.”

After Time Reaver comes Death and the Queen, but I hope the sun never sets for this TARDIS team, given an exciting new lease for life in audio.

Time Reaver is out now, available as a physical CD, Limited Edition set with Technophobia and Death and the Queen, and as a download, from Big Finish. 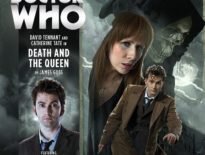 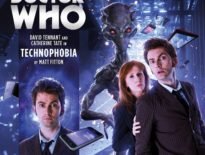