You might not recognise the name Simon Myers but you’ll certainly recognise the artwork. Riffing off some of the classic album sleeves on shelves the world over, his lifelike sketches of the Twelfth Doctor posing like David Bowie from the Heroes cover or the Eighth Doctor walking arm in arm with Josie Day like Bob Dylan and Suze Rotolo strolling down West 4th Street from The Freewheelin’ Bob Dylan, perfectly match the Doctor’s personality with the iconography.

Myers began his professional career as a graphic designer for the high-street fashion industry before decided to step away and follow his passion of illustration. Raised on a diet of American Comics and pop culture, he’s turned his fascinations into outstanding artwork for the likes of Dark Horse and now, Titan Comics.

DWC: How did you make the switch from commercial graphic design to working for the likes of Titan Comics and Dark Horse?

Simon Myers: “To be honest redundancy, but I was longing to get out of the industry, I’d lost the passion for it. When it happened at the beginning of 2014 I decided to sell my car, putting some money in the bank, and pursue what I loved, illustration.”

“For as long as I remember I have always watched the TV series, but the comics are a relatively new adventure for me, blipping on my radar when Titan took over the publishing rights. Though I do recall the Marvel books from when I was little.”

Who was your Doctor?

“Personally I loved the fun of the David Tennant and Matt Smith era’s. I rather liked how all around them underestimated both incarnations by their slightly peculiar and jovial behaviour, only for them to switch to deathly serious when they needed to. As much as I love Peter Capaldi as the Doctor, and I do think he is astonishing, I don’t quite get as much sheer joy from the episodes.”

And do you always have a specific Doctor in mind for each cover or do you tailor each for a certain Doctor’s personality?

“I do indeed have a specific Doctor in mind when creating an homage. I try and match the flavour of the era, group/artist and style of the music to the specific incarnation of the Doctor.” Describe your process from blank page to finished cover.

“It always begins with a session of sitting with a sketchbook, creating doodles and noting ideas. Once I have the idea roughed out I’ll send it across to my Editor, Andrew James. If he likes it I’ll then start constructing a photoshop montage of what I want the final image to look like.

“For example to create the “Parallel Lines” cover I found an image of the actual cover then scoured the internet to find headshots of the characters I wanted to use in relatively similar positions. I crudely pasted the headshots over the band members, but paid close attention to scale and position and size. I then used that as reference to base my digital painting on. It saves hours of time, otherwise I would be sketching, drawing, and redrawing, to get the proportions correct.

Do you pitch a specific idea for a variant cover or are they issued to you?

“At the moment I am breathing rarefied air, as I am able to pitch straight to my Editor. Though the Album Montage idea did start with Andrew. We subsequently spoke at length on the sort of Albums that we felt appropriate, and then I just ran with it.”

There’s an emphasis in your covers on recapturing an iconic cover photo like Parallel Lines and The Freewheelin’ Bob Dylan; have you ever been tempted to try to replicate a famous piece of art like 13th Floor Elevators or King Crimson album covers?

“Since childhood I have loved drawing people, and actually pride myself on my likenesses, I even produce watercolour portraits to wind down in my free time. I need to keep the projects interesting to me, so I focus on Album artwork that allows me to draw individuals.”

Are there any other iconic album covers that you’d want to try?

“‘Magic Bus’ by The Who springs to mind. But I’ve done so many recently it’s nice to move on, and possibly visit the concept later on or unless an idea comes to mind or is suggested that really strikes a chord.” Apart from the current crop of Titan releases, who are the artists whose work inspires you? What are your go to books?

“I mainline anything with the name Brian Michael Bendis on it, I simply adore his dialogue. The Spider-Man/ Luke Cage dynamic he created in New Avengers was brilliant. Dan Slott’s Spider-Man run has been epic. I have a run of  Spider-Man of 20 plus years, and this last few years have been “Amazing”.

“Artistically speaking I love the comic book artwork of Chris Bachalo, Stuart Immonen, Adam Hughes and Olivier Coipel to name but a few. But I think the biggest influence on my work is Phil Noto. Though that may lie in the fact that I have seen him quote similar influences to my own, specifically Robert McGinnis (the artist of many a 60s/70s Bond Posters).” Does your previous work in fashion play any part in deciding on the look of the companions or in your work in general – like your cover for Des Taylor’s Scarlet Couture?

“Not consciously, though there’s no denying it would have left its mark.”

When creating character studies for Amy or Clara, how much can you deviate from the look established by the show?

“It’s my opinion not to stray too much regardless. Fans are buying the books to read further adventures of characters they recognise. So even though the characters may not quite be wearing what they have worn on screen, I do try and dress them in outfits that seem like they may have been hanging in their respective wardrobes.

This is actually a bit of a bugbear of mine, I feel it’s the difference between the Marvel and DC Cinematic Universes. Fans want to see characters they recognise on screen and that is exactly what Marvel have been doing, there is a reason these characters have endured for so long in one medium, just transplant that to another. In ‘Batman v Superman’ both leads looked essentially like they’d been ripped from the page, but they weren’t the characters I grew up reading.

So for me to stay true to a character the world recognises is an important note.”

Do you plan to do more sequential work like Fashion Crimes?

“Yes, though you’re giving the three pages I created solely for my site more credit than they deserve. I’d love to work on sequential, and there are a couple of bits in the pipeline, but my cover art seems to be in demand at the moment (touch wood), so that is the priority.”

You can check out more of Simon Myers work over at Pretty Funky. 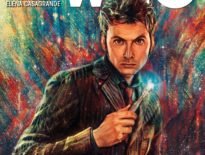 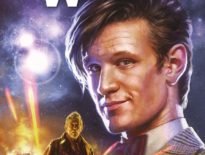