The next instalment of Candy Jar Books’ Lethbridge-Stewart novels includes a major turning point in Alistair’s life, as he’s rewarded for all his efforts since The Web of Fear (1968)… but we can’t reveal exactly what that milestone is!

“It’s something we’ve been working towards – a pivotal Lethbridge-Stewart moment.”

Now, we’re sure you’ve got a few guesses, but even Showstoppers author, Jonathan Cooper refuses to expand on what the story entails:

“It’s genuinely a massive honour to be given this responsibility; to dramatise the events leading up to something that most fans would certainly like to see. I wish I could say what it is, but that would ruin what’s going to be a big surprise… It was initially inspired by the film Dr Strangelove. At the pitching stage we even had Strangelove as the primary villain, along with a neat little twist to tie the Kubrick film into the world of Lethbridge-Stewart. But we soon moved beyond that, which gave the book a wider scope and allowed me to have a lot more fun with it. There’s still a couple of sly references in there though – including one bit towards the end that I hope readers are going to find particularly chilling.”

Indeed, the book also features an introduction by David George, son of Dr Strangelove writer Peter George, focusing on the conspiracy theories that tie it to the Kennedy assassination.

While this is Cooper’s first work for the range, he’s previously worked as Doctor Who correspondent for The Mirror and The Independent online papers. He’s also c-written a Space: 1889 novel with Frankham-Allen. Andy adds:

“Jon first came to my attention back in 2007 when I was running the eZine, Pantechnicon. He submitted one of the best short stories I have ever read, and ever since then I have tried to give him as much work as possible. The world can never have too much of Jon’s writing. His sense of humour, and great instinct for twisting a tale on its head, has always been a hallmark of his writing, and it’s this skill that he brings to Lethbridge-Stewart.”

That’s not all: The Showstoppers also introduces a fourth major lead character of the range. Head of Publishing, Shaun Russell, says:

“From day one it has always been our intent to build up something of an ensemble cast of characters, with four main characters leading the way. That started with our licensed characters, Lethbridge-Stewart and Anne Travers, complimented by our very own Corporal William Bishop, who first appeared in our initial release, The Forgotten Son. Now we’re very pleased to introduce Samson Ware to our readers. A very different character to any seen in the range before, and someone quite unique for a series set in the late-‘60s, early-‘70s, a man of Bajan origin.”

The Showstoppers is out at the end of this month, priced £8.99, and all pre-orders will receive a free digital-only short story, The Band of Evil, by Roger J Hammond and Shaun Russell.

The usual discounted pre-order bundles will be on offer from Candy Jar, with a new subscription deal for those wishing to get six books for the price of five! 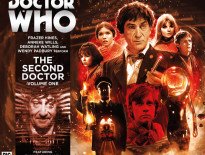 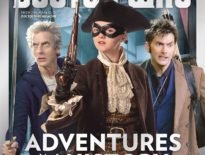 Merchandise Out Now: The Essential Doctor Who – Adventur…
4