Perhaps you’ve been reading Doctor Who Magazine from the very start; perhaps you’ve picked up issue 500 and now want to dip into the publication’s rich history. Perhaps you’ve lost your copy of Railway Modeller and DWM is the only other thing to purchase at WHSmith, which let’s face it, it should be.

No matter what’s led you here, you’re here. Intrigued to find out more about the history of DWM and some of the great issues you may have missed, forgotten about or simply want to revisit. Delve deep, dear reader, and discover here some of the DWM delights you need to find. Just don’t blame us if you buy them all and find yourself penniless and having to eat cold baked beans from a can for the rest of the month. To date, no other Producer of Doctor Who has been emboldened on the front cover and whilst you may disagree with that decision from 2005 onwards, John-Nathan Turner deserved his spot in the limelight here.

Despite some hit and miss stories between 1980-1989, the man kept the Doctor Who flame burning for a long time and was pivotal in keeping the VHS range going during the ’90s. This issue gives fans and co-workers the chance to celebrate the man himself, and it’s a doozy. At the time of publication there were only 200 Doctor Who serials (oh, how far we’ve come dear readers) and DWM once again asked their readership to rate them from top to bottom.

Even Meglos is in there. Somewhere. At the back. Behind a cactus.

Turning through the pages, you’ll also find one of the funniest Doctor Whoah! strips to grace the pages of DWM, a very clever comic one shot, as well as the Watcher’s guide to the Seventh Doctor, which is valuable reading, especially if you missed the articles the first time round. A game changer for DWM. The big one, some might say. This is where everything started to really change for our favourite monthly periodical. The format, the layout, the articles, everything was given a spit and polish to provide more bang for your buck. The comic strip debuted in colour for goodness’ sake! The Eighth Doctor’s jacket was finally given a proper debut (sorry, Radio Times comic strips, you don’t count). Newer readers of DWM (hello Millennials!) may take this for granted but for years we’d had black and white adventures. Now, here was the Eighth Doctor in colour, and all the better for it!

There’s also a cracking look at an alternative version of the Fourth Doctor classic, Pyramids of Mars, Andrew Pixley casts his clever eyes over some unknown Doctor Who mysteries – such as K-9’s original name – and Stephen Cole writing an article for Paul McGann letting the actor know what his incarnation may or may not have been up to after the TV movie (technically a pilot, but we’ll let that go) and before his debut Big Finish adventure, Storm Warning. Of course, years of hindsight should have any fan realising that the Eighth Doctor has multiple timelines because of that dratted Time War but it’s nice to have something that tries to tidy them up a bit. Oh, but this is SO long ago. Back in the early days of Big Finish and before the return of Doctor Who was even thought of as something to be considered. Still DWM soldiered on, playing to the imagination of its loyal readership and rewarding those who continued to buy with wonderful articles. There’s a load to love here. A wonderful piece is included on how the Virgin New Adventure and BBC Eighth Doctor novels continue Doctor Who after the end of its initial run, culminating in a fascinating look at the ‘what if’ era. Something that, at the time of publication, was all fans had to go on.

This issue also marks the start of one of the greatest DWM comic strips of all time, with more than one or two surprises and fan services along the way. This one stands out with its terrific article looking at the future of Doctor Who on television.

Messrs Mark Gatiss, Gareth Roberts, and Matt Jones make some astute comments that really show how stuck in the past a lot of fans were when it came to the format of the show. There’s the wonderful illustrations provided by Roger Landridge to tie in with the latest Doctor Who book releases as well as Lee Sullivan’s depictions of Big Finish adventures. In a time before new adventures on screen, stuff like this was gold dust straight out of the Eighth Doctor’s TARDIS. A glorious tribute to The New Adventures and one of the best DWM covers of alL time. This was the Doctor of the 1990s! David J Howe looks at the Virgin New Adventures from their very beginning here as well as listing the stories in full; he provides a tremendous read including some input from one Russell T. Davies. No, we’ve never heard of him either. Gareth Roberts helps the celebrations by providing a sublime one off comic strip.

There’s also the Time Team of yesteryear – see if you can find comments on the Second Doctor stories, The Ice Warriors and The Enemy of the World by a well known Doctor Who writer. A fitting tribute to actor Nicholas Courtney, who sadly passed away in 2011. No matter what happens to Doctor Who actors, you can always rely on DWM to ensure that they’re given the glory they deserve. This will bring a tear to the eye as you look back over Courtney’s illustrious career and remember one of the finest and greatest actors that the show ever had. This issue features fascinating articles on why Doctor Who works on a Saturday and the beginning of a massive 3-part article celebrating 25 years of Doctor Who. Pah! If only they’d waited to celebrate 37 years. Oh, wait.

That scamp Russell T Davies talks about how the Ninth Doctor he will be bringing to the screen is absolutely the same man who fought the Axons, the Wirrn, and the Master in 1999; and The Telesnap archive makes a welcome return. One of the anniversary year issues casts a keen eye forward looking at regeneration as well as who the next Doctor would be (hint: it would rhyme with Deeter Papaldi). Ahead of the War Doctor’s first appearance, there’s a great article that looks at some of the forgotten actors who have played a version of the Doctor.

Attack of the Cybermen is assessed in The Fact of Fiction and contained in the Galaxy Forum letters page, artist Jamie Lenman reveals how the Seventh Doctor came across his unique question mark umbrella. Meanwhile, Clara makes her comic strip debut! The issue includes Gareth Roberts’ superlative feature, ‘Everything I ever needed to know about life I learned from the ‘X’ Doctor era’, which is worth its weight in gold as well as some tasty articles on Patrick Troughton and the Daleks.

In a rare move, the regular DWM comic strip wasn’t ready at the time of publication and instead readers are offered Flower Power, a story from the pages of TV Comic – in which the Second Doctor defeats the Cybermen with…flowers. Yes, the DWM readership sighed heavily upon reading that as well.

As you can see, we’ve focused solely on relatively recent issues so these should be easily obtainable. But with 500 issues, we know we’ve missed quite a few out. 490 of them, in fact!

Which other issues of DWM do you consider ‘must-reads’?

10 Essential Issues of DWM You… Features I Wanna Go (To Skaro) 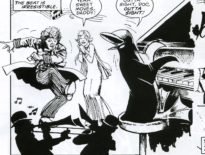