Alongside The Dominators, The Underwater Menace, and The Prison in Space, The Krotons remains one of the most popular Second Doctor serials, and is often in lists of the Top Ten Doctor Who serials. It’s no surprise, of course: this is the first story from serial scarer, Robert Holmes.

But it was never intended to be a Doctor Who story at all.

The Krotons began life as Us, Robots, an idea pitched to Channel 4 in early 1965, over 15 years before the channel existed. “I can distinctly remember charging into the Channel 4 offices, displaying my masterful masterpiece for all to see,” Holmes recalled in an interview with Heat magazine. “I managed to get past security using my brains and a large baton, and found my way into the office of Channel 4’s Director of Far-Out Stuff. He informed me that, while the script had potential, it couldn’t be broadcast on the station because there were only three channels at present (which was of course the past).”

On the recommendation of the young executive, Holmes was sent to the offices of Doctors, the long-running BBC1 soap set in the Midlands. “The script specified that the robots had Brummie accents, and so it seemed a perfect fit,” the young executive went on. Robert quickly rewrote elements of the script to incorporate Mrs. Tembe’s susceptibility to sulphuric acid. Unfortunately, this again led to rejection: Doctors would not be screened until March 2000, and Tembe wouldn’t debut for a further 11 years after that.

All this is testament to Holmes’ forward-thinking mentality, but nonetheless resulted in Holmes filing the plot in his files among other files in a filing cabinet. Filed away, the file was soon forgotten about while Holmes got on with contributing to series such as The X Files, Don’t Scare the Hare, and The Holy Chap Played By Roger Moore.

Holmes chanced upon his Doctor Who outline after Peter Bryant had taken over as producer. “I wasn’t keen on science fiction,” Holmes told This is Beneath Us, the infamous geography magazine. “It all seemed so damn immature. My story about Brummie robots in skirts was an unusual foray into the genre, and one that I thought was too realistic and mature to be considered sci-fi. But this was the Sixties and keeping up with the latest fashion trends was costly business, so I felt determined to get something else made. I couldn’t be bothered to create a new plot, so I opened the filing cabinet that contained all the files I’d filed away amid other files, and one such file contained what I had renamed The Croutons.”

Impressed with his work, Bryant passed the outline on to script editor, Derrick Sherwin and his assistant, Terrance Dicks. While Sherwin was positively repulsed by the idea, being forced to miss a weeks’ work due to ‘severe illness and an inability to look at pulped trees anymore,’ Dicks liked The Croutons, but told Holmes there was no space for it in the upcoming series. Sharples, however, got the wrong end of the stick when a member of staff called him a very naughty boy, stormed out of the BBC, and never wrote for the corporation again, aside from the times he did write for them again.

With Sherwin still nursing a bout of terrible sickness at his home, Terrance Dicks was determined that The Croutons would fill that space, and Holmes happily rewrote the four-part story to include the Doctor, Zoe, Jamie, and the Croutons in the place of Heston Carter, Karen Hollins, Al Haskey, and Mrs. Tembe. “I had to cut out a lot of swearing,” Dicks later admitted to the BBC’s 1960s in-house publication, Prim ‘n’ Propa.

The serial was handed over to director, David Maloney, assigned to the story after the success of his directorial debut on Doctor Who, The Mind Robber. “I like the way it was in black and white,” Dicks also mentioned in passing.

With that feedback in mind, Maloney set out to create a second serial in black and white, only to find out that his technique wasn’t as pioneering as he first thought: in fact, all previous episodes of the show up until that point had also been shot in monochrome, apart from the episodes that are currently missing from the BBC archives – all of which are in so glorious a technicolour, they’d make Adam West’s Batman look like Schindler’s List. Marco Polo is like Battling Seizure Robots. Costume designer, Bobi Bartlett was enthused to find herself creating the costumes for the Croutons, drawing up the designs so they were economical and sleek. She was as disappointed as the rest of the cast and crew when the final products came back from the prop-makers. “They were only supposed to be 15.4cm tall,” she complained in the letter’s column of Tales to Astonish.

Taking her complaints to set, Frazer Hines was furious to overhear Bartlett saying, “those skirts look ridiculous on grown men.” She apologised for the remark by buying him deep fried Mars bars, deep fried fries, and Deep Roy’s deep fried Peking Homunculus, all available from the nearest McColls.

Inspiration for the Croutons, described in the script as being a ‘crystalline structure,’ came from Bartlett studying the Miller indices, polymorphism, perovskite minerals, fractional coordinate systems, the Schoenflies notation, and a proof copy of Mystic Meg’s Astrolife.

The script went down particularly well with the series regulars: Wendy Padbury was pleased to see Zoe being given the chance to prove her genius; Patrick Troughton was happy that his female co-star was given superior footing to even the Doctor; and Frazer Hines thought the Gonds sounded rude.

All four episodes, aside from on-location work, were filmed in Lime Grove Studio D in late November/early December 1968. “After the comparatively large number of scenes filmed outdoors for [previous serial] The Invasion, it was great to work in a claustrophobic area the size of a public toilet cubicle,” Patrick Troughton told Kevin McCloud when the Grand Designs presenter was just 12. The sets were reused for The Crystal Maze; the Ryan Reynolds movie, Buried; and A Brief Look at the Kardashians’ Trophy Cabinet. The Croutons was screened in December 1968 and January 1969, but its transmission was somewhat marred by the news of Troughton leaving the show being leaked in between episodes. A stray email was accidentally sent to all BBC personnel, announcing that “following the 1969 series, Doctor Who will return with a new leading man in 128 episodes across five seasons to air between 1970 and 1973 (roughly). What’s more, viewers will be able to see the show in colour for the first time ever (apart from those Peter Cushing films that we put out to make loads of dough).”

The BBC show, Points of View received a raft of complaints about Troughton’s upcoming departure, to which the Beeb responded: “For goodness sake! What do you expect us to do, tie him to a chair and force him to watch The Web Planet until he submits?! Morons.”

Many viewers were, however, enthused about the announcement, with SMSLover298 tweeting the show, “I look forward to seeing Doctor Who in colour; I trust that we’ll no longer be subject to barren alien landscapes that are actually just quarries, dodgy robots, and a Doctor that dresses stupidly.” Unfortunately, this was too long for the character limit.

The Croutons went down very well; so much so that when miscellaneous personnel started scrapping classic episodes, the BBC Director-General stormed from his office, located in Thames House, and screamed, “Not The Croutons! Won’t somebody please think of The Croutons?!” The four-parter was thus saved from The Brink of Disaster (coincidentally, another episode set to be junked but saved by archive selector, Sue Malden activating the Fast Return Switch).

Holmes was, of course, invited back to write numerous adventures for the Doctor, including I Really Don’t Like Paying Tax, Let’s Upset Mary Whithouse, and The Two Doctors and the Burnt Sontarans Flying Around in Spain. 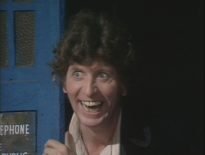