I had one of those wonderful moments when you finally manage to clear up a long-standing mystery as I read Robert Holmes – A Life In Words.

It was one of those childhood memories we all have of a TV programme that made a big impression but you don’t know the title or any details about it. But thanks to Richard Molesworth’s 2013 biography of Doctor Who’s greatest writer I was finally able to fill in the details of my memory of a thriller series that seriously freaked me out as a kid. Armchair Thriller was the programme and it was a four-part story by John Bowen called Dying Day, the tale of Antony Skipling, a man who stumbles upon a plot to kill him thanks to a strange audio recording that I remembered so vividly. Holmes was script editor on the series and I think you can detect his influence in this clip, the cliffhanger at the end of episode one (be warned, it’s not for those of a nervous disposition…).

Not difficult to see why that made such a big impression on a ten year old, eh? And doesn’t Ian McKellen look young? It was wonderful to find there was a Holmes connection with such an enduring non-Doctor Who memory, and I now like to imagine Holmes sitting the writer down and puffing away on his pipe as he gave a mini-lesson in the art of crafting an effective cliffhanger, a skill he had honed during his time writing for and script editing Doctor Who.

Although reading Molesworth’s book provided the unexpected benefit of being able to scratch this particular itch that had been bugging me, off and on, for over three decades, I found much of it hard going to tell the truth. It’s incredibly well researched and provides a huge amount of detail on every writing credit Holmes ever earned, but the long stretches where we’re provided with extensive plot details on episodes of long-forgotten programmes like Knight Errant and Family Solicitor don’t make for the most riveting read. Holmes is credited with writing dozens of episodes of 1960s medical soap Emergency Ward 10 but I can’t say this book had me rushing to check their availability on DVD. 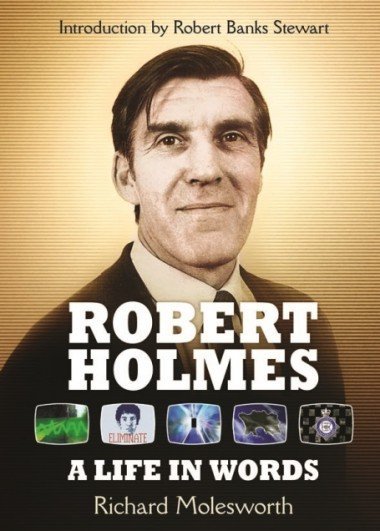 There were times when I yearned for more biographical information to form an impression of what sort of a man Holmes was but Molesworth is honest in admitting that such detail simply isn’t available; of Holmes’s childhood: ‘Not much is known about Bob’s youth’; of his time as a police constable: ‘The degree to which his own experiences as a beat copper were later recycled into his own scripts is difficult to ascertain’; and so it goes on.

It’s through no fault of Molesworth that this vagueness exists and it probably wouldn’t have been an issue for me had it not been for Richard Marson’s recent biographies of two other significant figures in Doctor Who’s history – JNT: The Life and Scandalous Times of John Nathan-Turner and Drama and Delight: The Life of Verity Lambert, books which have raised the bar for all future chroniclers of the programme’s behind the scenes personnel. Marson offers brilliantly rounded portraits of his subjects which give a genuine insight into their characters, their lives, their brilliant qualities and their flaws. You can’t hope to come away from reading the Holmes book, excellently researched as it is, with anything like the same feeling.

The key difference, of course, is that whilst Nathan-Turner and Lambert were both (in very different ways) strong personalities with a flair for promoting the programmes they made and leaving a strong impression on those who encountered them, Holmes was happy to remain in the background, meaning there’s an inevitable deficit in terms of candidates for a biographer to seek out for interview. Holmes emerges, as far as we’re able to tell, as hard working, thorough, prolific, and perhaps not the easiest person to deal with – Terrance Dicks describes him as ‘not easy-going and acquiescent… he would grumble and make a fuss and occasionally lose his temper. Like a lot of talented people he was occasionally hard to handle…’ It seems he had little time for the notion that programmes like Doctor Who could in any way be considered art and, although there are many examples of him giving interviews to fanzines and responding to letters from fans in the book, it’s easy to imagine that he would have been uncomfortable in front of an audience at a major convention or being interviewed on camera.

As it is, the only footage we have of him is a script conference with Terrance Dicks and Graham Williams, staged for the cameras filming 1977’s The Lively Arts documentary. It’s a great shame that Holmes died before the age of the DVD extra as it would be wonderful to have his sharp insight into Doctor Who and the many other programmes he worked on preserved on camera.

But perhaps he would have wanted it that way – for his career to be judged by what was on the screen rather than through analysis of his personality or of what it was that made him such a great writer. Any need we feel as admirers of his work to know more about the man behind those wonderful stories is our problem, not his.