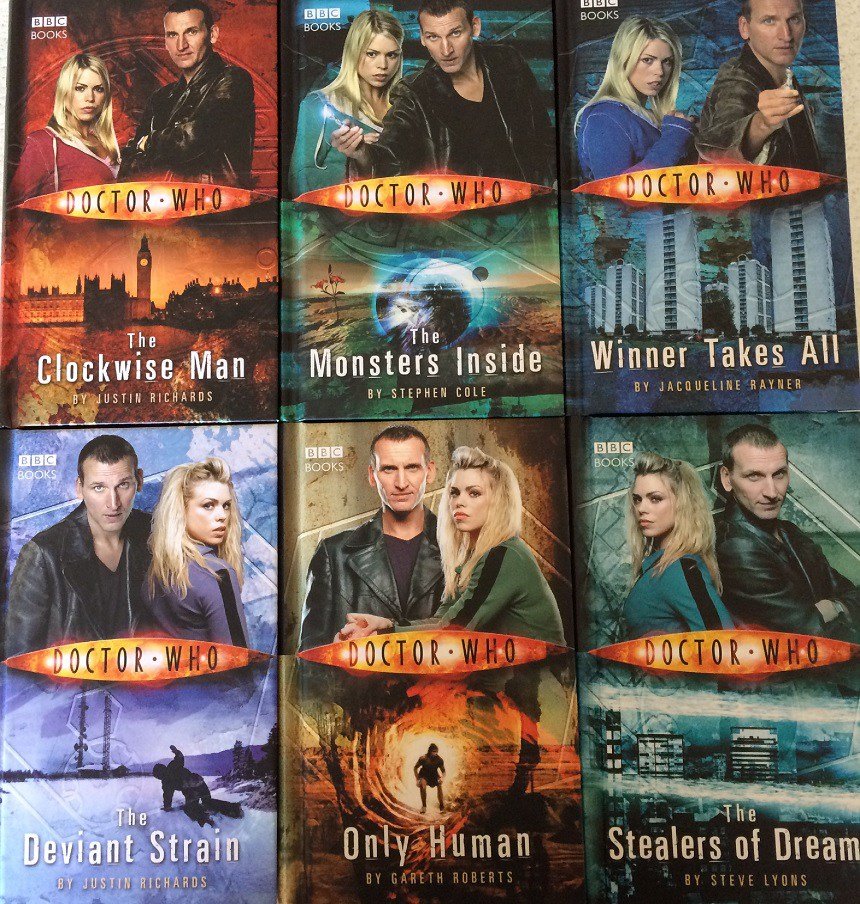 When the BBC New Series Adventures (NSAs) launched, there were some notable differences from previous books. First, each of these new books was hardcover with a larger font—meaning the word count was somewhat smaller. Second, there was a stronger tie to the televised series. This was particularly true when compared to the NAs and EDAs, which continued the Seventh and Eighth Doctors’ plots after their time on screen. Finally, the themes and tone of the NSAs were written for a wider audience than previous texts. The philosophical contemplations, cross-continuity references, violence and adult themes that often popped up in earlier texts were gone, in favour of a text which was more accessible to new and younger audiences.

Characters in the New Series Adventures directly reflected the current televised cast. Having launched concurrently with the renewed series, the first batch of books included the Ninth Doctor and Rose Tyler. These books were, in release order: The Clockwise Man by Justin Richards, The Monsters Inside by Stephen Cole, and Winner Takes All by Jacqueline Rayner. This batch is most easily placed, in order, between Aliens of London / World War Three and Dalek. The second batch of books, released later that year, included the Ninth Doctor, Rose and Jack Harkness. These books were, in release order: The Deviant Strain by Justin Richards, Only Human by Gareth Roberts, and The Stealers of Dreams by Steve Lyons. The first two books in this batch are most easily placed between The Empty Child / The Doctor Dances and Boom Town, with the third book between Boom Town and Bad Wolf / Parting of the Ways.

Published over a decade ago (!), the narratives for these books hold up well — potentially better than some of the 2005 televised episodes — and they bring a feeling of nostalgia for the Eccleston years. While each book is well worth picking up, a few stand out above the others. To help you choose which books to seek out for the first time, or to dust off and revisit, we’ll rank each novel for quality, readability, and general entertainment.

As a note, readers should keep their eyes open for Bad Wolf references, which, just like the televised episodes, appear in each book in the Ninth Doctor NSAs. Justin Richards makes this list twice, having been the only author to write more than one New Series Adventure for the Ninth Doctor. In this story, the Doctor and Rose are on the hunt for a murderer stalking the streets of London in 1924. Upon losing the TARDIS, the Doctor drags Rose into a conspiracy of refugees from the Russian Revolution, and both fall under the cold stare of a mysterious cat. The story includes clockwork robots and references to the Time War, themes now familiar to nuWho fans.

Comparing this text to the previous BBC and Virgin novels, it is clear that the target audience for the first of the NSAs is significantly younger than past novels, but the story is solid enough to remain interesting despite the less challenging reading level.

That said, it reads very quickly, there’s a cliché connection to Tsar Nicholas II, and major character’s personality alters abruptly near the end. It’s a fun romp, but may leave the reader wanting. 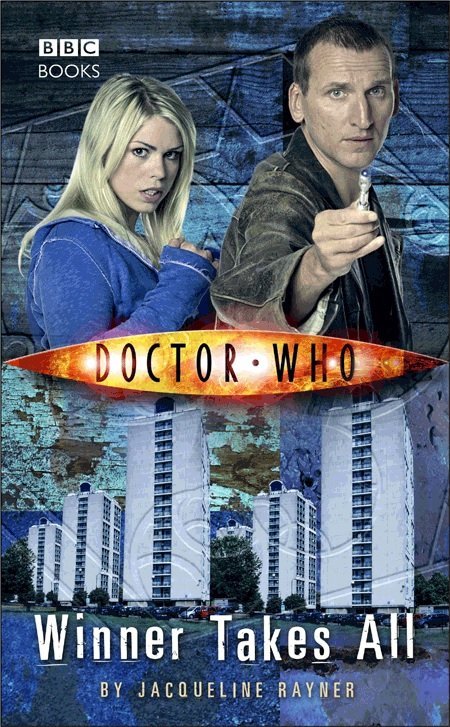 Jacqueline Rayner has written several novel-to-audio adaptations for Big Finish, in addition to being one of the few female authors writing Doctor Who novels. Her contribution to the NSAs includes the first appearances of Mickey and Jackie in novel format. When Rose convinces the Doctor to bring her home to visit, they soon discover London falling under the spell of a video game  known as Death to Mantodeans. Only Mantodeans are real, as are the Quevvils who are at war against them, but the Quevvils need humans to fight their battles for them.

Of the early NSAs, this story probably has the silliest villain, but that isn’t necessarily an inaccurate representation of Series One. The characterisations of the Doctor, Rose, Mickey and Jackie feel and sound very much like their televised counterparts. Likewise, the adventure plays out the nuWho theme of aliens attacking London under the guise of something banal. Still, giant porcupine aliens with projectile quills make for a hard sell. In The Deviant Strain, the Doctor and Rose are joined by Captain Jack Harkness for the first time in novel format. The TARDIS team lands at an abandoned Soviet naval base, only to be joined by Russian Special Forces. A flash of psychic paper and the team is entangled in a situation involving disease and a vampire-like menace.

This is better than Richards’ first stint with the NSAs. Yet, while the alien menace is interesting, the threat is overly complicated and never quite seems to achieve the author’s intention. What could have been Doctor Who a la John Carpenter gets jumbled into a Cold War thriller with folklore, aliens, and technological shenanigans.

Despite the odd mix, it somehow all works and the story retains a reader’s interest through to the end. Stephen Cole is known by many for his work as range editor for the BBC Past Doctor Adventures and Eighth Doctor Adventures. Here, Cole introduces a new family of Raxacoricofallapatorians — the Blathereen — who would later appear in The Sarah Jane Adventures. This novel tells the story of the Doctor and Rose’s visit to the Justicia prison star system, later mentioned in the episode Boom Town. Separated almost immediately upon their arrival, the TARDIS crew soon become prisoners on separate detention planets.

The younger target audience can, at times, be a bit distracting. However, the voices of the Doctor and Rose are well developed, and the story is engaging. If you aren’t a fan of technobabble, there are moments that might disappoint, but links to other areas of the Whoniverse should make it worthwhile.

2. The Stealers of Dreams Steve Lyons regularly pops up across Doctor Who media, writing novels, short stories, audios, and comics. In The Stealers of Dreams, he tells the story of a world where fiction is outlawed. The arrival of the Doctor, Rose and Jack — who live lives that sound as fantastic as fiction — make them instant outlaws.

The Stealers of Dreams is the second novel to feel as if it has found a way to truly embrace the shorter, all-ages format. Figuring out the overarching mystery is part of the fun, but the story holds up to a reread. In fact, knowledge of what’s to come only seems to make a second read-through more fulfilling, as it offers a chance to see the structure of the narrative and the subtle clues missed during the first reading. The three protagonists are each given their own unique sections of the story, before bringing them together for the fulfilling conclusion. Gareth Roberts has written some fantastic episodes of Doctor Who, as well as some of the best NAs and MAs for Virgin (many of which have been adapted to audio for Big Finish). His novelisation of Douglas Adams’ unaired Doctor Who adventure, Shada, was a fantastic read and the highlight of the 2012 BBC novel releases. It should be no surprise that he tops the list of New Series Adventures with Only Human. And yes, we featured it in the list of essential NSAs to read too.

The Doctor, Rose, and Jack arrive in modern-day London, only to find a Neanderthal man named Das. While Jack watches over Das, the Doctor and Rose travel back to 29,185 BCE, in an attempt to determine what brought him to the present in the first place. Upon arriving, however, they discover a group of researchers from the future. There begins an adventure spanning millennia.

Only Human is the first text in the NSAs to really feel as if the author has figured out how to best use the format. Written for all ages, it doesn’t seem to talk down to any member of the audience. Also, it embraces the shorter format, never slowing down, even as it reaches the final pages. And, while the story includes several humorous moments, it never tips over the edge into the realm of silly.

Certainly the best of the first six volumes of NSAs, Only Human by Gareth Roberts is a highly recommended read.

If you haven’t yet read the New Series Adventures of the Ninth Doctor, or any of the Doctor Who stories presented in novel format, these stories are a fantastic way to get a little more Doctor Who between seasons.

So, which book are you planning to read or re-read? If you’ve read some or all of these stories before, how would you rank them differently? If you’re a New Series Adventure fan, where would you rank the Ninth Doctor novels in comparison with the Tenth, Eleventh, Twelfth, and War Doctors’ NSAs?

(Originally appeared on Kasterborous in June 2015.)

From The Clockwise Man to Stea… 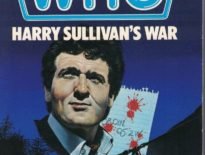 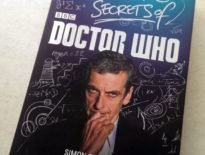