Lovarzi is at the London Film and Comic Con this weekend, and we’ve teamed up to offer you 10% off when you buy two or more Doctor Who items from their stand.

You can find Lovarzi on the ground floor of Olympia National – look out for the Fourth Doctor standee, wearing a scarf! – and all you have to do is select two of more products from their Doctor Who range and show your smartphone, displaying this article, to anyone behind the Lovarzi stall. If you can’t get Internet in the Olympia, a screenshot will be acceptable, so come prepared!

If you’re an Eleventh Doctor fan, you’ll love The Pandorica Opens Scarf, a 100% pure silk digitally-printed scarf emblazoned with the painting supposedly by Vincent van Gogh. If you’re a truly dedicated Fourth Doctor cosplayer, there’s a full-length 18ft Season 16/17 scarf available to wrap around you! And if it rains over the weekend, you could pick up either the TARDIS Stick Umbrella or the ‘Time Lord’ Folding Umbrella!

On the Lovarzi stand, you’ll also see some Star Trek and Sherlock products, so it’s a perfect place to indulge in your passions.

If you’re heading to the convention this weekend, have a great time! 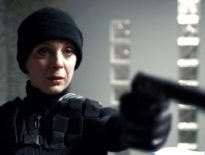 News Sherlock Series 4: Could This Be The End of Mary?…