This fandom is really great at rallying around a good cause, and right now, there’s a Doctor Who author who needs our help.

Tommy Donbavand, writer of Shroud of Sorrow, was diagnosed with inoperable throat cancer in March, but admirably set up a blog charting his experiences in an effort to help his own understanding of what he’s battling, and to help others who may find themselves in a similar position. Sadly, Tommy’s been in and out of hospital and, even though things were beginning to look up, he’s had to go back in again for tests after he started coughing up blood.

Another issue is that Tommy has had to temporarily give up work, including speaking events, school writing workshops, and weekly cartoons in The Beano, so his family – wife, Kirsty, 17-year-old son, Arran, and 9-year-old son, Sam – are having to rely on their savings.

That’s where fans come in. Of course, letting him know we’re thinking of him really does help. But if you’re able to donate even the smallest amount of money, we know it’ll be greatly appreciated.

How? You can donate any amount via PayPal on Tommy’s blog; you could sign up on Patreon, meaning a monthly amount of money is withdrawn, in exchange for regular exclusive content (including writing tips) from Tommy or one of his friends; or you could buy one of his books, like Scream Street (now a CBBC TV series), Fangs Vampire Spy, and that 2013 Doctor Who novel, Shroud of Sorrow, starring the Eleventh Doctor and Clara Oswald.

That’s not all: A Target for Tommy is a collection of Doctor Who-themed short stories by a number of Tommy’s writing friends including Paul Cornell (Father’s Day), Daniel Blythe (Autonomy), and Steve Cole (The Feast of the Drowned). It’s published by Obverse Books, spearheaded by Stuart Douglas and Paul Magrs. The paperback is now sold out, but you can still get an ebook version for just £5.99.

(Thanks to Matt Badham) 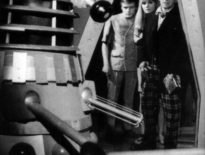