I remember being particularly annoyed back in 2013. After each episode of Doctor Who Series 7b, I’d take to the internet expecting fans to be as enthused as I was. But forums were filled with people complaining. Endlessly.

Three years later, Series 7 is still held in similar regard, and that infuriates me, especially after the number of rewatches I’ve had.

As such, this is my opportunity to highlight the truly special moments in that run of episodes, where the Eleventh Doctor is joined by Clara Oswald. I’m excluding The Snowmen as, even though it’s full of great moments, I consider it something of a stepping stone, a transition between two eras. I’m also discounting The Day of the Doctor and The Time of the Doctor – again, both filled with wonderful scenes, but they’re the 50th anniversary specials, aren’t they? They’re not really part of Series 7b.

So, without further ado, let’s celebrate a wonderful series.

10. Clara’s Childhood, The Rings of Akhaten.

The pre-titles sequence for The Rings of Akhaten is very understated and very special too. Never before have we got such a brilliant snapshot of a companion’s life before stepping into the TARDIS.

It was there to reaffirm that Clara’s just an ordinary girl, not related in any way to Scaroth, River Song, or – yes, I’m going to say it – the Rani. Nonetheless, it was so unusual, you can’t help but be impressed with the taut narrative and the way writer, Neil Cross paints Clara so simply and quickly. Apart from Steven Moffat, I’d argue that Cross is the one who’s cemented her character more than any other scribe: both this stunning story and Hide are the template for what Clara should’ve been and, indeed, was… until she turned stroppy and bossy in Series 8.

People complained about Clara merely being “The Impossible Girl,” not a fully-rounded character, but that’s purely because she’s very subtly portrayed and written.

I’m proud to admit I’m a big fan of The Rings of Akhaten, and part of that is because Clara’s backstory – as heartbreaking as it is – is that of a typical person. She grew up with loving parents, then something bad happened, and her life was put on hold. She has ambitions (to travel the world), but there’s always something else to do first. Isn’t that the story of everyone?

I don’t think I’ve ever appreciated the wonder of a companions’ first trip into time and space as much as I did with Akhaten, and I think that’s partly due to this brief but sweet sequence, topped off with The Leaf, a simple but fairytale-esque track by Murray Gold.

9. Tears for Trenzalore, The Name of the Doctor.

We all know what a fine actor Matt Smith is, and it’s especially incredible how he can turn on the head of a pin. He’s funny one minute, and the next, he’s the personification of fury. Remember when Alaya tried to defend herself by saying she’s the last of her kind? The Doctor passes it off, recognises the tactic, charmingly informs her that he’s the last of his, then suddenly demands, “so don’t insult me.” There was a real weight behind that line. Stunning.

He does one of these characteristic turns in The Name of the Doctor too. Now, Name, Day, and Time (and Night, actually) are all explorations of death, and when Clara tells him that his friends are lost forever more unless he goes to Trenzalore, we see the Doctor – afraid. Afraid of his fate, afraid of time marching on, simply afraid.

Tears are in his eyes, and that’s a rare thing. It’s genuinely spine-tingling.

Name, Day, and Time are about death, but that also means they’re explorations of life. And the Eleventh Doctor has always felt like the most joyful of incarnations, simply brimming with life; to see his bravery when facing what could be The End is haunting and inspiring at the same time.

Matt particularly enjoyed Tomb of the Cybermen when he watched it, so it’s sad to say that his only full-blooded Cyberman story (because they only cameo’d in The Pandorica Opens and Closing Time wasn’t really focussed on them) is a bit of a let-down.

That’s not to say that Neil Gaiman’s second Doctor Who tale doesn’t have its moments: many of these feature Matt acting his socks off as both the Doctor and the Cyber-Planner, many others are solely to do with the Cybermen – and this stand-out scene features both the Cybermen and Mr Clever.

Sure, I could’ve gone with the direct homage to Tomb of the Cybermen, but there’s something truly chilling about seeing the Doctor, infected by cybernetics, taking such pleasure in announcing that the Cybermen are at the door.

The Parting of the Ways showed us the extent of a Dalek invasion force, fully realised in a way Planet of the Daleks, for instance, simply couldn’t, and we’ve seen plenty of their armies since. But we’ve not really seen such a strong rank of Cybermen. Rise of the Cybermen/ Age of Steel did well, but Nightmare in Silver really envisages them as an indestructible, seemingly-endless production run of them, all lined up outside Natty Longshoe’s Comical Castle.

7. The Eye of Harmony, Journey to the Centre of the TARDIS.

Journey to the Centre of the TARDIS is a bit of a rocky ride: plenty of the good, but lots of bad too.

While the robotic (but-not-actually- robotic) brother storyline is a misjudged move, the serial does at least deliver what we’re promised: a proper exploration of the Doctor’s incredible Time-Space Ship. That includes a brief look at the swimming pool, a meander around the Library, lots of corridors, and, most pleasingly, the Eye of Harmony.

Writer, Steve Thompson actually makes the TARDIS feel dangerous, and there’s something awe-inspiring and blazingly scary about this star, ripped from its orbit and suspended in a permanent state of decay – and trapped in amid the twisting maze of the ship.

Of course, I’m sure many fans took exception to it because the Eye of Harmony is quite ambiguous. Is it on Gallifrey, as established in The Deadly Assassin? Is it in each individual TARDIS, like the 1996 TV Movie reckons? We’ve all got our own theories, and I like to think that separate versions of the very same Eye of Harmony exist in every single TARDIS, echoes of the thing Rassilon brought back from that great void.

Whatever your reasoning, I can’t have been the only fan to elicit a “wow” when the Doctor, Clara, and co. ventured into that howling chamber.

I love a good base-under-siege tale, and if the preceding 40 minutes are top-notch, I don’t especially care if the end is something of a cop-out, with the Ice Warriors teleporting their lost comrade back to their ship.

Nonetheless, it was a cop-out. However glorious the Ice Warrior ship was, hovering over the North Pole, I can’t award it “special moment” status because it ultimately undermined the episode.

Oh, but Cold War is excellent. There’s such immense tension throughout, powered by a brilliant cast with excellent direction from the always-reliable Douglas Mackinnon. The really awesome thing, though, was having the Ice Warriors back: last seen in 1974, it felt like they’d never return. The Doctor turning around to see Grand Marshal Skaldak in all his glory is a truly wonderful moment. His realisation that this is an exceptionally dangerous Martian certainly adds to the drama.

Seeing an Ice Warrior out of its “shellsuit” might also be a special moment; it’s definitely an important part in Doctor Who history, but it’s too divisive to highlight on its own. It’s a shame the only way Mark Gatiss could convince Steven Moffat that these lumbering enemies had a place in modern Who was by stripping way its armour, and while Skaldak’s viciousness is particularly memorable, it’s also worth noting how the tensions ramps up an extra gear when he returns to his normal surroundings. It lends an added weight, figuratively and literally, to those final scenes.

Still, it was great to have the Ice Warriors back. Here’s hoping we see them again soon.

So there are five special moments of Series 7b, but join the DWC again tomorrow to see further highlights from the likes of Hide, The Name of the Doctor, and The Bells of Saint John… 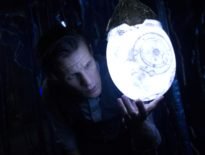 Features 10 Special Moments from Doctor Who Series 7b: Part… 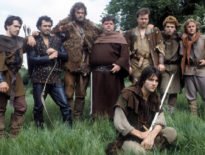 Features Why You Should Watch Robin Of Sherwood (Even Thoug…
25