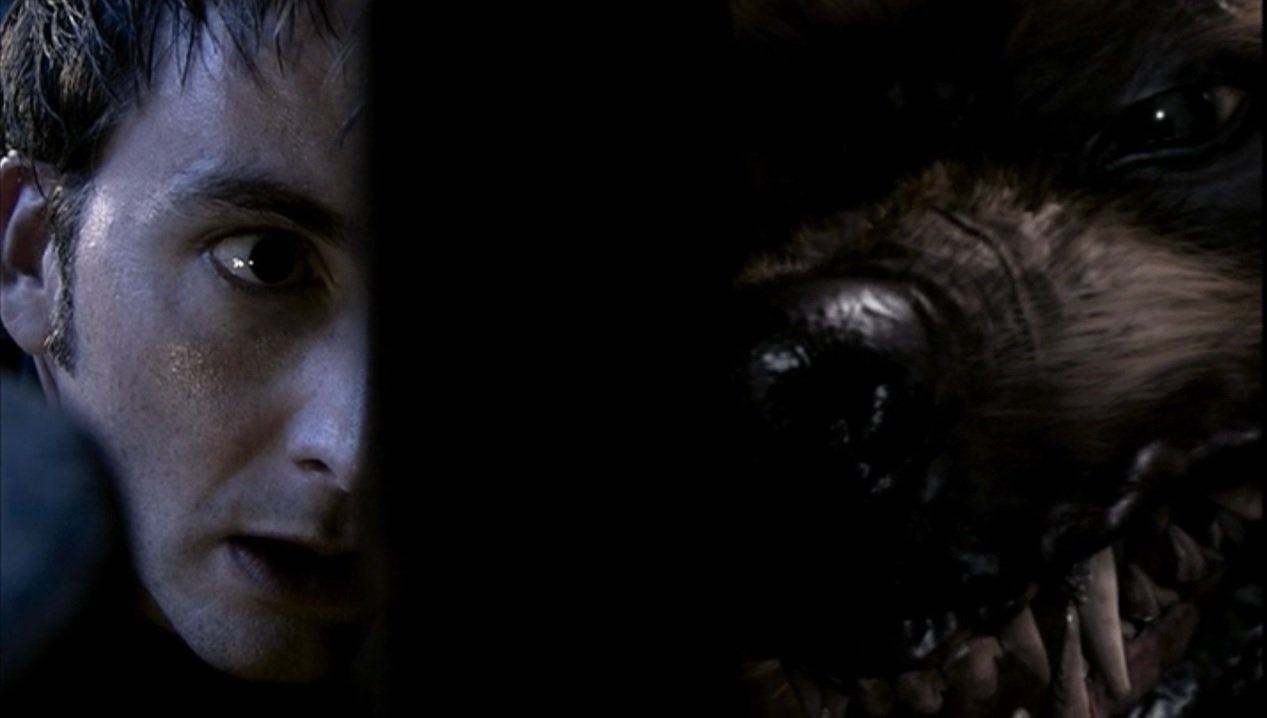 With Hallowe’en around the corner, it’s a perfect time to look at modern fairytales: of men who turn into animals, of towering beings with towering egos, and of scary women taking to the skies on broomsticks.

In the Eleventh Doctor era, Doctor Who was said to be a fairytale. In the 1990s, comedy genius Spike Milligan and musician Ed Welch summed up fairytales as ‘wolves, witches, and giants.’ Matt Smith’s run didn’t feature these heavily – but does Doctor Who in general?

There’s a chill in the air. The wind is howling through the eaves. Let’s talk of monsters.

Now, Doctor Who is full of cults, right? There’s always something worshipping something else or flailing about, showing off their magical powers. But there aren’t many stories actually dealing with witchcraft itself. 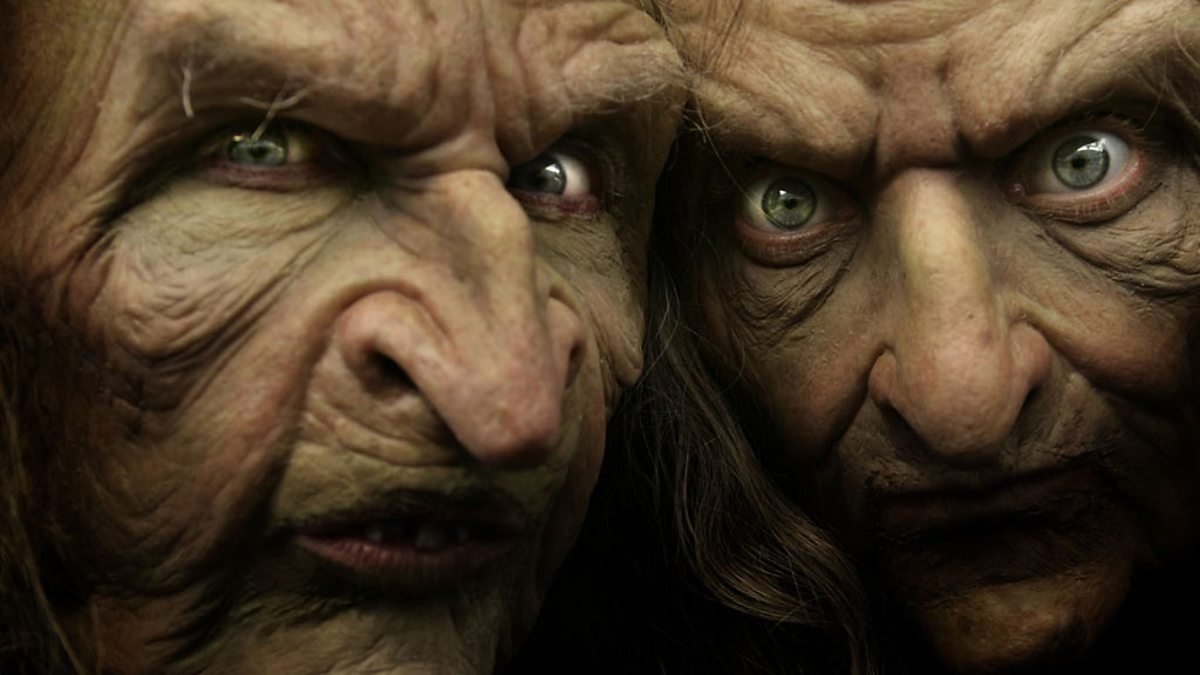 The most notable, of course, is The Shakespeare Code (2008) in which the Carrionites caused the Bard all kinds of toil and trouble. It was a perfect match: Elizabethan England was obsessed with the supernatural, and Shakespeare’s work reflects this. A Midsummer Night’s Dream heavily revolves around magic; the force behind Hamlet is the apparition of the ghost of the titular character’s father; and there are accusations of witchcraft amid the brutal realism of Othello.

Macbeth is the shining example of sorcery, however, supposedly debuting in 1606, roughly seven years after the setting of The Shakespeare Code. The Three Witches that open the play immediately bring the Carrionites to mind, just as they feature in the first scene of the Gareth Roberts-penned Doctor Who. In both, they prove to be a temptation, Lilith’s looks drawing in the doomed Lute-player Wiggins, and the Three Witches’ promise of greatness enticing Macbeth.

Banquo, who meets the Witches alongside the titular character and learns about the future’s monarchy from them, describes the triptych as looking “not like th’ inhabitants o’ th’ Earth.”

Lady Macbeth is also seduced by the supernatural. Her controlling nature and addiction to power turns her into a madwoman, eventually leading to her demise; the idea of a manipulative woman with ideas above her station descending into witchcraft was prevalent in Shakespearian times.

The Carrionites get the better of all the men they meet, dispatching the Master of the Revels with ease, leaving Peter Streete to his insanity, and even besting the Doctor with a snippet of his hair. The only man who stands a chance against them is William. 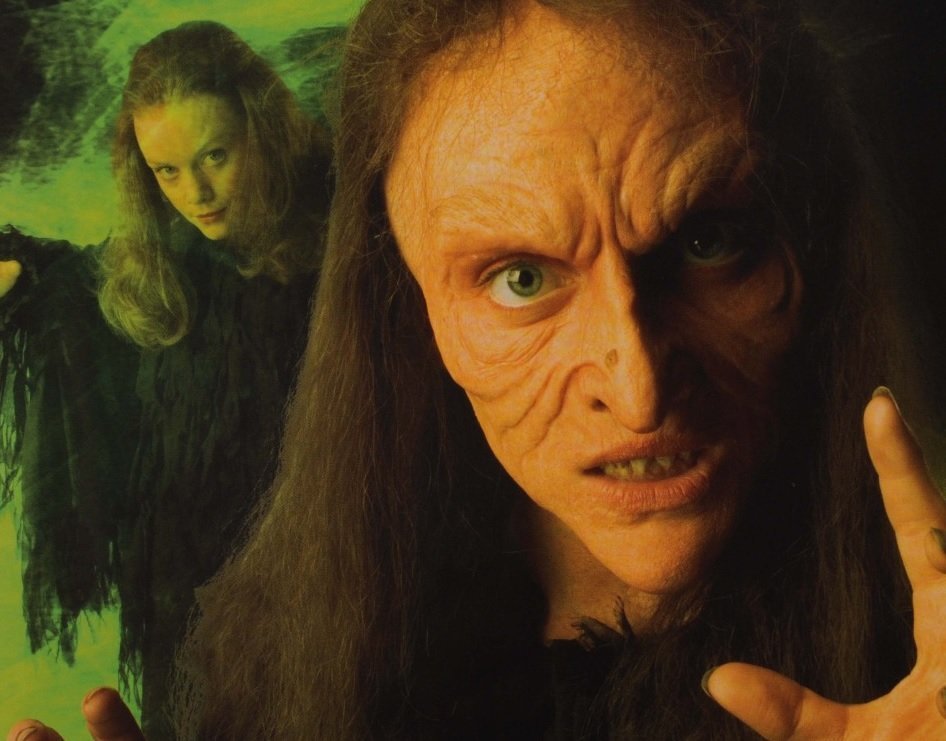 We may balk at the idea now, but witchery was a very serious concern in that era. Queen Elizabeth I even issued the Witchcraft Act of 1562, stating that anyone practising sorcery resulting in the destruction of another human should “be put to death.” The public essentially blamed the supernatural world for human suffering – and the panic wasn’t confined to the UK. The most infamous example of this occurred later on that Century: in the early 1690s, the Salem Witch Trials saw the execution of 20 individuals, mostly women, throughout Massachusetts. (Indeed, Steve Lyon’s First Doctor novel, The Witch Hunters saw Susan’s horrified attitude to the injustices.)

In the Whoniverse, it could be argued that Queen Elizabeth’s concern over magic is because of the Doctor, just as Shakespeare’s eyes were opened to the otherworldly. In The Day of the Doctor¸ the Eleventh Doctor even blames the time fissure on “witchy witchcraft,” while Clara is “the wicked witch of the well.”

“You Burnt Like The Sun, But All I Require Is The Moon.”

Elizabeth wasn’t the only English monarch to be touched by the Doctor’s world in a negative way. In 2006’s Tooth and Claw, Queen Victoria is horrified with the life the Doctor and Rose lead:

“I don’t know what you are, the two of you, or where you’re from, but I know that you consort with stars and magic and think it fun. But your world is steeped in terror and blasphemy and death, and I will not allow it. You will leave these shores and you will reflect, I hope, on how you came to stray so far from all that is good, and how much longer you will survive this terrible life.”

It was not witchcraft that tortured Victoria though; instead, a man who becomes an animal. A werewolf. Well, technically, it’s more of a lupine wavelength haemovariform: ‘lupine’ coming from the latin, canis lupus, pertaining to a wolf; ‘wavelength’ likely referring to the light of the moon; ‘haemo’ alluding to blood (a disease of which supposedly turns men into wolves); and ‘variform’ meaning shapeshifter. 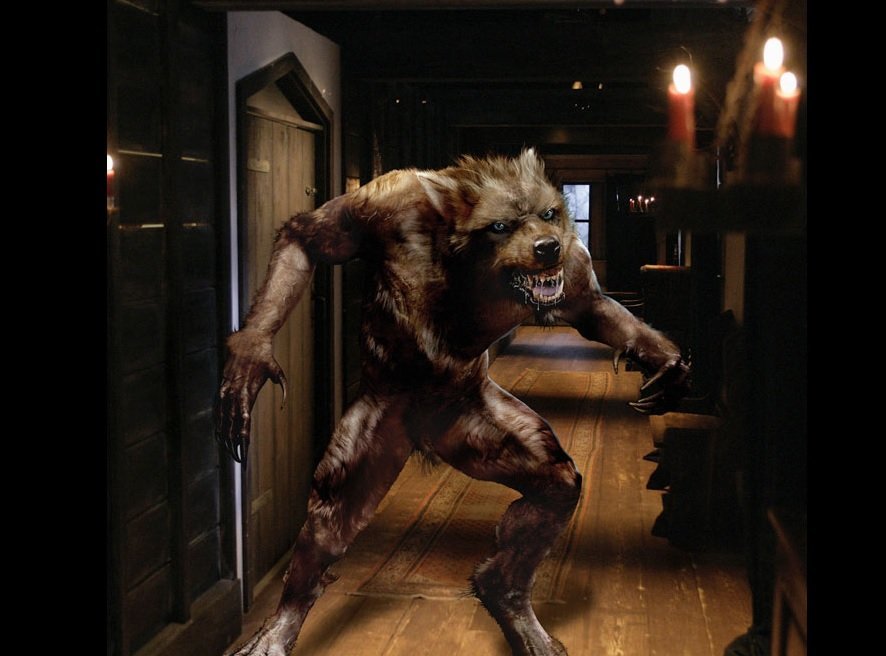 Therianthropy (the mythological ability of humans to change into beasts) has long been ingrained in European culture, likely dating back to the Late Stone Age. Could the savagery of the battle with Neanderthals have resulted in the blurred distinction of man from monster?

Long before Charles Darwin’s On The Origin of Species, many tribes believed there to be a link between mankind and the animal world; some thought we were descendants while others merely believed their shamans could channel the spirituality of animals. Similarly, in Tooth and Claw, the monks turn from God and instead wish to control the rage of the wolf. Essentially, it’s not the lost faith of the monks that the Russell T. Davies-penned episode details, but their worship of the supernatural and the devil, something which horrifies Queen Victoria enough to convince her that the Doctor and Rose, too, live in darker hues.

Rosemary Guiley notes, in her Encyclopaedia of Vampires, Werewolves, and Other Monsters:

“Most demonologists considered it to be an illusion, the product of insanity or disease caused by the devil. Some believed that people made actual transformations into wolves with the help of demons. Coinciding with the witch hunts were regional hysterias over wolves that ravaged the countryside, killing people and animals.”

A theme of metamorphosis is its relationship with mental illness. While in modern medicine, the delusionary clinical lycanthropy is linked with psychosis, the Doctor ponders that haemophilia is just a Victorian euphemism. The relationship between the illness and bloodlust could’ve been strengthened by the work of Greek physician, Galen, whose research dominated the profession for over 1,300 years. He chalked those with a ravenous hunger, delirium and other bestial qualities as having lycanthropy. Its core treatment was bloodletting (as part of his theory of the Four Humors: that an imbalance of either black bile, yellow bile, phlegm, or blood was the cause of illness). 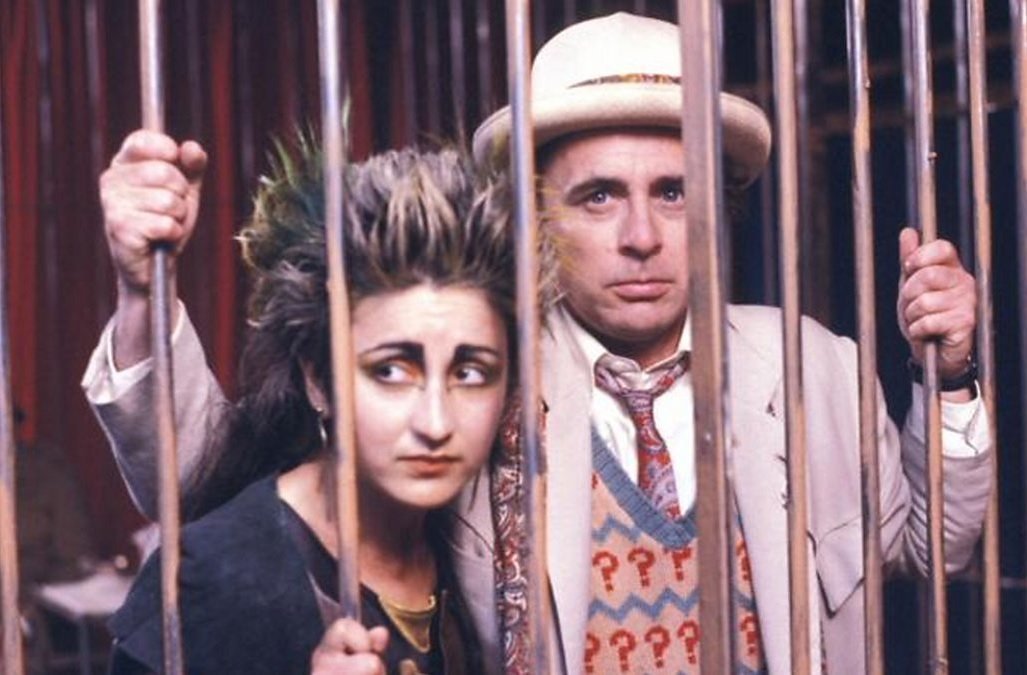 Another notable example of therianthropy is ailuranthropy, the transformation into a cat, something featured in the 1989 tale, Survival. Script Editor, Andrew Cartmel, was disappointed in the final design of the Cheetah People, believing they would’ve looked better if approached like Jessica Martin’s Mags in The Greatest Show In The Galaxy (1988-89).

She is, of course, another great example of werewolves in Doctor Who – indeed, the first on screen!

Though we see her physically transform, for much of the serial, she exhibits the melancholy Galen noted about the illness as a mental condition. It’s probable a large part of this is due to her slavery to Captain Cook, but even after his plan goes wrong and she is freed from him, fear of her animalistic instincts continue to haunt her.

She remains a sympathetic character, manipulated by events out of her control – until, that is, the Doctor convinces her she can resist her instincts.

Nonetheless, she is somewhat a plaything of the Gods of Ragnarok, and with these omnipotent beings, we find an example of giants in Doctor Who.

They’re not the traditional idea of giants but in power, they certainly tower over us. Throughout the show’s history, we see beings of great potential as confined to humanoid size, perhaps most notably Sutekh in Pyramids of Mars (1975), Enlightenment‘s Eternals, and the Destroyer in 1989’s Battlefield. Fenric, also, may be considered an extreme example of a giant: in classic folklore, they are typically thought of as chaotic, unruly creatures, so these wild beings who ruled in Dark Times fulfil that role. Despite appearing in various religions including Christianity, Hinduism and Islam, there’s usually a clear distinction between giants and Gods – in fact, the two are frequently in battle! 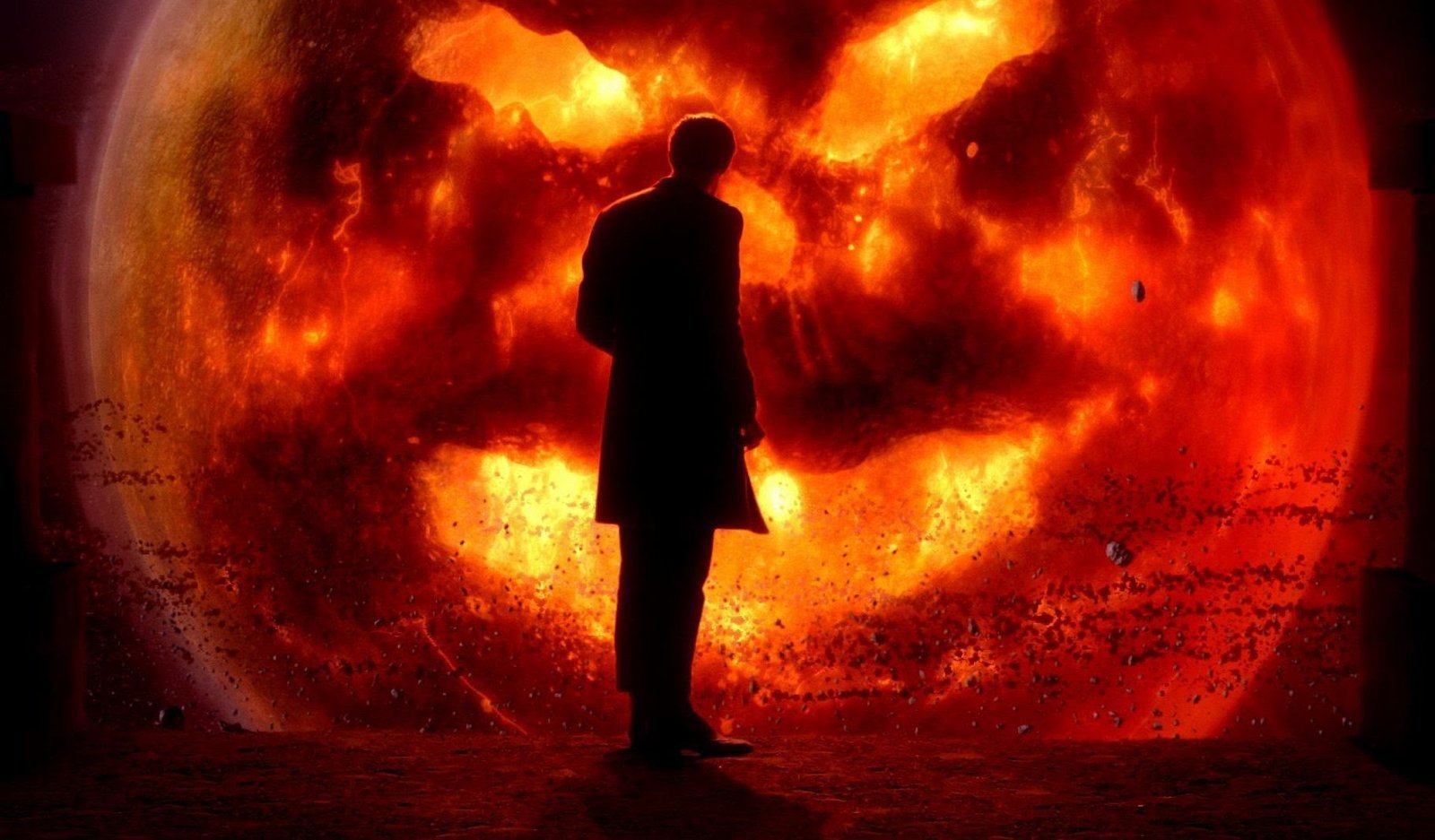 Nonetheless, in the Whoniverse, many enormous aliens are worshipped as Gods. The Swampies figuratively and literally looked up to the titular monster in 1978/79’s The Power of Kroll; the shape-changing Azal was a sizeable devil; and most recently, the Doctor faced up to the Old God in 2013’s The Rings of Akhaten.

There are plenty of instances where larger creatures menace the Doctor and co. – though they’re not actually giants. Many will recall ‘The One With The Giant Maggots’ (The Green Death) from their childhoods, while further examples include the minotaurs in The Horns of Nimon (1979-80) and The God Complex (2011), the biomechanoid in Dragonfire (1987), and the very imposing Fisher King from last year’s Under the Lake/ Before the Flood.

Whereas traditional ideas of giants paint them as inherently bad, Doctor Who has often strayed to The BFG notion of friendly, smarter beings or at least individuals. The moral of Galaxy 4 (1965) is to not judge a book by its cover: the Rills appear huge and fearsome, with large scales and even larger mouths, yet they are pacifists. They also seemed to value their size; in the Target novelisation of the serial, female Rills finds bigger heads attractive. Another misunderstood giant cropped up in 1979’s The Creature from the Pit. Erato was a victim, rendered mute and incapable of escaping the cavernous pits of Chloris. The eponymous 1974 Robot, too, unwittingly killed and was, after all, wronged by humanity…

That’s the thing about wolves, witches and giants: they’re all brutish reflections of us. 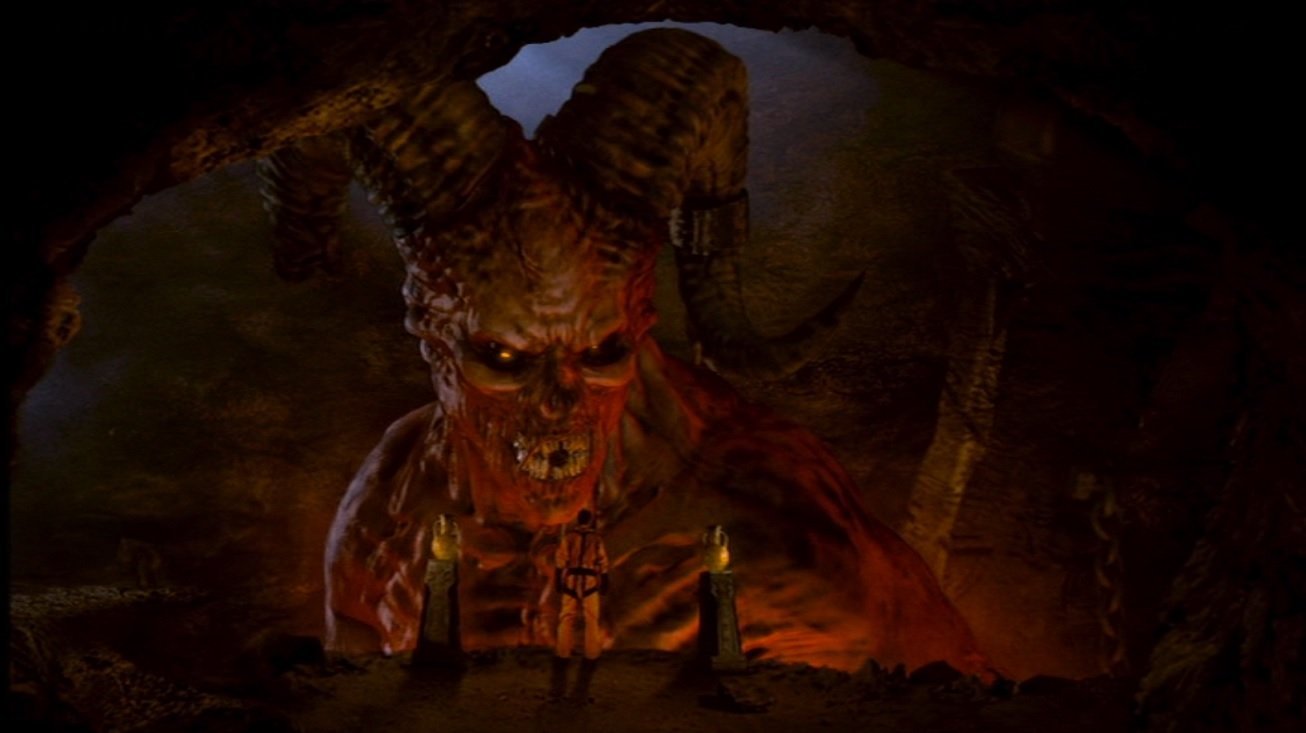 Just look at another notable giant, the Beast in 2007’s The Impossible Planet/ The Satan Pit. As the Doctor explains, it plays on our very basic fears. That’s what the devil does, argues Danny. Yes, or a good psychologist.

The perfect example of how imaginative and subversive Doctor Who is came very early in the show’s history, in a storyline that featured giants… sort of. Planet of Giants was a complicated production, filmed as part of the first block of stories but retained as the opener for Season 2. The audience were initially led to believe the TARDIS had landed on a planet where everything was enlarged, but we soon discover that the Doctor, Susan, Ian, and Barbara have, instead, shrunk down, meaning the other humans became the giants. With malicious intent, murder, and hints of violence, the tale ponders the role of giants subtly but effectively.

In the end, we’re the monsters. But that’s a story for another day…

Horror in Who: Wolves, Witches… 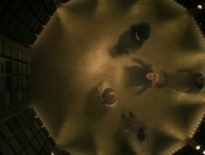 Features Horror in Who: Ghosts 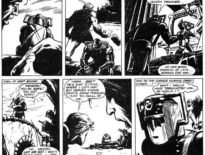 Features Throwback – Even a Cyberman Can Cry
4