Some 20,000 years ago on the (mostly) abandoned planet Zygor…

“It was supposed to be your Christmas gift!” says the Doctor defensively. “Merry Christmas.”

Their captors, a band of Zygons, chortle wispily at the situation with a certain mercilessness before returning to their experiments on the TARDIS with great urgency.

Held captive in the heart of a craterous rotunda and bathing in the cosmic alpenglow, the Doctor and Clara wriggle desperately. There, bound to tall, ossified stakes, they lay in wait above a raging fire pit. Their only escape from the torturous heat is their pressure suits and the steady snowfall drifting from the oculus above.

“Believe me, if I had known, I wouldn’t have called Mariah Carey off,” he says. “But look on the bright side, you love turkey at Christmas!”

Clara rolls her eyes: “In what way is – burning alive – on the Zygon homeworld, a present!?”

“Look up,” says the Doctor, his eyes rising to the sun – a massive red supergiant – above.

“In about twenty millennia, your people get around to calling it the Manatee Neubla in the constellation Aquila,” he explains. “As you can see, it’s presently in its death throes as the centre of the Zygon planetary system, but you, you know it best as the Christmas Star.”

She turns her head to one side; the dying star glistening in her eyes.

“Even with the Zygons?”

“Especially with the Zygons,” she says, both of them laughing now. “It’d hardly be Christmas with you without an alien supernova poised to kill us.”

“I wouldn’t worry about that, Clara,” says the Doctor reassuringly. “We’ll be incinerated long before then. Both our escape suits are equipped with highly combustible reserves of liquid oxygen.” His mouth opens with an epiphany: “Oh!”

The Doctor, still wearing his sonic sunglasses beneath his helmet, directs its controls with his eye movement, scanning the components of Clara’s re-breather system. “Oh.”

“Just making some… adjustments,” he says under his breath. “Keep an eye on the Zygons.”

The Zygons, boffins of their species, are preoccupied almost entirely with the TARDIS; moving back and forth busily, their hands grazing their workbench’s orifices and spines which together act as the laboratory’s interface. Anchored from the ceiling, the TARDIS is perched between a pair of Tesla balls in an electromagnetic field. With each touch of the panel, the radiation increases. Clara overhears one of the Zygons whispering to another…

“What fortune! With the Time Lord’s TARDIS, we can plan our final departure and rendezvous with the resettlement,” says the Zygon balefully. “The children of Zygor will once again unite.”

“Our final departure approaches,” another whispers.

“United once more!” they chant in unison.

The Doctor stretches his leg out, kicking a tube loose on Clara’s spacesuit – he mumbles to himself only semicoherently: “Post is… three metres tall – four, if you include the underground bits – assuming an additional two feet and another tenth of its overall length. And provided it’s made of Skarasen bone – which feels right – we’ll allow for a density of a hundred and seventy five kilograms per metres cubed, or rather, fifty one kilograms – doubling that, to include your weight, Clara – brings us to a payload of just over a hundred kilograms.”

“Right,” says the Doctor nervously to himself. “I can do a hundred kilograms. Easy. Piece of cake.”

“Doctor, what are you up to, then?” says Clara.

“But what do rockets have to do with me?” Clara says. “Have I taught you how to use a jetpack yet?” he asks hurriedly.

“Make sure you lean forward when you’re taking off. You’ll have a lot of weight on your back. You’re familiar with the javelin, yes?”

“You’re not actually suggesting, I…” says Clara. The Doctor returns her incredulousness with a blank stare. “You are too! You’re mad, Doctor, you know that?”

“I’ve remotely converted the necessary components, you’ll only need to fly for a brief moment to dislodge the post – provided you don’t land in the furnaces,” says the Doctor. “Get ready, Clara, we don’t have much time.”

“Wait!” says Clara, closing her eyes and tilting her head towards the sun.

“Why are you closing your eyes? Are you tired?”

“I’m wishing. That’s what you do with stars, yeah? You wish on ’em,” Clara says.

“That’s only for shooting stars and only upon their surface – and only in Delta A’estfoillium,” says the Doctor, nervously looking at the Zygons. “Really, Clara. Now’s probably not the time to get superstitious.”

“I wish… I wish…” says Clara, a smile forming on her face, “I wish you and I never run out of Christmases.”

“It carries on, you know,” says the Doctor.

“The star,” says the Doctor, gesturing his head towards it, “it carries on – way past Earth. Never gives in. The light from its supernova forges onward. And everywhere it goes, it begins a new story, a new mythology with a new name. New Christmases. Forever, Clara. They’re all out there: waiting to be discovered.”

“When can we start?” Clara says.

A small stream of liquid oxygen begins to sputter from the back of her spacesuit, steadily gathering strength.

And even after all these years, long after Zygor perished in the wrath of stellar armageddon, Clara’s wish would stay true to the day she spoke it. To the end of time itself and back again, together or not, neither the Doctor nor Clara would ever run out of Christmases. 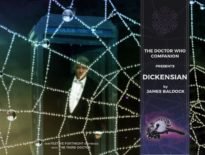 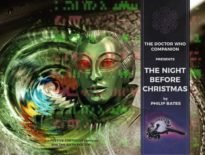 Fiction Fiction: The Night Before Christmas
0