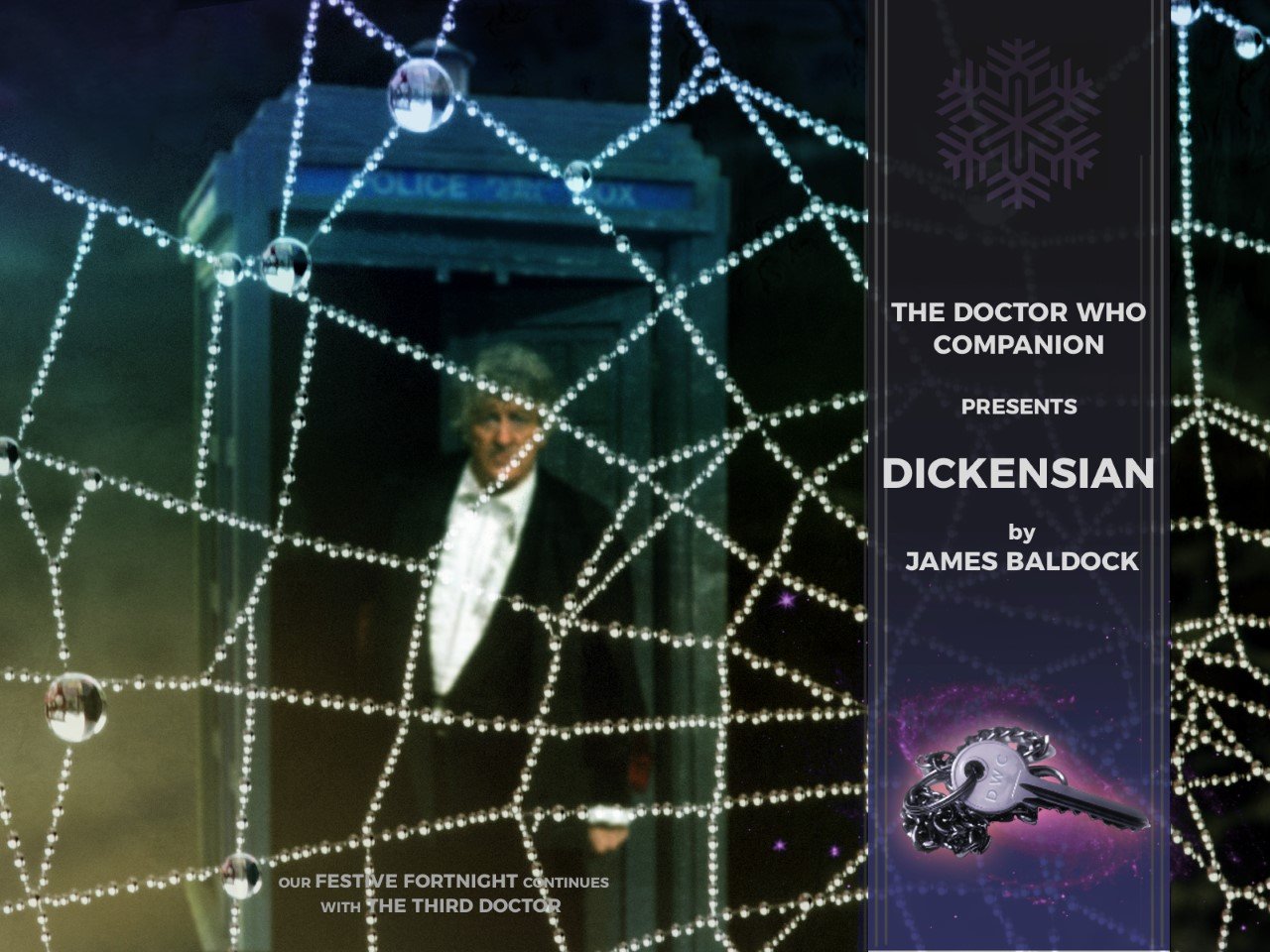 It drifted through the fog, then louder, although no more coherent.

The Doctor sat up.

He was in the TARDIS. The central column stood inert, a silent beacon, lit artificially by the UNIT spotlights he’d rigged up. Around him, a mass of wires, gathered circuitry, cannibalised machine parts. He remembered: he’d been adjusting the binary feedback loop and had decided to reverse the –

Something’s wrong with it, Sarah. It’s not flying as it should.

Sarah had probably gone home. Seated on the floor, elbows propped, the Doctor surveyed the scanner: UNIT HQ was quiet, or at least his lab certainly was. Calendars – difficult things to track when you were a Time Lord – flashed through his brain. December 24th. The regulars had absconded to the pub: a skeleton staff remained, reluctantly pacing corridors, watching desks, ready to spring to action at the first time of invasion.

A noise from the other side of the console room made him look up. Then another. Two men: one he recognised, short, bowl-haired. He remembered those checked trousers, the clothes he wore when he hadn’t cared for fashion. His breast pocket bulged; the Doctor could see the recorder’s familiar shape beneath the cotton. Hoped to God it wouldn’t be played.

The other a stranger. And yet –

The Doctor surveyed the mass of curls, the prominent dentition, the tattered coat, the ridiculous scarf. That inane, slightly crazed expression. The curls were stuffed into the brim of a fedora. In one hand he held a small paper bag, which was on its way to his pocket.

The Doctor rubbed his temples, tucked one leg under the other. “This is one of those…encounters, isn’t it?”

“Oh dear,” said the Second Doctor. “What on earth am I doing here?”

The tall stranger regarded him. “You mean you haven’t worked it out yet?”

“Well, I know this is my TARDIS. But I have no idea who either of you two are.”

The Doctor rose to his feet. “You mean to say you don’t remember meeting me?”

“Yes. The business with Omega.”

“No bells rung, I’m afraid.” The Second Doctor scratched the back of his neck. “I’ve forgotten. Or it hasn’t happened yet.”

“Yes,” the stranger agreed. “Tricky business, time. Everything out of order.” 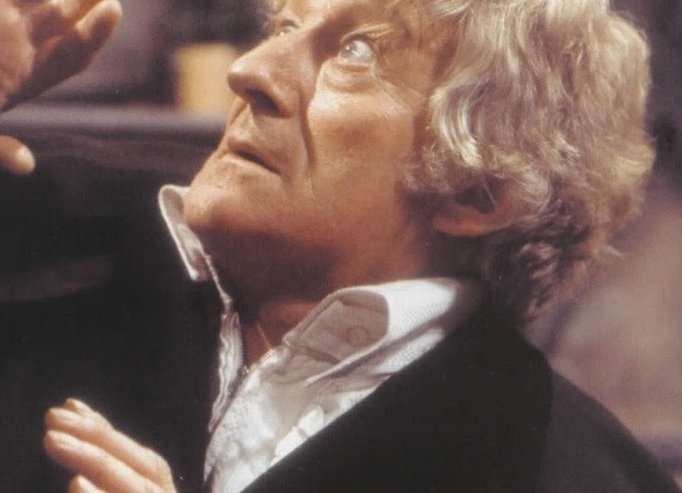 The Doctor raised an eyebrow, smoothed his jacket. “So which one are you?”

The Doctor regarded his successor’s outfit with disdain. “You mean I’m going to dress like that?”

“You always did have a flair for the debonair,” the Fourth Doctor said, grinning in apparent delight at his wordplay. “Eventually, you’ll be less concerned.”

“But how are we here?” asked the Second, incredulously. “Our timelines aren’t supposed to cross! It violates the – ”

“It’s my fault,” the Third Doctor admitted. “I was fiddling with the binary feedback loop. I’m trying to get the TARDIS to work.”

“You mean it isn’t?” his predecessor asked, apparently horror-struck.

The Doctor glared. “Yes, it is, after a fashion. But not as I’d like. Clearly my attempts at repair have disrupted the space-time continuum and folded space in on itself. Which is why the occupants of three console rooms are now sharing the same physical space.”

“And you say it’s not the first time it’ll happen?” asked the Second Doctor.

“No,” said the Doctor. “And neither of us was exactly thrilled about it the last time.”

“First for me.” The Fourth grinned joyously. “I say, isn’t it Christmas? We ought to have a party. I could murder a macaroon.”

“Do I like macaroons?” the Second Doctor asked the Fourth Doctor.

“Splendid. And what about me?” he continued, glancing at the Third.

“Yes, well,” the Doctor muttered. “Our party was yesterday. There are some leftover vol-au-vents in the UNIT fridge.”

“Look, seeing as you’re here,” the Doctor said, “is there anything I ought to know?”

“Yes.” His counterpart stared at him, suddenly serious. “You’re getting complacent. There are other planets besides Earth, you know. Other people to see.”

The Doctor glared with righteous indignation. “My good man, I’ll have you know I’ve spent a great deal of time fixing this TARDIS.”

“Yes, and now that it’s working you’re not using it.” His older self paced the room. “You’re cosied up with the establishment you claim to despise. UNIT’s all very well, but don’t you think it’s time you moved on? You were once like him,” he said, indicating the Second Doctor. “You ought to think about being like him again.”

The Doctor took this in, surveyed the two untidy wanderers, his past and future.

Am I, in my own way, still running? Or was Gallifrey builded here, among these dark satanic mills? The lights in the console room flickered. “Looks like we’re leaving,” the Fourth Doctor said. “I can see my own console room again.”

“As can I,” the Second Doctor added. “The distortion must have healed itself.”

“Yes. Wonderful thing, the universe. Well, goodbye my dear fellows. I must say it’s been a pleasure.”

“Cheerio,” the Second Doctor said. “Until the next time, I suppose.”

The Doctor straightened his cravat. “There’s one thing I don’t understand,” he said. “I never remember these things afterwards, until they happen again, whereupon I remember them happening the last time. So do they happen at all? Or are they purely in my head?”

“Shared unconsciousness,” the Fourth Doctor mused. “Jung could write a book, simply about us.”

“Perhaps we can never be sure,” his younger self said. “Perhaps it’s simply what we take from the experience that counts.”

“So will I remember this?”

“Not consciously.” The Fourth Doctor smiled again. “But that’s how people with many selves live, isn’t it?”

Painstakingly, the Doctor sat up. Sarah Jane squatted next to him, anxious.

The Doctor blinked and stared at her. “I thought you’d gone home.”

“I had. I left my handbag. Had to come all the way back.”

“It’s a jolly good thing I did! What on earth happened?”

The Doctor considered. Already the memory had started to fade, although he clung to the Fourth Doctor’s reminder. “I think.” he said. And then, after a moment, “Well, let’s just say that I’ve just seen a ghost.”

Sarah Jane nodded, knowing to let the matter rest. “Come on,” she said. “The pub’s still open and I’m buying.” Suddenly her gaze was drawn to a small, white paper bag lying within an arm’s reach of the Doctor. “Hey, what’s that?”

The Doctor turned. Wondered how it had got there, if the experience had been only illusory.

He decided to ignore it. Introspection could wait: sometimes, living in the moment was more fun.

“Tell me,” he said, gathering the crumpled bag in a manicured hand and passing it over. “Would you care for a jelly baby?” 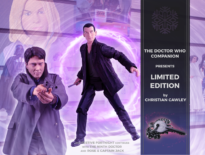 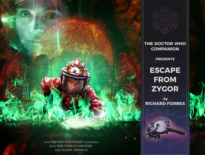