While I find quite a few problems with Last of the Time Lords, I enjoy much of The Sound of Drums. In fact, there are only two things I don’t like about it.

The first is ageing the Doctor. Nothing especially wrong with that – just a personal preference. (Oh, but I really dislike him being turned into a tiny thing in the next episode: why get two of the best actors on TV – David Tennant and John Simm – together at last, then reduce one to CGI?!)

The second thing is… The “Next Time” trailer from Utopia.

Yeah, that sounds odd, but hear me out. At the end of Utopia, the Doctor, Martha Jones, and Captain Jack Harkness are stranded in the far, far, far future, while the Master goes off to have adventures. It’s a neat idea that the Doctor locked the controls so the TARDIS merely yo-yoed between the two time periods it had just been in. (How exactly does the Doctor undo that, given the Master can’t? A question for another day perhaps.) That’s why we don’t see Tennant, Freema Agyeman, and John Barrowman in the “Next Time” trailer for The Sound of Drums.

Oh, but the promise was there: a Master-only episode! 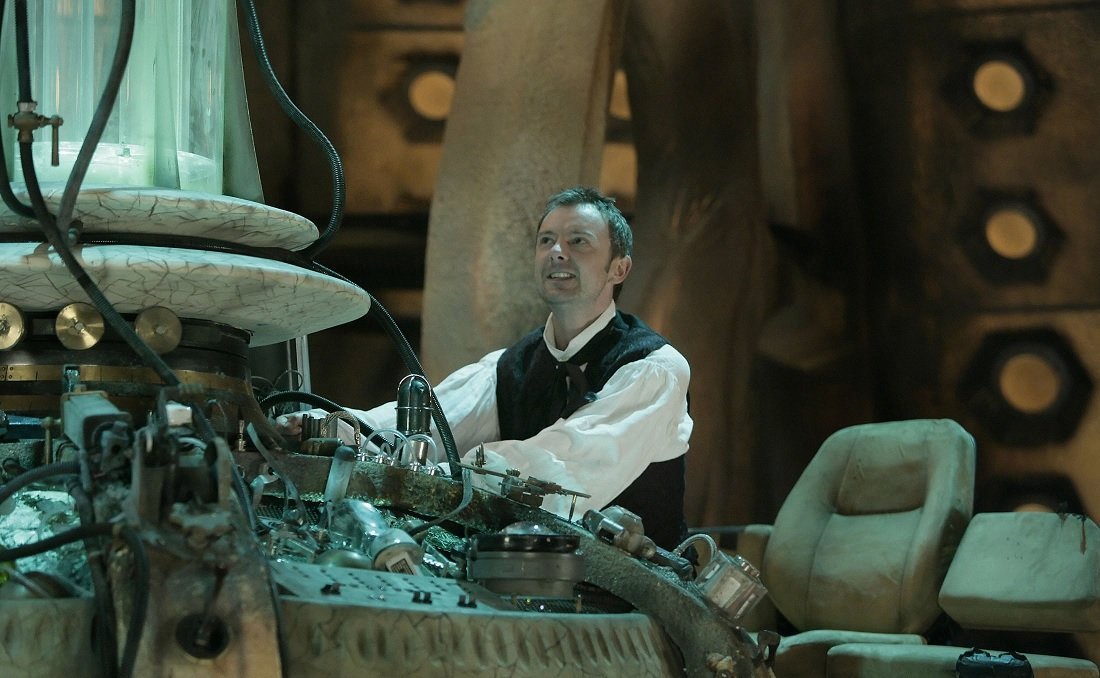 Forget “Doctor-lite” – in my head, The Sound of Drums would solely focus on one of my favourite actors, John Simm, as one of the show’s most notable and exciting villains. No Doctor. No companions. Just the Master living his life, plotting, and winning over the public.

And it makes me question not only if that would’ve been better but also why we’ve never been treated to such a thing before or since.

Don’t get me wrong; there’s plenty about The Sound of Drums I enjoy, most prominently the Doctor and co. being Public Enemies #1, 2, and 3. I love the trio being forced “underground,” and the ingenuity of the Doctor wiring up their TARDIS keys in order to negate their identities. It’s not that they’re invisible. Just that they’re unnoticeable. Lovely. Really, some beautiful writing there.

It’s arguably the most interesting finale of Russell T. Davies’ series finales because it’s Doctor Who mixed with Enemy of the State. It’s not the crew of a spaceship on the lookout for those fugitive time-travellers: it’s the whole world. It’s us. Everyone. They’re truly outnumbered. Martha can’t even react as she wants to when the Master unveils her family being shipped off to prison.

I also think the Master’s surprisingly intimate phone call with the Doctor is a stunning scene. The two play it wonderfully, and the dialogue isn’t mopey or melodramatic. It’s playful and tense and fitting – two old mates, reminiscing, catching up, and concluding with one of those friends completely turning the conversation on its head.

It also shows the Master’s bloodlust, his quest for power. “What did it feel like, though? Two almighty civilisations burning. Tell me, how did that feel?” he asks the Doctor. “You must have been like God.” The Sound of Drums could’ve been a perfect opportunity, ending where the episode actually opened, with the Doctor, Martha, and Jack finding their way back to Earth. Sure, it’s problematic – there wouldn’t be time for much of Last of the Time Lords‘ plot, and you never get two Doctor-lite episodes in a series, so Blink likely wouldn’t have happened – but spending a lot of time getting to know this Master seems irresistible.

I can appreciate why Russell T. Davies didn’t go down that route. He’s an expert, no question. Last of the Time Lords was a rare episode which I didn’t initially like when it was first broadcast, but since then, I’ve grown to appreciate it much more. The Master trilogy of Series 3 is an underappreciated masterpiece that I think much of the audience did enjoy. Sure, there are niggles, but that’s the same with everything.

Still, it does make you wonder why there’s not been an episode to entirely feature the Master. Something like Mission to the Unknown. Other mediums have done it – the DWM comic, for instance – but never on TV.

Why? I simply don’t know.

It would work. We just need someone brave enough to do it.

The Sound of Drums: The Best O…