The news we’ve all been waiting for is finally here: Jodie Whittaker is the Thirteenth Doctor.

Her best-known role is Broadchurch.

The announcement was made after the Wimbledon Men’s final between Roger Federer and Marin Cilic, as promised on Friday 14th July 2017. Previous announcements have been made via a special Doctor Who Confidential show (for Matt Smith), and a fairly unsuccessful Doctor Who Live programme that introduced Capaldi.

It comes after a flurry of bets on names as diverse as Luke Treadaway, Sacha Dhawan, Alan Davies, Phoebe Waller-Bridge, and Ben Whishaw. Some even speculated that this time would see the Doctor becoming an old face again, ie. McGann, Tennant, or Smith!

Back in March, betting was suspended on Kris Marshall, just as it was in 2013 on Peter Capaldi. Peter announced his departure from Doctor Who on Jo Wiley’s BBC Radio 2 show on 30th January 2017, so this reveal comes 167 days after we knew a new actor would be needed as the lead! The Twelfth Doctor will bow out this coming Christmas, with Jodie expected to make her debut in the regeneration scene at the episode’s conclusion. The festive special will also star David Bradley (An Adventure in Space and Time) as the First Doctor, and is the last to be written by outgoing showrunner, Steven Moffat, who’s been in charge of the show since 2010’s Series 5.

Filming on the Christmas special concluded on Monday 10th July.

This is the first major casting for incoming Head Honcho, Chris Chibnall (42; Dinosaurs on a Spaceship), who revealed: “What the BBC was after was risk and boldness… I had ideas about what I wanted to do with it. When I went to them and said, ‘This is what I would do’, I actually expected them to say, ‘Ooh, let’s talk about that’, but they said: ‘Great!'”

There are plenty of more revelations to come, of course: we need to find out who the Thirteenth Doctor’s new companion(s) will be; who will be working on the show; and where it will shoot (with rumour that it’ll move from Cardiff, its home since Russell T. Davies revived it, to Manchester).

Filming for Doctor Who Series 11 is expected to begin in November 2017 – although there’s also talk that it won’t start until early next year, meaning a late 2018 airdate. We’ll just have to wait and see…

Needless to say, the DWC will cover every major development for the show, so stick with us!

Jodie Whittaker Is The Thirtee… 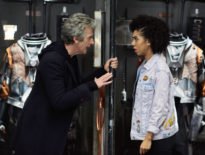 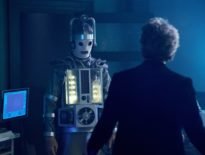 News Cybermen! The Master! Missy! The PodKast with a K …
101