The cemetery was run down, the walls crumbling, lawn unkempt, headstones in need of repair. The ground was a series of uneven bumps and ridges, as if hiding the deceased. The old man stood by an oak that dwarfed its brothers, tugging up his collar against the wind.

Amidst the rustling, there was another noise: he turned, greeting the newcomer.

“Hell of a place for a reunion, Don,” the newcomer said.

“So why’d you drag me all the ways out here?”

“Christ, it’s Halloween. I’m s’posed to be with the grandkids.”

The two of them walked. Clouds billowed above, and there was the faintest trace of rain. The air smelt of fallen leaves and woodsmoke. Will buttoned his overcoat.

“Cold one.” Filling in the silence.

Don gazed off somewhere, his eyes on something neither of them could see. “Yeah.”

Will stopped. Looked. “So tell me.”

Don turned, seemed to see him properly for the first time.

“I was nineteen,” he began.

They’d come here to escape: two halves of a clam, adrift on the tide. It had been a meeting of strangers, a shy series of glances and the elegant dance of a secret courtship, carried out in coffee shops and at zoos, the places the young go. And now here. Renting a boat from Key West and getting as far away from things as they could. Late August: the streets thronged with chess buffs, anxious to see Fischer lock horns with Smyslov. The oppressive heat of the afternoon had given way to a light breeze that wafted in off the Florida straits, rustling the palms.

He supposed he liked it.

They’d left the bustle of the beachfront cafés and terrace bars and wandered inland, the seclusion of the park beckoning them like a gypsy fortune teller ushering customers into her tent, Here even the sirens were quiet: the city seemed to mute itself, leaving nothing but the crickets and the torrent of the Almendares.

“I was just thinking.”

Adelita smiled coyly, rested a hand on his shoulder as they walked. “And am I to know the wondrous thoughts that keep you so distracted?”

“Your parents,” he said. “When were you gonna tell them about us?”

“When are you telling yours?”

He sighed, said nothing.

“Are you ashamed of me?” He stopped, looked at her up and down. Took in her slight frame, the curve of her breasts beneath the light cotton fabric. The glossy hair that shimmered in the moonlight.

“There are…expectations in my family,” he said. “About what I do.”

Adelita was standing by a tree. At this, she leaned against the trunk, sliding one leg partially up the bark Folded her arms and glowered at him.

“And I am incompatible with those expectations. Is that it?”

“No.” Don kept his voice as calm and level as he dared without losing the sincerity. “I wanted…I wanted to be sure.”

She raised an eyebrow. “You –”

He moved closer, steadily. “Adelita, when I’m with you it’s like the world stops. No – it’s like it stops and it moves too quickly, like it’s stopped all the time we’re together but actually life is moving incredibly fast, too fast, and it’s always over so quickly and I have to be somewhere else and not with you. And when I’m not with you I get this tightening, this sense of longing and when I’m with you again it bursts. It’s like a flower unfolding. Everything I am is you. Everything.”

He moved closer still, keeping his eyes locked on hers. “I wanted to introduce you as the girl I’m one day going to marry.”

Adelita’s lip wobbled very slightly, but she retained her composure. “And if they disapprove?”

He smiled. “Then to hell with them.”

“She bit her lip. “You’ll have nothing.”

Impulsively, she kissed him. The evening breeze calmed to a sudden stillness, and in the quiet of things he felt his heart would melt. He placed a hand at her breast and the other round the back of her head, drinking deeply, wanting her.

There was a rustle.

Adelita looked over, pulled the strap of her dress back in place. “Nothing. The wind. Come on, don’t stop.”

He pulled away and looked.

Leading her by the hand, he walked through a patch of grass that led away from the trees, and towards an open patch of ground not far from the bridge. No sign of any movement, but –

Don regarded the statue with curiosity. It was stone, human in shape, but with long flowing robes and the wings of an angel, its face covered with elegant hands, as if in prayer.

“You always find statues in parks.”

“It wasn’t here before.” 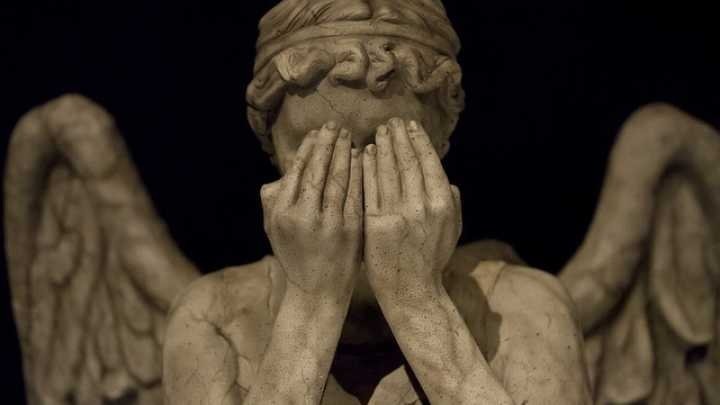 “We’ve never been here before.”

“No, I mean ten minutes ago. When we passed.”

Adelita paused, considering. “Maybe they only just put it in.”

“Well, what then?” Her voice was louder than it should have been, she realised.

Don noticed it too. He turned to reassure her. “I’m just saying, it’s weird.”

When they looked back, the statue was three feet closer.

He felt his stomach muscles tighten. “What the hell..?”

Adelita was suddenly aware of her pounding heart: she didn’t know why, but she felt a sudden impulse to leave, to be as far away from this as possible.

“It’s a prank,” Don said, after a moment. “Or some kind of performance art.”

He glanced behind him. “You can all come out now!” And then, to Adelita, “Probably got a crew set up in the bushe-”

He looked. The statue was ten feet away. The hands were outstretched now, face locked in a snarl.

“She’s moving when we look away,” Adelita said. “Don’t take your eyes off her.”

Steadily, nerves jangling, Adelita moved closer to the statue, which stood, rigid and frozen. It didn’t seem even to be breathing. If it was a trick, Don thought to himself, it was damned effective.

The statue seemed to be grinning at him.

He took to his heels and ran. He ran, and never really stopped.

“And no one suspected you?”

“No one knew we were together. I couldn’t even go to the funeral, when they eventually had it.”

They were standing at a grave, untidy and weathered. Tufts of grass sprang from the bottom edges like the hair on a balding grandfather. The inscription: ADELITA MARIA DE LA FUENTE, 1845-1896.

“Took me a while to find one with the same name,” he said. “Once we had the internet, things got easier.” Don snorted. “No. The math is all wrong. Hundred years out.”

“I like to think there’s a connection. Family, maybe. I don’t know. Anyway, it gives me something tangible.”

“You come up here every year, don’t you?”

“I have to remember.”

Will hesitated. Considered his next words carefully. “Is this why…you’re doing…what you’re doing?”

Will cocked his head a little. “OK, partner.”

Don glared at him. “Don’t you have grandkids?”

Shrug. “You called me, remember?”

He walked closer. “Just wanna know why you’re telling me.”

Don gave him a glance. “She was the first. I married, I married more than once.” He laughed bitterly. “But still. I never…I couldn’t, not after that. And you’re the first person I’ve told. About any of it.”

Will said nothing, reached out instead. Don felt the muscles tighten as the hand squeezed his shoulder. And all of a sudden Will turned and melted into the shadows.

Alone, then. He considered. What he’d become, what he allowed people to think he’d become. A lunatic and a bigot and a fool. The price of victory: you thankless pariah, eater of the oppressed.

Everyone thinks they know me. Everyone.

The flashlights in the distance told him it was time to go; his entourage was anxious. This was no place for him and they knew it. He surveyed the security staff, lingering at a distance, invisible but omnipresent. Watching everything and hearing nothing.

Then he trudged away. A flurry of activity nearby as the security team bustled to their positions. He made for the limo, observing it: paintwork glistening, headlights illuminating the first drops of October rain.

“The hotel, Jacob,” he said, climbing into the back.

Jacob gunned the engine, and the fleet of cars sped into the night.

Halloween Fiction: Day of the … 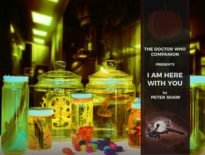 Fiction Halloween Fiction: I Am Here With You 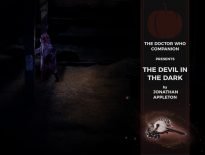 Fiction Halloween Fiction: The Devil in the Dark
0