If you’ve not picked up the DVDs yet, or you’re just a sucker for streaming, we’ve great news for you: Doctor Who Series 9 is coming to Netflix UK next month!

Sure, on 5th December 2017, you might traditionally be receiving 5 Gold Rings, 4 Calling Birds, 3 French Hens, 2 Turtle Doves, and a Partridge in a Pear Tree, but instead, Netflix is giving you the present of: The Magician’s Apprentice/ The Witch’s Familiar, Under the Lake/ Before the Flood, The Girl Who Died, The Woman Who Lived, The Zygon Invasion/ The Zygon Inversion, Sleep No More, Face the Raven, and Heaven Sent/ Hell Bent. We’re not 100% sure just yet whether The Husbands of River Song will be available too, but the good money’s on its inclusion.

Last Christmas, as you may already have noticed, is already on Netflix.

This means you can watch Missy (Michelle Gomez) poking Davros (Julian Bleach) in the eye; Toby Whithouse’s genius tale with (are-they-really-though?) ghosts; the Twelfth Doctor (Peter Capaldi) giving Clara Oswald (Jenna Coleman) a thumbs up, saying he’s not a hugger, then embracing her with delight; Rufus Hound telling some gags on a gallows; that speech delivered by Capaldi, brilliantly; the underrated gem that is Mark Gatiss’ musings on Sandmen (yes, I think it’s brilliant, shut up); Clara biting the bullet as a giant raven thrusts into her chest; the tour-de-force as the Doctor finds himself inside his Confession Dial; and Gallifrey.

It feels right that Series 9 is added to the streaming service, as Capaldi’s tenure is due to come to a close this Christmas with Twice Upon A Time – yes, we’re all gutted too.

Sadly, it’s not available on the US Netflix – although Amazon Prime USA now has 10 seasons ready to stream, and Britbox has the Classic series!

Doctor Who Series 9 comes to Netflix UK on 5th December 2017.

What are your best bits from Series 9? Which serials will you want to rewatch as soon as Netflix makes them accessible…?

Doctor Who Series 9 is Coming … 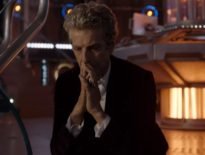 News Peter Capaldi Cried During Announcement of his Dep… 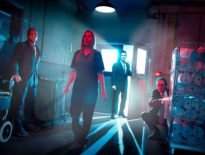