No less than seven (count ’em) Doctors gathered in London last week to meet six extremely lucky winners (can you tell I’m not at all jealous?) of a raffle you may well have bought a ticket for yourself but forgotten about.

This was the amazing prize offered by Comic Relief back in March which promised a fortunate half dozen the opportunity to have breakfast with seven actors who have played the Doctor.

We asked @rankinphoto to take the beauty shot for @rednoseday. And it's very very beautiful. #RNDbreakfastofdoctors pic.twitter.com/M8vBsNsidO

Peter Davison, Colin Baker, Sylvester McCoy, David Tennant, and Matt Smith showed up in person and were joined with the help of technology by Paul McGann and Peter Capaldi who appeared virtually through the neat trick of placing tablets on top of their costumes.

How do you get 7 Doctor Whos to meet for breakfast? Make $800k for @rednoseday projects by raffling 6 seats at the table, and they magically appear. #RNDbreakfastofdoctors pic.twitter.com/l2ClEGQpWn

Emma Freud, wife of Comic Relief co-founder (and one-time Doctor Who writer) Richard Curtis, evidently did much of the work to set the whole thing up and was on hand at The Wolseley Restaurant to tweet all the comings and goings.

And as if the impressive line-up of Doctors past and present wasn’t enough, a couple of other familiar faces came along to pour the tea:

It all made for a memorable day for the lucky fans who won the prize:

Feeling very privileged to of had breakfast with the drs👍#RNDbreakfastofdoctors pic.twitter.com/eHWkxts2Lj

It was all for a good cause, of course – Comic Relief raises money to help disadvantaged people in Britain and across the world and this year’s events have so far raised over £82 million. The charity has a long-standing connection to Doctor Who, dating back to the Steven Moffat-penned The Curse of Fatal Death for Red Nose Day in 1999.

Greatest breakfast of my life. Never had a meal which has transformed so many thousands of lives. Thank you excellent Doctors, noble companions, @omaze and @GivergyUK for raising £600k for @rednoseday projects. My heroes. #RNDbreakfastofdoctors pic.twitter.com/5EZKauqzoO

Find out more and donate online at https://www.comicrelief.com/

Seven Doctors Meet for the Red… 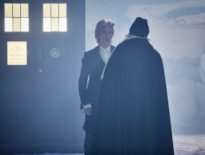