For unknown reasons, fans have had to wait awhile to get their hands on the score to Peter Capaldi’s penultimate series, but there finally seems to be some light at the end of the tunnel as Silva Screen Records has announced that the four-disc set will be released in early 2018. Disc one will contain musical cues from The Magician’s Apprentice, The Witch’s Familiar, Under The Lake, Before The Flood, The Girl Who Died, and The Woman Who Lived.

Disc 2 will contain cues from The Zygon Invasion, The Zygon Inversion, Sleep No More, Face The Raven, and Hell Bent.

Disc 3 will contain the score from the series’ standout episode – Heaven Sent – which, with its classical overtures, more than matches Peter Capaldi’s virtuoso solo performance.

Disc 4 will contain the score to the 2015 Christmas Special – The Husbands Of River Song.

However, not to cause undue worry for those who can scarcely believe it’s about to be released, Silva Screen adds, “the actual release date will be scheduled soon.”

As with previous releases, the first run of CDs will contain an additional booklet collecting Stuart Manning’s retro poster designs for each episode. Merchandise Out Now: Doctor Who Magazine #520 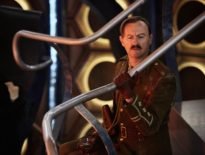 News Mark Gatiss: Twice Upon A Time is “Moving an…
3