Big Finish’s The Blood Furnace serves as a perfect example of what Doctor Who in the 1990s could have been.

Landing in Liverpool in 1991 at a shipping yard, the Doctor (Sylvester McCoy), Mel (Bonnie Langford), and Ace (Sophie Aldred) find themselves in trouble, thanks to the mysterious Dark Alloy Corporation. The enigmatic company has successfully reopened a shipyard and created jobs for many. But there’s a darker side to the corporation and their intentions, one that could lead to the end of the world itself…

As we all know, the original Doctor Who run, discounting the 1996 TV Movie, concluded in 1989 with Survival, leaving McCoy and Aldred wandering into the sunset – off home – to the TARDIS. Big Finish picked up the story, and for the Main Range, reunited the Seventh Doctor with Langford’s Ms. Bush. However, if Doctor Who had continued into the ’90s, this would have been a fair approximation of what it would have been like.

The Blood Furnace has a strong audio fidelity to it that serves well to engage those who miss the days of the Seventh Doctor and his ’80s vibes, but there’s more mature 21st Century story staples as well. Everyone gets plenty to do, but none more so that Mel, who shines as the main character in this story. Her connection to old friend Stuart Dale (discoverer of the Dark Alloy material that has helped so many, and played by Todd Heppenstall) not only builds on her background, but also helps to ground her. A lot of her narrative takes place away from the Doctor and Ace and is better served for it, allowing Langford to grab her character fully from the off and making it her own.

Elsewhere, McCoy and Aldred are splendid as ever, with the former turning out an energetic and excited Doctor, happily working his way thought this mystery with his boots firmly on Terra Alpha. Aldred, meanwhile, flies though all four episodes with her usual bravery and gusto as Ace whilst never losing sight of the conscience the character still carries – at one point having no choice but to kill someone whilst still taking the time to question the decision, thus showing her caring and human side.

The Villain Of The Month however, is far more substandard: marching around and barking orders, trying wistfully to emulate a calculating menace but not achieving more than an arrogant presence. Once she arrives, she’s quickly dispatched of, with help from the Doctor. She will not be missed. There’s also some dabbling into the world of video games, with nods to popular fighting franchises, Mortal Kombat and Street Fighter which were two of the biggest in the early ’90s. Oddly, these are framed and later used as important plot devices, which doesn’t translate well to audio and frankly, seems like padding towards the end of the story.

The Blood Furnace, written by Eddie Robson and directed by Ken Bentley, has some good performances from the regulars and what begins as an interesting story; sadly, towards the end, it peters off somewhat and becomes more forgettable. Still, it’s worth checking out, for its stellar cast.

The Blood Furnace is out now from Big Finish. 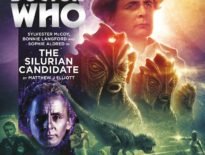 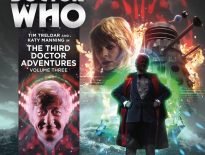