I always find The Ambassadors of Death is a curious beast. It doesn’t reach the highs of its season fellows, but it certainly has a lot going for it, much more than Third Doctor serials like Colony in Space and The Mind of Evil. Its main crime is that it’s slightly too long. Still, it’s often overlooked, forgotten amidst Spearhead from Space, Doctor Who and the Silurians, and Inferno.

That’s why it’s so pleasing to see it as the third release in Obverse Book’s wonderful Black Archive series, and the first to cover Jon Pertwee’s era as the Doctor.

So far, the books can easily be split into two equally-enjoyable angles: academic-like essays (as with The Massacre of St. Bartholomew’s Eve), and more informal examinations (like the Archive‘s debut, Rose). In essence, these are respectively appraisals and celebrations. LM Myles’ Black Archive #3: The Ambassadors of Death falls into the latter category, and that’s more than welcome for a story that deserves its chance in the spotlight.

In fact, Myles’ writing fizzes with enthusiasm, making this a book you devour very quickly – it’s something you really look forward to picking up. Mind you, at around 100 pages (including bibliography and author’s profile), this is a slight tome, so you can quite happily sit back for an afternoon and power through it. This is doing it an injustice, however. Myles’ style might be breezy and personal, but she covers a surprising amount. She effectively splits the serial down, assessing as many aspects of the narrative as possible without going into potentially-stuffy science about radiation.

She first looks at the story’s title (it’s a pretty unusual one after all, not only with the seemingly-oxymoronic combination of “Ambassadors” and “death” but also in the way it’s presented on screen), then moves onto why a trio of heroes works so well both here and in fiction as a whole.

The trio in Ambassadors is, of course, the Doctor, Liz Shaw (Caroline John), and the Brigadier (Nicholas Courtney), and Myles applies the “Freudian Trio” – assigning concepts of the id, ego, and superego – to them. Normally, this sort of psychoanalysis makes me roll my eyes; I find it works fine up to a point when picking apart a tale in retrospect, but it’s also cold and simplistic, devaluing a narrative by applying generalisations that seem to belittle any genius involved. But Myles won me around, noting how the Doctor, Liz, and Brigadier switch between the three notions throughout; she does so while also expressing a great warmth towards the characters, seeing beyond the harsh abstractions.

Subsequent sections see comparisons made with Sherlock Holmes and Dr. John Watson, then John Steed and Emma Peel from the 1960s Avengers. There’s nothing new about these parallels being drawn, but again, Myles’ style makes for a truly pleasurable read. Certainly, many readers, myself included, will feel her pain as she writes, “Every time I see Liz and the Doctor together, it hurts a little that I know they only have the one year, and not nearly enough scenes together.”

It’s not just the leads that are put under the spotlight, of course: the motivations of the supporting cast, notably Reegan, Carrington, and Cornish, are drawn out in “Wealth, Security, and Knowledge”. Here, perhaps more than any other chapter, Myles’ real admiration for the serial shines through: she picks these characters apart and rationalises each in a way you don’t typically see for Doctor Who. Elsewhere, she talks about the roles of women in the serial; of UNIT; of Colour Separation Overlay (CSO), and the ambassadors themselves.

But one of the most fascinating sections deals with British space programmes, both in fiction and in real life. Ambassadors foresees a time where there are crewed missions to Mars on a semi-regular basis. It’s Doctor Who being optimistic, making a leap of faith that nonetheless separated our own universe with that of the so-called Whoniverse. Ambassadors is a product of its time, a phrase which normally means a serial is dragged down by a limiting factor – but actually, it means its positivity tells us a lot about space travel at the time. There was an enthusiasm that seems to have dwindled.

The Black Archive gives a solid summation of our efforts to touch the stars, and it leaves you feeling both amazed and a little sad.

This is followed by an equally-interesting chapter on the class divisions in Ambassadors, which partly tackles something many of us will have been frustrated about: what is commonly referred to as “the old boys’ club”. It’s not something I expected to read about in an analysis of The Ambassadors of Death, but it works.

The only thing that doesn’t quite work is the book’s flow – at least, not entirely. For much of it, chapters segue into each other nicely, but towards the end, it loses this coherency slightly. Fortunately, this is a very small complaint, especially as the writing itself remains refreshing and honest. And the final section, bar the conclusion, included a continuity gem that I’d never noticed before (hint: The Christmas Invasion), which is always an added bonus!

LM Myles’ book is a joy to read, making a perfect companion to an often overlooked Third Doctor classic.

The Black Archive: The Ambassadors of Death is out now from Obverse Books. 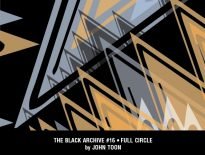