Forty years since it was first broadcast, BBC Worldwide are bringing the complete Blake’s 7 to DVD on March 12th.

The series produced by Terry Nation, the creator of the Daleks, the cult sci-fi series was first broadcast on the BBC in January 1978 and ran for four, 13-episode series until 1981. The programme follows the adventures of a small group of rebels, led by Blake (Gareth Thomas), as they fight against the totalitarian Terran Federation who control Earth.

“I am so happy that BBC Worldwide are re- releasing the DVD Boxset to celebrate the 40th Anniversary of Blake’s 7 because the fans of the programme have been amongst the most dedicated. Hurrah BBC!”

The new release comes loaded with an entire Liberator’s worth of extras:

Blake’s 7: The Complete Collection will be released DVD from Monday 12th March and is available for pre-order now from Amazon for £66.47.

News Why the Thirteenth Doctor Could Prove Popular with… 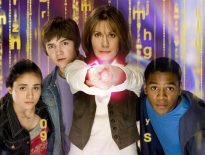 News Watch Every Episode of The Sarah Jane Adventures F…
0