I have to confess that I’m not a regular listener to Big Finish’s Doctor Who range; I used to be a subscriber back in their early days, but let my sub lapse (combination of money and lack of time). Since then, they have produced a huge number of stories and I’m a bit at a loss as to where to start listening. I’m in a similar position, I suspect, to the nu-Who fan surveying the back catalogue of classic-Whos, contemplating a bewildering number of adventures about which I know little, and wondering which are the classics and which are the – well, I won’t say turkeys, but the not-so-classics. (All help and advice gratefully received!)

Yes, I know it’s fatuous. People like me can nevertheless find that said fatuous fact makes it harder to picture Tom in his prime when listening to the new releases from Big Finish; the pictures on radio and audio are better, but I don’t find it always easy to visualise the right things. Stunted imagination. Can’t get the visuals of the older Tom out of my head.

Which leads me to reflect that, in my view (for what it’s worth!), the Big Finish Fourth Doctor stories mark a third stage in the way Tom Baker plays the character. And this is a good thing. It’s been said that Tom Baker played the Doctor in two different ways on TV. The first was the gritty, serious Doctor of the Hinchcliffes, who’s clearly not human and who can be very alien and ‘other’ indeed: given to seriousness, brooding, and sometimes removed so far from humanity that he can come across as callous. The second version was the zany, wisecracking Douglas Adams version, where the humour had taken over and the straight playing was secondary. (The Doctor of the first Williams season was somewhere in between the two, and the Doctor of his final season a throwback to his early days.)

I’d suggest that the Big Finish Tom Baker is different again. The character’s gentler and warmer; an older man who’s comfortable with his own identity and who’s slightly bumbling, calmer, less given to strong emotion. He’s mellowed. The sense of humour now is quieter and more affectionate; he chuckles when he used to bellow with laughter, and smiles gently when he used to beam. He’s kinder and more empathic.

It’s rather as though we’re listening to the adventures of the future Tom Baker incarnation from The Day of the Doctor, rather than a recreation of the character from the ’70s and ’80s.

Tom said it was ‘effortless’ to reassume the part; I think he’s being modest. The performance has developed and it’s a delight to listen to. For those of us who can’t quite picture the Tom of the ’70s and ’80s when listening to these releases, there’s nothing wrong in imagining we’re hearing the adventures of the Curator/Doctor who appeared alongside his future, Matt Smith self. He’s obviously gone back in time and picked up his old companions and is having a very jolly and happy time with them.

And so to this release. Subterranea is a jolly tale: well written (by Jonathan Morris), fun, witty, and recommended. The plot follows the journey of a Drill-town, an enormous subterranean mining machine, owned and run by Mr Maxwell Wilberforce Bell and his loving wife Lucretia: a pair of capitalists clearly inspired by 19th Century Northern mill owners, with splendid Yorkshire accents to match. Lovely performances here from Matthew Cottle and Abigail McKern, no less, who was the second actress to play Liz Probert in Rumpole on TV and whose father, Leo, was Horace Rumpole himself. (Note for trivia collectors: Liz Probert was originally played by Samantha Bond, villain of Invasion of the Bane.) They’re attacked by the Silex, cyborg soldiers clearly inspired by the Cybermen, but written with a great deal more humour, and someone on the Drill-town has done a Tobias Vaughn…

Oh, and Lalla Ward’s in it: brilliant as always. Worth it for the price of admission alone.

(Maybe it’s unfair to compare the Silex to the Cybermen. It would be almost impossible for Doctor Who to have a race of cyborgs that didn’t evoke them, after all. Especially if they’re out to convert humans to swell their numbers.)

In short, I enjoyed this release. Not perhaps one of the best ever Big Finishes; my own favourites are The Spectre of Lanyon Moor and the superlative I, Davros. (Do comment on which are your faves, too, not least because it would help me to know which ones to try!) But certainly a very good story and well worth listening to if you want to spend some time with some old friends, albeit evoking a new era.

The Fourth Doctor Adventures: Subterranea is out now from Big Finish, priced £10.99 on CD or £8.99 as a download. 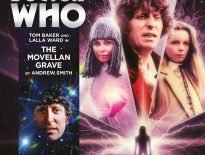 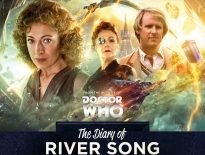 Big Finish Reviewed: Big Finish’s The Diary of River So…
0