Pick up the brand new batch of Target novelisations – City of Death by James Goss, Rose by Russell T Davies, The Christmas Invasion by Jenny Colgan, The Day of the Doctor by Steven Moffat, and Twice Upon A Time by Paul Cornell – and you’ll see gorgeous cover art by the ever-talented Anthony Dry.

Dry’s Doctor Who career stretches back more than a decade now, arguably beginning with his co-founding of Kasterborous, the predecessor of The Doctor Who Companion.

The DWC caught up with Anthony to talk about his approach to each cover, his inspirations, and dealing with the pressure of creating iconic new Target covers for generations new and old to enjoy.

The DWC: Hi Anthony! Let’s start with the obvious question: how did this gig come about?

Anthony: Back in August last year, Bethany Wright, who works as an Editor for BBC books for Penguin/Random House, dropped me a quick note to ask whether I would be interested and available for doing some Target Novelisations. To be honest, I hadn’t worked on anything Who-related for a long time and thought maybe that particular ship had sailed, so this came completely out of the blue. To no one’s surprise, I said “yes, I would!”

What memories do you have of the Target range? Any particular books stand out as favourites?

I had like 98% of them in the end, collected from ‘83 up to about ‘91. I sold them off in the mid-1990s when Who died off a bit and my interest waned, but kept a couple. I think I was the only kid at school really interested in them. The first novel I owned was Doctor Who and the Daleks by David Whittaker and I picked it off the shelf from WH Smiths in 1983 because I loved the cover and it had Daleks in it, but I never actually read it for the first few years. The first novel I read was The Loch Ness Monster which was given to me by my cousin and much easier to read with it being the excellent but easily accessible Terrance Dicks.

But the art was the real showstopper for me. I used to borrow An Unearthly Child out of the school library constantly just because of the cover with the TARDIS illustrated by Andrew Skilleter; I bloody loved that cover with the neon logo. Later on, when Alister Pearson started doing the covers, I was hooked by his mixture of realistic portrait and graphic design, using shape and colour to form the structure of his covers. To this day, I still love Survival and the Mission to the Unknown covers – two absolute beauties.

I gather the brief was to hark back to classic covers while giving them a modern twist. Did you immediately revisit any particular covers to inspire you? Was it you who decided to try Chris Achilleos’ pointillism over, say, Jeff Cummins’ style, or was that part of the brief too?

They wanted it retro and vintage, much like the reprints a few years ago and I understood that. I’m not a dedicated illustrator of sorts, my background is in Graphic Design, so I understood commercially what they were after. You ask yourself, who is the audience? What would they like to see? I don’t normally do the whole pointillism approach, but this time I thought why not? I looked at a few favourites – Day of the Daleks inspired The Day of the Doctor and The Zarbi inspired Twice Upon A Time to a degree, but the others were more my own. I set out to try and give us older nostalgic fans something to get excited about and to try and introduce a younger audience to the delights of these books. Achilleos seemed to me to be the benchmark and I had been illustrating that style for many years in the DVD box sets so it felt natural to go back to. I stopped painting in acrylics and oils in the late ’90s whilst at University so I could never go back to doing anything like Skilleter and Cummins, although they are both amazing artists in their own right.

Take us back to when you were approached to do this. Roughly how long did you have to keep the secret for? Were you allowed to tell anyone? Were you immediately told which stories would be adapted or did you have to wait a while?

I waited nervously for Bethany to come back to me, expecting an email within an hour of me replying but it took days, which led me to think they may have changed their mind! When she finally got back, she revealed the five stories. I was excited for four of them but not for City of Death. Yeah, yeah, don’t kill me, but I’ve never understood the adulation that story has ever gotten; it’s just never moved me. But that’s the beauty of Doctor Who, we all have our favourites and they vary so wildly. I think as an artist you get immediate ideas of each Who story in your head for composition, colour, and layout, and for this, I had zip! I much prefer Tom’s last season, where it was all doom and gloom and Adric.

I told a close colleague of mine who I freelance with, Stuart, and his reaction was “wow, City of Death!!” He absolutely loves it.

So you’re sitting down, ready to work on the Target covers. Where do you start? Researching pictures? Rewatching the episodes? Or getting immediately stuck in?

Yeah, so first things first, pick a cover. Then it’s a real rough layout (circles for heads, scribbles for spaceships, and blobs for space, etc) from the idea I have in my head and then I go rooting for references. Once I’ve found what I consider to be suitable, I take it into Photoshop and do a photo comp of the layout using the reference photos of the characters. This will confirm if I think my idea will work. If it does, I then take it offline and sketch it out with rough line art and fill in the gaps, like space fizz, planets, comets, etc. Then that gets sent to the BBC for approval. Once that gets the thumbs up – and sometimes there’s edits needed; for instance, on Twice Upon A Time, I originally had Mark Gatiss on there but I had to switch him out – I take it into adobe illustrator and set up the sketch and comp on a layer. I then create custom ink brushes and begin outlining and drawing. The stipple is done with individual dots using a mouse. When it’s fully drawn, I can either colour in Illustrator or in this instance take it into Photoshop. It’s a pretty engaged process.

It must’ve felt like a lot of pressure; did you just have to put that to the back of your mind? I’m presuming it’s all been worth it in the end?

It has; however, I waned a little over Christmas. I was doing these covers in my spare time around my full time job and I was a little exhausted. I was also working on Simple Minds’ new album too. It was great to deliver them and I felt relief and thought nothing of it. It was only a week later that it hit me, one day whilst making a brew – “What will people think?” Will they hate them? Love them? I felt really anxious and when they were released as a cover reveal, the dread was real.

What did it feel like, receiving copies in the post? I know your work’s been used on numerous products in the past, but surely there’s an added excitement, knowing the Target range is alive and well again?

It was a really wonderful feeling. They look great, they look and feel like Targets, they read like Targets: it’s all there. People have been very positive over them; it seems to have relit a fire and inspired people. I’ve had the odd grumble and the odd “it’s a Photoshop filter job” comment here and there, but I don’t mind. Art is there to be critiqued and it won’t always be to someone’s liking.

I realise you can’t confirm whether or not more Targets are coming, but if given the choice, are there any serials you’re itching to do artwork for?

I honestly have no clue. What I would say is, they have gone down a storm. I did a signing recently at Forbidden Planet and the queues were huge. There’s a lot of people out there who would get back into reading books with these; I think they should strike while they can and get that range going.

I’d love to do Dalek, The Time of Angels, and Human Nature. If they do, I’d like to think they would keep this current look going for a dozen or so Targets at least and then change over to this new brand to get them started. I’m not sure how well the new logo would work with such bold imagery, but we will see.

As something of a coda here then, I just want to say how wonderful it was going to the Doctor Who Experience and seeing your art everywhere. What happened to them? I fear that the answer involves them being lost after the exhibition shut down…

I never went to see them! Never got invited down, which was a shame, but never mind. Hopefully someone’s got them somewhere rather than them being made into pulp. I guess it depends how they went up. Sad to see that it had gone, to be honest.

Thank you very much, Anthony, for both your time and for the stunning new Target covers, which we absolutely love!

City of Death, Rose, The Christmas Invasion, The Day of the Doctor, and Twice Upon A Time are available now at all good bookshops. 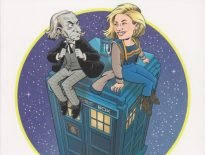 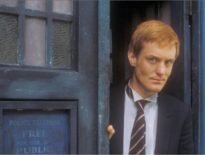