Chris Chibnall has been chatting to Entertainment Weekly (via Digital Spy) about casting his Doctor, Jodie Whittaker on the eve of their appearance at this years San Diego Comic Con.

Speaking about the casting process, Chibnall revealed that despite some stiff competition, the ground-breaking choice was “the easiest decision I made in my whole career”.

He and executive producer Matt Strevens also revealed that they “saw a few actresses for the part” but couldn’t see past Whittaker as the standout candidate.

“She was just so compelling. In a way, it was a no-brainer. The fact that we were casting a female Doctor disappeared really quickly from our minds. We were just casting the Doctor and she felt like our Doctor.” In the same interview Whittaker herself said that she looked forward to being known as the Doctor now and for the rest of her life.

“There is an element of, ‘You are the Doctor for the rest of your life,’ and that’s an honour, and also will be at times probably overwhelming.

“But that’s the joy of when art reaches the masses.

“I’m given this platform, and everyone works their arse off to get it seen, and I can’t moan about that. I have had only the positive so far.” 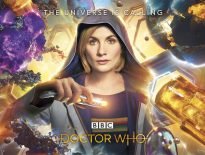