The stars of Doctor Who are once again heading to Weston-super-Mare this bank holiday weekend for the Stars of Time convention.

Ward debuted in Doctor Who in The Armageddon Factor before returning the very next serial, this time as the Doctor’s companion, Romana, in Destiny of the Daleks. She stayed with the show until Warrior’s Gate and has subsequently returned to the Who universe for numerous Big Finish adventures, perhaps most notably the Gallifrey series.

Warner played Professor Grisenko in Cold War, as well as Lord Azlok in Dreamland, but also played the Doctor, albeit an alternate version of the character, for the Unbound range; his list of credits for Big Finish is extensive. Other roles include in Ripper Street, Mad Dogs, Star Trek: The Undiscovered Country, Biker Mice from Mars, and the 1990s Spider-Man animation. In fact, this is a fantastic couple of days for fans of Big Finish because Michelle Ryan, whose Planet of the Dead character, Lady Christina, has returned for a recent audio box set – although you might otherwise know her for EastEnders, Bionic Woman, and Merlin.

Lisa Bowerman will also be at the Stars of Time 2018: she played Karra in Survival, but is most famous for playing Professor Bernice Summerfield, archaeologist and the Doctor’s sometimes-companion. Her Big Finish work is immense; not only did Summerfield launch the audio company but she’s also played different parts in numerous ranges and directed many dramas.

Meanwhile, Sandeep Mohan has appeared in Star Wars: The Force Awakens, Guardians of the Galaxy: Volume 1, and Doctor Strange.

The Stars of Time takes place at the Tropicana on the sea front at Weston-super-Mare on Sunday 26th and Monday 27th August 2018. You can buy tickets online or at-the-door, and beware – there are additional charges for autographs and photoshoots. Head over to the site to find out more.

Lalla Ward and David Warner He… 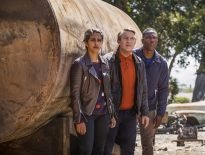 News Doctor Who Series 11 to Air on Sundays, Beginning … 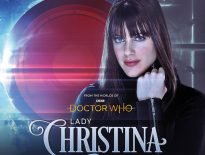