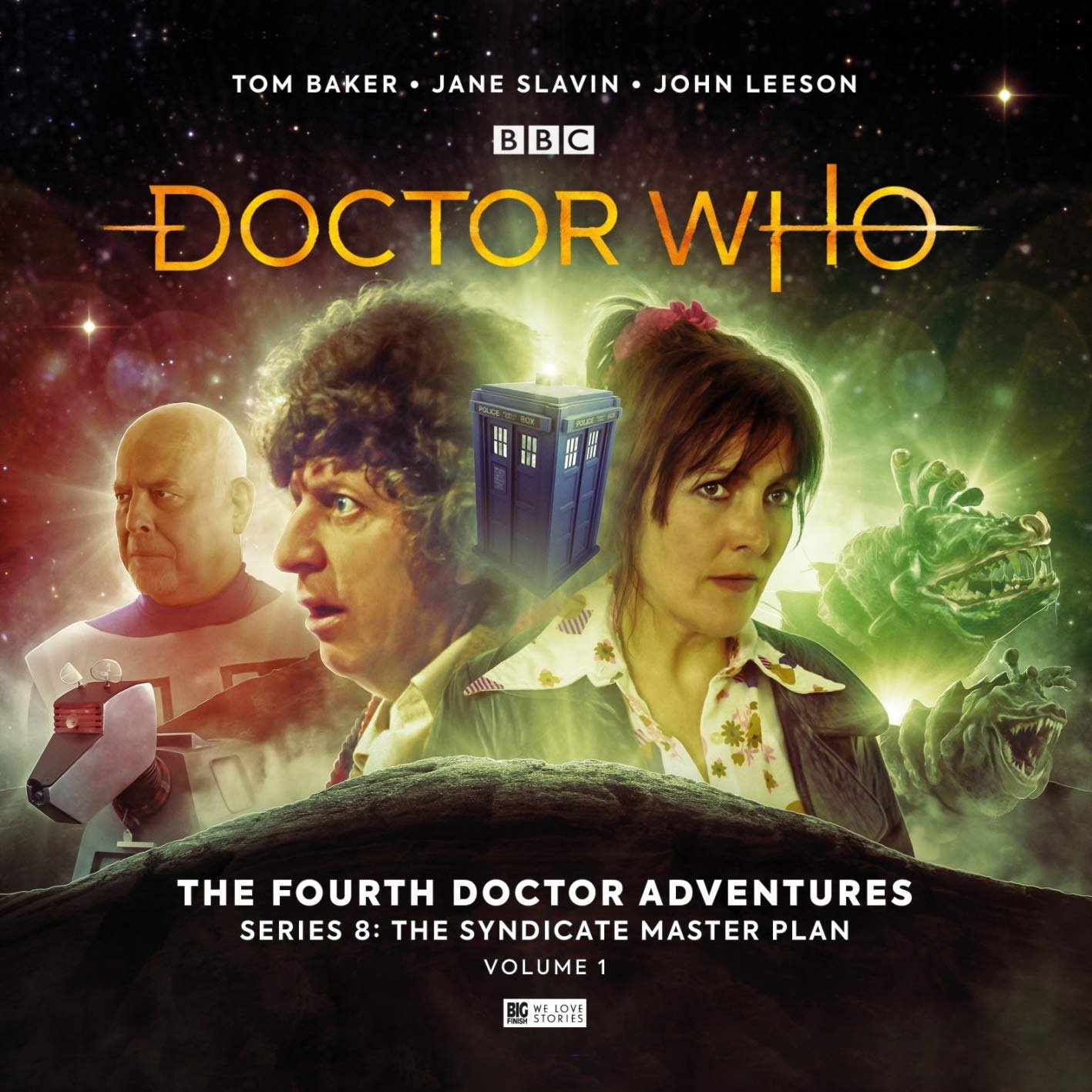 We join the Doctor soon after The Invasion of Time, having taken his leave of Gallifrey. He’s left Leela behind with her readily apparent soul-mate, the charismatic Andred (I can’t even type that with a straight face).

He also left behind K9 but, fortunately, he has who knows how many spares, as he dragged out yet another unit in a box.

This sets up a new series of Fourth Doctor adventures starring Tom Baker in the title role and introducing new traveling companion, Ann Kelso, played by Jane Slavin. So, off we go into the vortex… The Doctor is just tucking into the instruction manual on how to assemble the latest K9 when he receives an alert that that kicks off a well-paced two part adventure. Andrew Smith and director, Nicholas Briggs establish the year as 1978. It’s a nice little touch, setting the story in the year the episodes would have originally aired. The Doctor doesn’t take himself or anything else too seriously, another nod to the Graham Williams-produced era. It must be said that even at 85, Tom’s still got the commanding voice, that, even if ever-so-slightly softened by age, still rules the roost. He amazes me even now.

This is really a police procedural that has the Doctor landing in the midst of what appears to be the every day actions of the ongoing battle of the police – specifically, New Scotland Yard – versus organised crime. The story gives an alien twist to a couple of “standard cop show” tropes and does so well enough. It even briefly touches on the music of the time to give a little atmosphere. The Doctor’s handling of the antagonists is to-the-point and is wrapped up in a fairly neat package. I think there’s something to be said for a two-parter, as it can be a tighter, faster paced story than the longer efforts and this one is no exception.

As to the new companion herself, Slavin does a decent job but nothing that memorable as of yet. She seems pretty one dimensional, and frankly, I’m not entirely sure it’s believable that the Doctor would be all that impressed with her, at least enough to bring her along. That’s a small niggle though. This is the lighter, Graham Williams era Doctor after all, and after just losing Leela, maybe he’s a bit more open to guests.

Of the rest of the cast, the only other one worthy of mention would be DCI Neilson, (Frank Skinner). This was the first time I’ve seen (or indeed heard) Skinner in action since appearing as Perkins in Mummy on the Orient Express. He brings the same wary and world weary account to Neilson and solidifies his character well.

It’s a worthy entry that works to introduce Kelso and also lead us into the larger, overall story to come throughout the series. The Doctor and Ann land in Drashig World, a park specially designed to feature Drashigs of all shapes, sizes, and murderous intent for the amusement of visiting tourists. Unfortunately, the Doctor isn’t aware he’s landed in a park of Drashigs, nor that the park was closed because of a customer death – due to giant Drashig teeth. For the uninitiated, Drashigs are giant, relentless engines of carnivorous death. They detect their prey’s scent and inevitably go through any obstacle in order to rend them from head to toe for lunch. They were originally seen in the highly regarded Jon Pertwee serial, Carnival of Monsters, written by Robert Holmes. Jo Grant still has nightmares 40 years later in the Amazon.

The story bears a lot of resemblance to any chapter of Jurassic Park and the stereotypical characters are all present. The “visionary” entrepreneur Lord Braye (Jeremy Clyde) who will spare no expense; the irresponsible scientist Vanessa Seaborne (Fenella Woolgar); and the officious bureaucrat, Titus Wayland (Andrew Ryan). The standout character is the apathetic Trencher (Lizzie Roper), who alone is a bit more original and forced to put up with Braye. But even with taking several pages from our favourite dinosaur novels-turned-movies, it is via Seaborne’s story that they add a twist that makes the story worth sticking around for.

Tom Baker is more serious here as befits the situation. It’s good to hear K9 (John Leeson) back in action and he’s utilized effectively. That’s more than I can say for Jane Slavin’s character, Ann Kelso. They’ve yet to give her more than an observer’s role in the series. I’d like to see her get a moment, something that sets her apart. Maybe I’m asking too much of an audio series? I don’t think so though, and certainly not when it’s Big Finish we’re talking about. It would be a massive shame if a companion was brought in containing various skills as a police officer and then stood around not taking advantage of them…

This two-part story is also well paced with economical storytelling. Maybe the most interesting thing to come out of it is the introduction of Emerald Drashigs, human sized pack hunters (see: Velociraptors), and this being such a brief look at them, I wouldn’t be terribly surprised if there’s another Big Finish offering simmering in someone’s head.

8.3 The Enchantress of Numbers This was a pleasant and educational surprise. The first half gives us the set up in 1850 Nottinghamshire where the Doctor and Ann meet Ada Lovelace, the “Mother of Computing”, played by Finty Williams. We learn a little bit about Ada’s current living situation and past fame, along with a small dose of intrigue. Near the end of Part One, I was starting to wonder if this casual mystery were a pure historical. That’s not the case though, as Part Two kicks into high gear after an interesting flashback to show how our heroes got here.

The Plague Doctors and the events behind them are the highlight in this story, nicely indicated within. Jane Slavin’s Ann Kelso is gaining ground, seeming more comfortable and being utilized more conscientiously here. The character is developing at any rate. Baker’s his steady and confident self. While the concept and threat are very intriguing, I can’t really pinpoint any spectacular exchanges among the characters except Tom’s usual witty banter.

As I mentioned before, this was also an educational story for me. Although I know of Lord Byron, I was unaware of the amazing legacy of Ada Lovelace, his only legitimate daughter. A brilliant mathematical mind, a “poetical scientist”, publisher of the first algorithm intended to be carried out by a machine and the first computer programmer. In the mid 1800s! This is mind blowing to me. Sadly, because of her sex, she wasn’t recognised for another century. In any case, I’m glad to learn a bit about her, amidst a nicely told story. A proper portent of doom envelops the Doctor, Ann, and K9 as they land on a mostly barren planet. Then, they’re threatened by everything from a Chronon Wave Front to deadly vegetation to a familiar old enemy – but probably not the one you think. This fast paced drama has the Doctor on edge soon enough and with good reason. Tom Baker’s Doctor wonderfully runs the gamut of emotion here while events unfold.

This story does have links to The Daleks’ Master Plan, but again, maybe not the ones you think. I had high expectations going into this simply because of the title and I was not disappointed. There’s especially sharp, delicious dialogue by Adams and a general atmosphere of tension builds in this two-parter. It basically picks up the story thread where The Sinestran Kill leaves off, as police officer Ann Kelso really hates an unsolved investigation. Slavin, Baker, and Leeson have good chemistry here and it seems Slavin has begun to find Kelso’s voice.

John Shrapnel portrays the title character and he’s wonderful in the role, very reminiscent of Kevin Stoney, in fact. The rest of the cast performs their parts well and it all leads to a well and truly proper cliffhanger. This of course means the adventure continues in Volume Two of The Syndicate Master Plan, coming soon. I for one, am anxious to continue the story….

The Fourth Doctor Adventures: Series 8 – The Syndicate Master Plan: Volume One is out now from Big Finish. 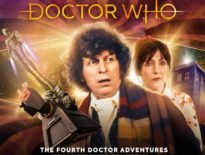 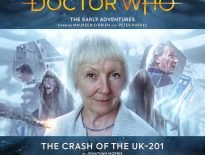 Big Finish Reviewed: Big Finish’s The Crash of the UK-2…
0