Candy Jar Books has announced the second installment in the Travers & Wells series – as well as a paperback edition of the opening book!

This spin-off from the Lethbridge-Stewart range began in 2017 and follows the adventures of Professor Edward Travers (from Doctor Who) and sci-fi author, HG Wells as they travel across parallel worlds en route to the planet, Karfel where the Dominator fleet is about to attack! Along the way, they encounter people and situations that are strangely familiar to Travers and inspiration to Wells…

“The potential of the series was always to be determined by sales and critical response, which, we are glad to say, have both proven to be sufficiently positive. The series itself, and the adventures contained therein, are based on the works of Wells, following the example set by the Doctor Who serial, Timelash by Glen McCoy, which saw a younger Wells encounter several people and situations that inspired some of his best known works. Every book in this range will be a play on a story written by Wells, and not always the most obvious ones. Although, naturally, the first two novels pull from two of Wells’ biggest hits, The War of the Worlds and The Island of Dr Moreau.”

The first book was written by Robert Mammone, who previously wrote the short stories, Eve of the Fomorians and Time and Again, the latter a prelude to Travers & Wells (which is included in the new paperback edition of the book). After Travers & Wells, Robert went on to the write the Lethbridge-Stewart novel, The Laughing Gnome: Rise of the Dominator.

Talking about the reception of his Travers & Wells book, Robert says:

“I am gobsmacked by the overwhelmingly positive reception. You hope that when the results of all that hard work venture into the world readers are at least kind to it, but the lovely reviews on the internet, and the personal comments I’ve received left me feeling giddy. When I heard the hardback had sold out so quickly I looked forward to the day when more people could pick up the paperback, and that day is almost here! Here’s to more readers enjoying the adventures of Travers and Wells!”

Here’s the blurb for Travers & Wells: Other Wars, Other Worlds:

“For a time I believed that mankind had been swept out of existence, and that I stood there with my friend, Edward Travers, the last men left alive.”

Edward Travers, pulled out of time by a mysterious force, finds himself on a hill with a young man called Herbert George Wells. Together the men travel across England, intent on discovering where they are; a world distinctly different from the one they know. And yet, for Edward Travers, it is one that seems vaguely familiar…

For strange, meteor-like objects have landed in the heart of England, and the inhabitants of Earth have found themselves victims of a terrible attack. A ruthless race of Martians, armed with heat rays and poisonous smoke, is intent on destroying everything that stands in its way.

Only things have not turned out the way Travers’ expected, for this is not the war of the worlds HG Wells wrote about, but something much worse.

You can now pre-order the paperback version of Travers & Wells: Other Wars, Other Worlds exclusively from the Candy Jar store, either on its own or as part of a limited bundle with the second in the series, Travers & Wells: The City of Dr Moreau by Andrew Allen.

This exclusive bundle is only available for a limited time, and the only way in which the second novel can currently be pre-ordered.

Here’s the blurb for Travers & Wells: The City of Dr Moreau:

“Wells blinked a couple of times, balling a fist into his eyes to rub away the sweat trickling there. But it was no good; the room was too dark and he still couldn’t see anything. Nonetheless, he was painfully aware that someone – something – was in the room with him. He heard a snuffling, a guttural breathing, and the thing moved closer.”

Edward Travers and HG Wells are flung once again into an alternative reality: a London both achingly familiar and quite unlike the city either of them know. In the dying days of the Edwardian empire, public protests over the increasing use of vivisection in animal research collide with rising fears about looming war.

Connecting both is the mysterious Dr Moreau. Wells is fascinated by the accomplished scientist, but Travers is horrified by the dark truth of the man that he previously had believed to be mere fiction.

As the two men begin to discover the purpose behind their adventures out of time and come face to face with who is controlling their journey, they pursue Moreau to the inevitable conclusion: his very own island of creation, a perverse garden of Eden that’s very close to home…

Head over to Candy Jar to take advantage of these offers! 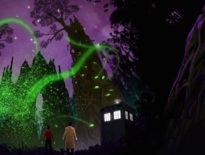 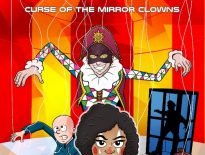 Merchandise The Lucy Wilson Mysteries: Curse of the Mirror Clo…
0