A considerable batch of Doctor Who items are going up for auction later this month, including signed scripts, props, bits of monsters… and the Tenth Doctor’s trainers!

Ewbanks Auction house is set to run a Movie Props auction, which includes items from various franchises, but Doctor Who fans will take special interest in a number of rare lots from various eras of the show. This includes the aforementioned Tenth Doctor Converse, albeit not worn by David Tennant but his stunt double (who’s a Size 9, in case you’re interested).

Admittedly, many of the other Who-related objects are replicas, but there are some hidden gems too, including: an original Seventh Doctor Umbrella; a Shrivenzale foot from The Ribos Operation; Andrew Skilleter’s design concept for the Enlightenment VHS; fake bank notes from The Runaway Bride; a slightly-haunting Jon Pertwee puppet used at the Longleat exhibition; original sections of a Silurian; an arrow from Silver Nemesis; a blaster from Dragonfire (later repurposed for Red Dwarf); and the “3”/Omega grave-marker from Remembrance of the Daleks.

Check out Ewbanks Auctions for more details. The auction takes place on 30th May 2019. If you’re going, take plenty of money because these items rarely go for their estimates!

You Can Own the Tenth Doctor&#… 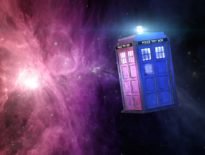