The seventh series of the popular Lethbridge-Stewart novels launches soon, with the first in the Bloodlines sequence written by first-time novelist Gareth Madgwick. Home Fires Burn is set in 1943 and sees the return of the Quarks, which debuted in The Dominators but last appeared in the Lethbridge-Stewart novel, Mutually Assured Domination.

Madgwick has previously written two short stories for the range: The Great Magician and the Spirits of the Vasty Deep in The HAVOC Files 4 collection, and Inheritance in the Lineage anthology.

Home Fires Burn features Section Officer Eileen Le Croissette, based on real-life war hero Eileen Younghusband, on her first mission for the Home-Army Fourth Operational Corps, once again alongside Professor Edward Travers, the ever-popular character from the Doctor Who serials, The Abominable Snowmen and The Web of Fear. It also includes the return of the Brigadier’s uncle, Matthew Lethbridge-Stewart.

“As with The Laughing Gnome sequence of novels, I came up with an arc in which to tell some non-chronological stories. Shaun and I wanted to highlight some of popular secondary characters, so I looked at which characters would make for a good mix. And, to add to the mix, which monsters had not used independently before. In this instance, the Quarks (baring some comics in the 1960s) always tend to appear alongside their masters the Dominators, so I thought it would be interesting to utilise them without the Dominators. And bearing in mind this first book is set in 1943, that presented the author with another challenge. How to use them without the Dominators, and in a time period long before they ever came to Earth. One other element I wanted to include, just so we had at least one Lethbridge-Stewart in the book, was to bring back the Brig’s uncle, Matthew, a character Gareth handled so well in his previous short story. I’m happy to say Gareth produced a great story that brings all these elements together, as well as honours the great men and women who served our nation during World War II.”

“I was thrilled when Andy asked me to write my first full length novel, and even more excited when I found out that I would be writing for Edward Travers, Eileen Le Croissette and the Fourth Operational Corps during the war. After all, an eccentric scientist, a confident young woman and a not completely trustworthy military are what the big old Doctor Who universe is all about if, like me, you started with the Pertwee repeats in the ‘90s. The story really began to come together best after Andy asked me to avoid anything that wasn’t really known in contemporary literature and science of 1943. That led me down the path of some of the wonderful genre fiction that predated the 1950s, when we think science fiction started. A lot of that has influenced the book in its feel. It’s been a blast writing it. Although a massive step up from the two short stories that I’d written for Candy Jar previously, it was a natural progression. I felt that I was combining the character work of Inheritance with the historical research that I did for The Great Magician (although I have to say, Sheffield’s libraries have rather a better selection of Second World War material than information on Owain Glyndwr for some reason).”

“I’ve wanted to tackle the Quarks for a long time and knowing that the book is set in Sheffield during the Second World War, I felt that they should have an authentic wartime look. Added to this, I wanted to feature a different picture of Eileen. After a bit of research, Shaun found a wonderful photograph. I just hope people like what I have done.”

Home Fires Burn is released to tie-in with the 80th Anniversary of World War II.

Shaun Russell, Head of Publishing at Candy Jar Books, explains a little of Eileen’s role in the war:

“With 80th anniversary of the start of the war, we felt that we really wanted to acknowledge the contribution the greatest generation made to all our lives. In 1941 Eileen signed the official secrets act, and wasn’t able to talk about her work in the top secret Filter Room. In 2017 she was featured in The Flaming Soldier and we’ve had so many requests to bring her back. So, here she is launching the new series of books, and this time round her contribution to this story will have major affect on Brigadier Lethbridge-Stewart’s life.”

“The Second World War is an era that has always fascinated me, including the bravery and steadfastness of those like Eileen Le Croissette (later Candy Jar author Eileen Younghusband). Setting it in the beautiful Peak District and also the nearby Sheffield steelworks gave me an opportunity to look into areas of the war effort that aren’t always explored elsewhere, and the sacrifices made.”

1943. Britain’s Home Front is feeling the pain of war.

The Fourth Operational Corps has other things to worry about. A downed plane in the High Peak leads Professor Travers to a village full of buried secrets and a family that are far more than they seem.

Her first assignment sees new recruit Eileen Le Croissette infiltrating a Sheffield Steelworks. Buried within is a weapon that could change the course of the war, but what does the secretive Mr Huxtable have to do with it?

Avoiding his domineering father, Matthew Lethbridge-Stewart is also on the case. But he wasn’t banking on meeting a group of homicidal little robots…

The pieces are being set for another conflict, one that started a long way away, to erupt in the middle of wartime Britain.

Home Fires Burn is due out in the next couple of weeks, and can be pre-ordered now either on its own or as part of the Bloodlines bundle. Series 7 is also covered by subscriptions. 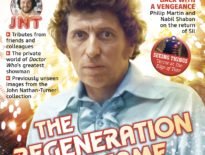 Merchandise Out Now: Doctor Who Magazine #543 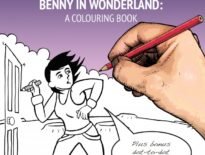 Merchandise Big Finish to Release Benny in Wonderland, Their F…
0