Candy Jar Books is releasing a special book for the festivities – The Lucy Wilson Mysteries: Christmas Crackers, a short story collection about Brigadier Lethbridge-Stewart’s granddaughter. The Lucy Wilson books are ideal for younger fans, but anyone who enjoys Doctor Who will like them too. A Christmas installment sounds like a perfect present for fans, no matter their age.

“We’ve had such good feedback for the series of books. Reviews have been encouraging and fans seem to have embraced the series completely. As a small thank you for all of the support received, we wanted to release something completely unexpected in time for our readers to enjoy over the Christmas period.”

It kicks-off with The Mobile Army, written by popular children’s author Cherry Cobb. She says:

“I was thrilled to be given the opportunity to write a Lucy Wilson story, having read the books I fell in love with Lucy as a strong independent character who isn’t afraid to stand up for her beliefs. I hope my daughter grows up to have the same outlook on life.”

The Christmas Cracker Conundrum, written by Tim Gambrell, follows, and was initially given away for free in 2018. Tim says:

“It feels very fitting, to me, for The Christmas Cracker Conundrum to make its way into print, now, for a whole new set of readers. Lucy Wilson, Hobo and I have been on something of a wild journey over the last twelve months. It started with Shaun asking me to contribute a Lucy Wilson short story to Candy Jar’s 2018 advent calendar, then it ran through my two 2019 novels, and the journey now comes full circle, back to The Christmas Cracker Conundrum!”

“I love the characters, their energy, their individuality and the world they inhabit. And Lucy doesn’t just speak to kids her own age, either. In the best tradition of children’s literature, there’s always something in her stories for everyone. Shaun gave me pretty much free reign with my short story, only specifying that it had to involve Christmas crackers, somehow. That’s more than enough to get the imagination flowing. We all know where the mystery is with a Christmas cracker, until it’s pulled. And if my story makes the readers pause momentarily before they pull their crackers over Christmas dinner, then I’ll consider my job well done!”

Next comes Crimes of Fashion, written by Terry Cooper, author of the popular sci-fi series Kangazang! (which featured Sixth Doctor, Colin Baker reading the audio version). This is his first time writing for the Lucy Wilson series and when he was invited to complete a story he jumped at the chance:

“I read some of the previous books and couldn’t wait to jump into Lucy’s adventures. The story takes inspiration from my teenage years as a rapper and break dancer, when the fashions were highly sought after and everyone was looking for the latest trends in shell suits and trainers. Added to the familiar sci-fi genre, it was great fun to write!”

The fourth story in the collection, Imposters is written by Candy Jar’s very own publishing co-ordinator, Keren Williams. She says:

“I joined the Candy Jar team just after the very first book in the Lucy Wilson series, Avatars of the Intelligence, was published. Since then, I have had the greatest pleasure of working through the entire range. Being given the opportunity to become a writer in the series has really made my year, but I just hope I’ve written something that everyone can enjoy.”

Finally, we have Past, Present and Yet to Come by Chris Lynch. Chris also wrote the acclaimed book, The Lucy Wilson Mysteries: Curse of the Mirror Clowns. He says:

“I also wrote my story for the Candy Jar Christmas advent calendar last year. This story is a light reworking of A Christmas Carol and explores the future possibilities of the Lucy and Hobo characters.”

Popular Beano artist, Steve Beckett, continues at the helm of the series’ artwork, providing a front cover filled with intrigue and festive fun.

Ogmore-by-Sea seems to have gone back to its old sleepy way. But adventure never stops for Lucy Wilson and her best friend Hobo, not even at Christmas…

In the run up to the holiday season, Lucy and Hobo help out at the school Christmas Fayre. But what’s inside the Christmas crackers? Why are people going missing? How does everyone seem to be so unlucky? And who is the mysterious Crone?

A collection of five short stories set between Christmas, the New Year and beyond… this book is Christmas Crackers!

The Lucy Wilson Mysteries: Christmas Crackers is available to pre-order now, and will be shipped in time for Christmas. 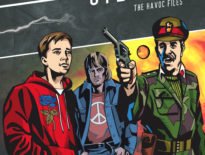 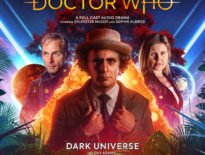 Merchandise 20 Years After Leaving the TARDIS, Ace is Back for…
0