It’s been a year in the wilderness. A barren, parched desert of no content. Actual tears have been shed by journalists desperate to find things to write about, said tears being subsequently used to mop the fevered brows of tortured Who-obsessed sub-editors with all the knowledge and nothing to correct. Over at the DWC, things were tense. Tempers were short. Blows were exchanged. Some of us (no names mentioned, Simon) were on the verge of cannibalism. We had to eat our own shoes.

And then, finally, it happened. “Watch this space”, implored the BBC (accompanied by an aesthetically pleasing, analysed-to-death image of light spilling out of the TARDIS – not since The Phantom Menace has a shadow been scrutinised with this much frenzy) – with a promise of more information forthcoming in the not-too-distant. The internet sort of exploded, although it turned out to be mostly hot air.

Until today. Because at long last, after months of speculation and casting announcements and Dalek sightings, the trailer for Series 12 landed at 15:00 on Saturday 23rd November – a date that’s tediously been designated Doctor Who day, which is a euphemism for “Collective whining from self-entitled fans who don’t understand why the BBC isn’t rerunning Day of the Doctor because HE’S FIFTY-SIX, DAMMIT”. And of course, we immediately jumped on the bandwagon, and you can watch it, right here.

And dare we suggest it’s actually quite good?

We’ve been promised great things for this series. The first episode is supposedly a game-changer (leading to all sorts of rumours, from Tennant’s supposed return to the promise of an entire series of retconned regenerations that preceded Hartnell, which must win the Trump Award for Most Stupid Theory of 2019). Bradley Walsh tells us that some of the monsters are ‘terrifying’. If you were going to be cynical you might say it all smacked of desperation; that the BBC have learned from declining ratings in 2018 and have upped their game. Or perhaps this was Chibnall’s game all along and he’s deliberately been slow-burning his product before ramping up the heat. We couldn’t possibly comment. That, constant reader, we leave entirely to you.

“I’m not where I wanted to be, but I can work with this.”

But seeing as we’re here, let’s break it down a little bit. Series 12 is the sophomore year for Jodie Whittaker’s Thirteenth Doctor, and also sees the return of her companions, Yasmin Khan (Mandip Gill), Graham O’Brien (Bradley Walsh), and Tosin Cole (Ryan Sinclair). They’re all pleasant and correct (no, that wasn’t a typo) and Whittaker herself seems to have developed something of a fetish for tuxedos. “The name’s Doctor,” she announces, in the driveway of some privately owned stately home. “The Doctor.” It’s an absolutely dreadful line and if this sets the pace for things to come then I think we’re in for a long and desperate ride and hang on, is that a Racnoss?

I mean, it’s either a Racnoss, or Taylor Swift woke up on the wrong side of bed. Who’s for the second?

We also get our first glimpse of Stephen Fry, who appears to be playing some sort of government official (the sort of role Fry normally plays these days, with varying degrees of prattishness) – along with Lenny Henry, seen firing a gun from a moving car, and an unidentified gentleman with a moustache. And amidst the flames, accompanied by the sort of echoey drums that wouldn’t sound out of place in a Terminator trailer (which doesn’t bode well, does it?), there’s a first glimpse of a rusty Cyberman – one of the new designs, it would seem – along with some space bats, weird things in gas masks with guns (you can already hear the sci-fi websites making a dramatic slow motion leap towards the hastily departing Empty Child bandwagon) and another exploding plane. There’s also plenty of emotional angst amidst all the explosions, as the word ‘family’ is mentioned. There’s only one possible response to that, and that’s to decisively yank on a console lever.

Ah, there it is. The BBC never get tired of that shot, do they? It’s right there with the “Jodie looking miserable while the camera pans round the TARDIS” look (we get that as well). The Doctor tells us that “Something is coming”, looking by turns frightened and determined, and there’s a thing coming through the doors. Yas sheds a tear, presumably because someone is dead, or presumed dead (either that or someone rubbed an onion over her face). Oh, and Graham gets to try out a rubbish version of the mind-reading helmet from Back to the Future.

So there you are. There’s no doubt that this is going to be scrutinised to death over the next few weeks, as folk take a stab at meanings and interpretations and what counts towards the arc (there will be an arc, won’t there?) and whether or not the Timeless Child refers to the Master – but at least it’s exciting. Things blow up. There are spaceships and aliens and monsters, which ought to please at least some of the people who claimed that Series 11 was too full of angry white men. The use of gratuitous pop music aside (Guardians of the Galaxy really does have a lot to answer for) it feels like Doctor Who, and that can’t be a bad thing.

And what about us? I mean, I’ve been speaking collectively for the past few hundred words but the truth is I’m tapping away at this in my study while my other half assembles a giant cardboard birthday cake next door, and I’ve got one eye on the clock, so it’s safe to say I’m a bit preoccupied. There’s probably a market for a collection of DWC staff thoughts on the trailer – it depends if any of us have anything interesting to say, so no guarantees – but I did ask around just in case anyone was listening this afternoon, and I received a single contribution, from the stalwart Joe Siegler. “My wife,” he remarked, “who was not a fan of Series 11, said ‘That looks better'”.

I agree, Mrs Siegler. I agree.

Watch the Doctor Who Series 12… 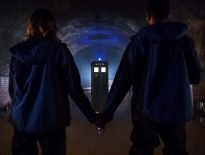 News Doctor Who Series 12 Will End With a Special Episo… 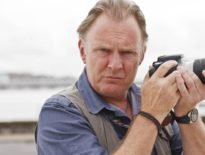 News Goran Višnjić and Robert Glenister to Appear in …
0